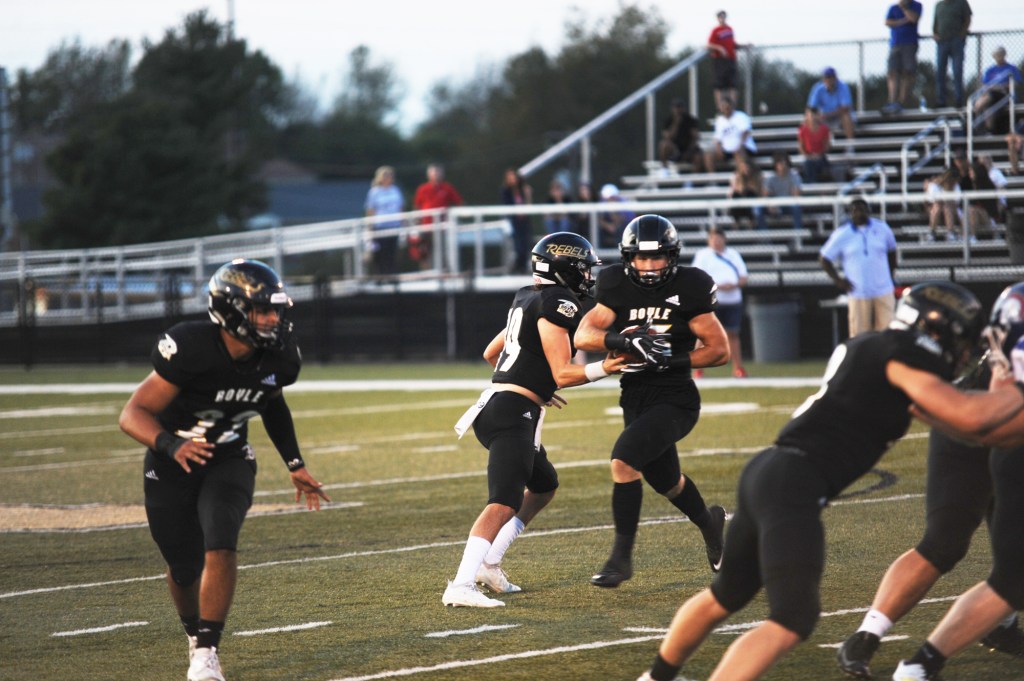 Boyle County football has been as dominant as a team could be through five games in the 2019 season. Not only has it won all five games, but it has done so with an average score of 53-8.4 — ranking first in 4A in both. The Rebels have run the clock against every opponent so far, and have given up less points on the season (42), than they have scored in any individual game except for one — the season opener against Iroquois in which the starters only played two offensive drives.

Last week, Boyle faced what many considered to be its first real test of the year — Christian Academy of Louisville, currently ranked fourth in 3A in the state. The Rebels answered the test with a 71-28 rout of the Centurions in a game head coach Chuck Smith felt his defense didn’t play disciplined.

This week is the second in a three week stretch that many around the state view as a proving ground for a team looking to get back to the state championship.

“We’re going to find out just how good we are during this three week stretch because we’re playing some really good football teams,” Smith said. “I tell our guys that when you get to the playoffs you’ve got to play good teams back-to-back-to-back in order to win a state championship or play for a state championship. This is a good trial run for us.” 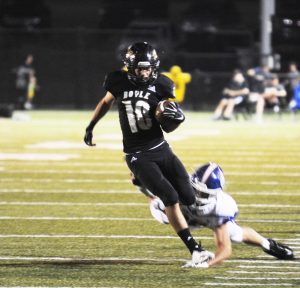 Gray Rahbany during a kick return against CAL. He’s had returns for TDs in two consecutive weeks. (Photo Derek Brightwell)

This week’s test comes in the form of Highlands from Fort Thomas. The Bluebirds enter the game ranked fifth in state in 5A with a 4-1 record. Their only loss came to Knoxville Catholic from Tennessee. They boast a talented defense that has only allowed 10.2 points per game while scoring 34.4 points a game.

“Highlands, I think will compete for a state championship in 5A. They’re one of five teams that could possibly win it. They’re a really good football team,” Smith said. “Sometimes it’s not so much what they do as much as it is how they do it. They do it with such a desire and a passion that makes it good just the way they’re executing.”

The leader of the offense is quarterback Collin Hollingsworth who has thrown for an average of 182 yards per game and completed 12 touchdown passes. He also contributes in the ground game, rushing for three scores this year.

“They’re a really solid team offensively that’s led by a talented quarterback. He makes them go whether it’s through the air or on the ground — whether he’s keeping the ball or hands it off,” Smith said. “Our defense has got to be more disciplined as far as carrying out their responsibilities. They can’t get undisciplined with their eyes and their keys and their reaction to it.”

The Bluebirds defense is tasked with stopping an offense that has had its way with every team it’s played. The Rebels have been able to score from anywhere on the field at any time so far in 2019, but Smith believes that Highlands has “by far the best defense we’ve played” this year.

“They just really throw a lot of stuff at you. They’re going to be moving and pinching and slanting. They’re everywhere over there on defense. Our offense has to be really smart in order to have any success.”

However, as good as the offense has been, Chuck Smith still wants to see more sustained drives from his team.

Kickoff for the night will be 7:30 p.m. at Rebel Field as Boyle continues it’s tough home stretch.