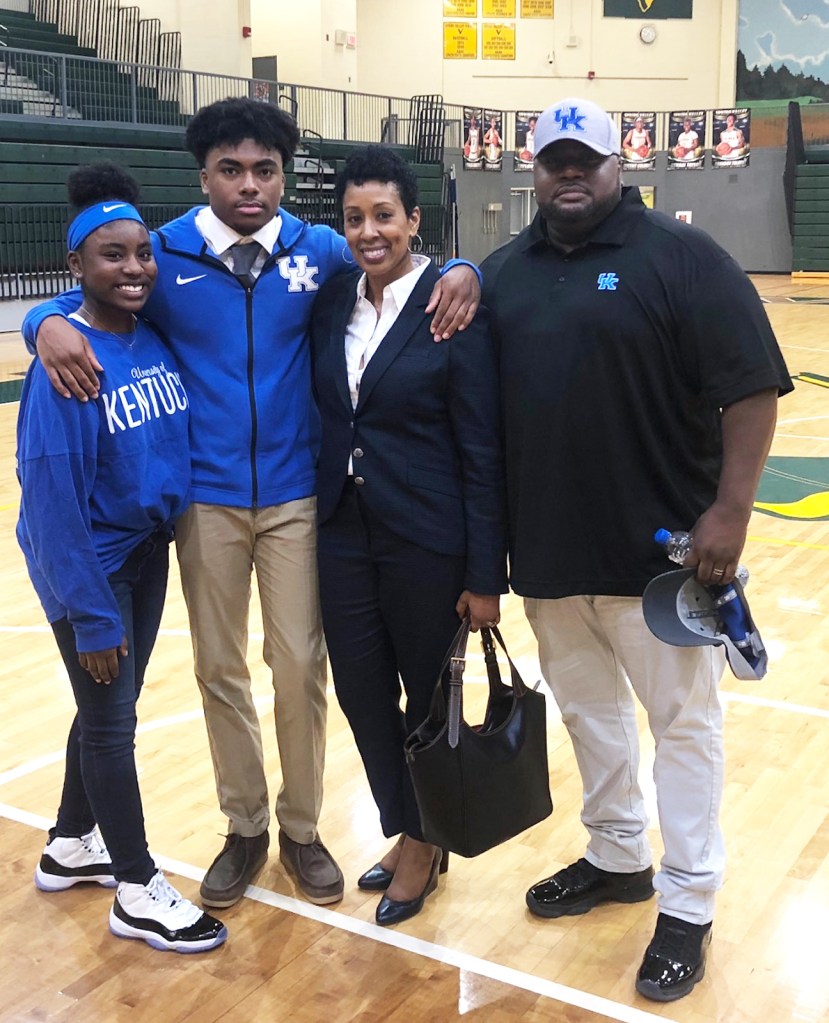 Tony Geiger, right, and his wife, Ramona, liked the way Kentucky coaches talked about more than football with their son, Jalen, before his commitment. His sister, Ja'nia, also is all in with Kentucky. (Photo Contributed)

That’s why what Tony Geiger, the UK freshman’s father, says about Kentucky recruiting coordinator Vince Marrow and other UK coaches is so significant.

“We met a lot of coaches during Jalen’s recruiting journey but what stuck out to me about Vince, coach (Mark) Stoops and the other UK coaches is that they were so genuine. It can be overused but you could tell they care about more about him outside of football than most schools. We talked more about life than my son’s speed, vertical, flipping hips in coverage. That’s very important to all of us in our family.”

Tony Geiger understands that coaches are going to often tell recruits and their parents what they want to hear. Marrow didn’t do that. That’s why 30 days after Jalen Geiger was offered a UK scholarship in April of his junior year he verbally committed to Kentucky. He was ranked as the No. 2 cornerback in South Carolina and had 20 other scholarship offers but immediately shut his recruitment down.

“Obviously there is an inherent risk in shutting it all down but we trusted coach Stoops and Vince to hold to their word and they did,” Tony Geiger said. “After he signed, he was legally part of BBN. They could easily then have just focused on the 2020 class but they continued to build a relationship with him. To this day Vince has kept his word about everything he told us. I am a combat veteran and I am big on integrity and that manifests itself in loyalty. Vince came to one of Jalen’s games on a Friday night when Kentucky had a game at Tennessee the next day. Those little nuggets became cumulative and just shows how Kentucky goes above and beyond what other schools do.”

This Saturday Kentucky will try to beat South Carolina for a sixth straight year under Stoops – and avoid an 0-3 SEC start. The Geigers live in Columbia and even if Jalen Geiger is not on the travel team — he likely will be redshirted this year — the family is going to be all-in with UK just like it has been since his commitment.

“We have redecorated everything down here. We obviously know about the success Kentucky has had against South Carolina and are praying it will continue,” Tony Geiger said. “I walk through town and this UK hat I wear every day garners respect here now. South Carolina fans can respect what the Kentucky program has done and the direction the program is going. Jalens has friends he trained with and played with since elementary school now on the Gamecocks.”

Tony Geiger had a Kentucky connection. He was born and raised in Ohio — his wife is from Tennessee — and knew former UK defensive back Maurice Douglas. He saw that Moses Douglas, Maurice’s son, committed to Kentucky and knew it had to be because of “what Kentucky meant to him and not because his dad went there, so that spoke volumes to us.”

The Geiger family began to do more research on Kentucky football. During Jalen Geiger’s spring break of his junior year, the family went on a road trip to visit schools. That included a stop at Springfield (Ohio) High School where Maurice Douglas coached. The families talked about Kentucky football and Maurice Douglas sent Jalen’s highlight tape to UK.

The next day he was offered a scholarship and UK recruiting coordinator Vince Marrow asked if they were still in Ohio. When they told him yes, Marrow said UK was having a scrimmage they could attend if they wanted.

“Four hours later we were at the scrimmage,” Tony Geiger said. “He had just been offered by North Carolina and Rutgers. We were prepared to go to Cincinnati and fly to Rutgers and then back to Chapel Hill. A day later we were at Kentucky shaking hands with Mark Stoops and it was kind of like love at first sight. We had seen enough schools to see Kentucky was special and knew academically what Kentucky was about. He then committed to UK on Mother’s Day (in May) and shut his recruitment down.”

Tony Geiger attended a Kentucky football game in the 1980’s and he initially planned to move his family to Louisville when he retired. His first job had been at Ft. Knox, so he was going to buy a house and live in Louisville but decided Columbia — where Jalen was raised except for four years in South Korea — was a “nice place to raise a family” and stayed in South Carolina.

Even though Jalen will likely be redshirted this year, the family has no regrets about his decision to play at Kentucky.

“He is very cultured. He is pretty well traveled for an 18 year old kid,”  his father said. “He’s more resilient than the average 18 year old. He may have had some moments about being away from home, but he is really thriving.

“We have seen the growth in him faster than what I anticipated since he got there June 1. His body looks great. He has really m matured. He has embraced the challenge and is excited to have a chance to help sustain what UK built last year.

“We are abundantly blessed and grateful to coach Stoops. It means a lot to us that they have allowed us to be part of Big Blue Nation and we couldn’t be happier or prouder.”