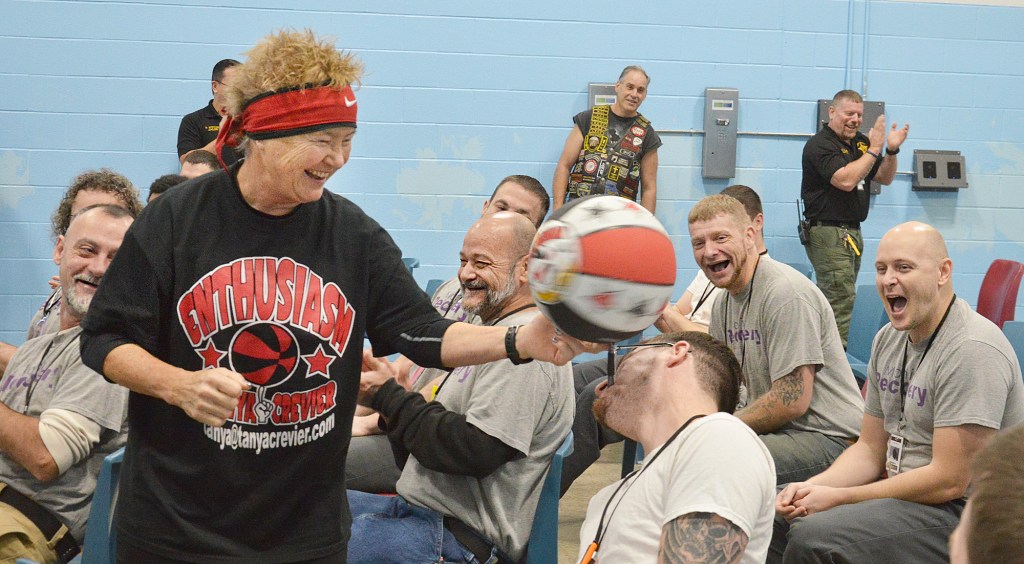 Tanya Crevier balances a spinning basketball on the tip of an ink pen being held in an inmate's mouth, as other prisoners enjoy the spectacle. (Photo by Robin Hart)

A world-renowned basketball handler spun into the Boyle County Detention Center to spread a message of hope and inspiration to a group of inmates on Friday as part of the Behind the Walls ministry. 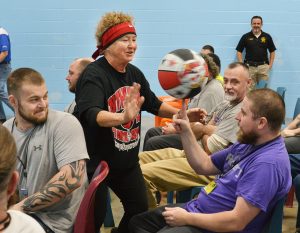 Crevier shows inmate Robert Ledford how he can hold a spinning basketball on the tip of his finger. (Photo by Robin Hart)

As booming music echoed in the jail’s indoor rec room, several state inmates quietly took their seats. They had been given the choice to attend the ministry or remain in their cells, said Jailer Brian Wofford.

Sitting on plastic chairs with their arms folded, the men seemed to be skeptical that the spry little woman in front of them could really spin a basketball, much less be one of the best basketball handlers in the world.

But within just a couple of minutes, Tonya Crevier had the inmates smiling, laughing and clapping in amazement of her skills. She even surprised a few of the men by having them spin a basketball on their head or on the tip of an ink pen — much to the delight of their cell mates.

Crevier has visited more than 1,500 jails during her 39-year career as an inspirational speaker and performer all over the world in schools, jails, prisons and NBA halftime shows..

She told the inmates that enthusiasm requires a purpose and passion. She talked about the importance of goals, attitude, morals and excellence. She said that looking up helped keep their lives in balance, just like looking up at the spinning basketball on a pointed tall pole kept it balanced, but when they looked down, the ball quickly fell.

Before the show, Crevier said her message of hope always comes from her heart. She said she wanted to “let these guys know that people care about them. We want to bring some life and some love and care to these guys.”

Following Crevier’s performance, the group broke into small groups and several members of the Behind the Walls ministry talked with them.

Wofford said the Behind the Walls program and Cevier’s ministry didn’t cost anything. The group contacted him and offered the event, which is something Wofford wants to continue having.

“I think ministry is a very important component to what we do. … The jail is not just a warehouse for people. I want to offer an opportunity for them to change.”

Boyle County Judge-Executive Howard Hunt attended the ministry too. He said “it had an element of spirituality, but it was also a positive statement, positive reenforcement,” to encourage the men move forward and “do positive things in life.”

State inmates who watched Tanya Crevier balance and spin basketballs as part of her inspirational ministry applaud after her performance.(Photo by Robin Hart)

Bobby Roberts leans back for a sip of water as Crevier balances a ball on the bottle. (Photo by Robin Hart)

State inmate Mike Fisher is able to balance three spinning balls with the help and encouragement of Crevier. (Photo by Robin Hart)