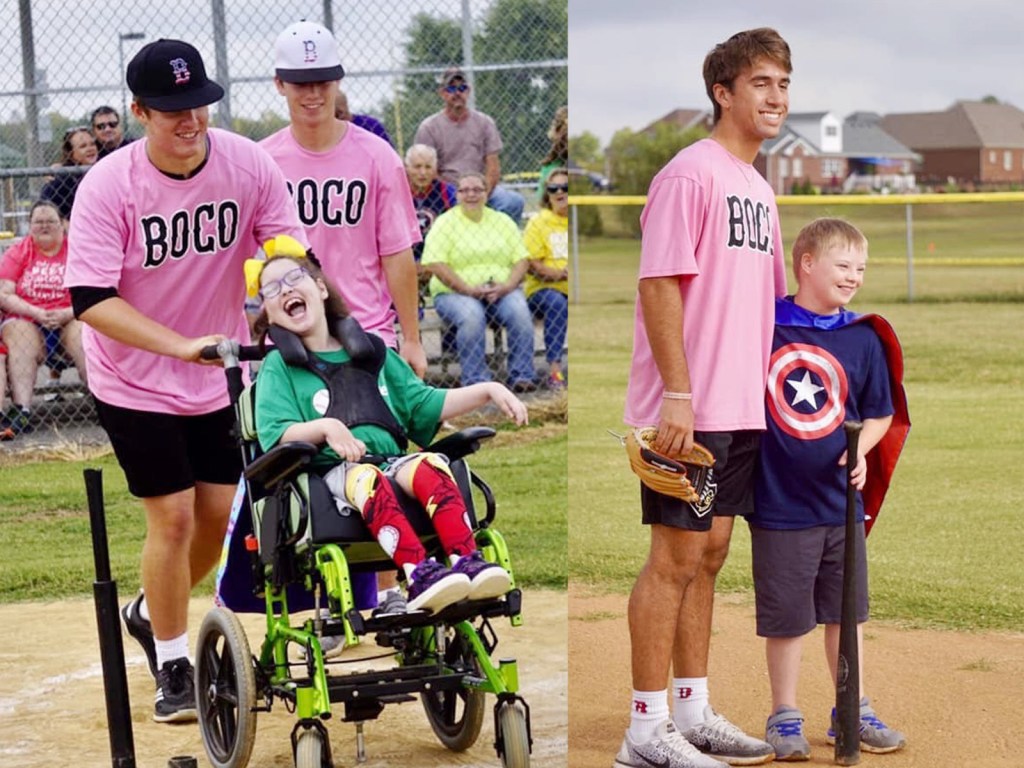 At left, Kendyl Claycomb is ready to run the bases with two of her baseball buddies during an Overcomer game. At right, Baseball Senior Karson Thompson with his Overcomer teammate, Jaxson Stanley. (Photos by Sheila Best)

Life is constantly throwing us curveballs.

How we react to those obstacles thrown at us is what really matters. One parent’s positive reaction has created an amazing organization that allows others an opportunity to overcome challenges.

This organization is called the Kendyl & Friends Foundation, founded by Crimson Claycomb, a special education teacher at Burgin Independent.

Claycomb decided to start the Kendyl & Friends Foundation in honor of her daughter, Kendyl, who was not expected to live to be two months old, but will now be celebrating her ninth birthday in November.

Kendyl contracted meningitis at three weeks of age, which caused her to have over 100,000 micro-mini strokes. Due to this terrible virus, she would be wheelchair-bound for life, nonverbal, partially blind in both eyes, and have to live with seven brain tumors.

Still, Kendyl is alive and a very happy child today. Her mother’s Kendyl & Friends Foundation has provided opportunities for Kendyl and many other children and adults of all ages for fun and socialization. In addition, her mother worked very hard to secure the funding and eventually the construction of an amazing and fully inclusive playground at Anderson Dean Park in Harrodsburg.

One of the fun events hosted by Kendyl & Friends is their weekly Overcomer baseball game. These friendly competitions have been taking place at Anderson Dean every fall baseball season for the past four years.

Recently, the BCHS baseball team was well represented while having fun with the Overcomer’s team one Saturday morning this fall. (Photo by Sheila Best)

Samantha Travillian, an English teacher at Boyle County High School, is the chairperson of the Kendyl & Friends Foundation after it caught her eye in 2016. Travillian gained an interest because of her good friend, Shelbi Hopper, who was in a devastating car accident at 12 years of age and became paralyzed from the neck down.

“As we grew and graduated from high school, it was hard for us to find things to do. We read on Facebook one day that this Kendyl & Friends Foundation was building a fully inclusive, handicap accessible playground at our local Anderson Dean Park. We showed up for the opening event and just fell in love with it.”

Travillian knew that this was something she wanted to take part in. She then contacted Claycomb, who encouraged her to become an intern, later a voting board member, and then into the chairperson role.

Hopper herself, who has been participating in these baseball games for three seasons, says that she has a lot of fun when playing with the Overcomer team. She participates in many other activities with Kendyl & Friends as well.

As one can imagine, volunteers are essential in making these events possible. Having volunteers come help out is “like making new friends,” Hopper remarks.

Another participant is second grader Duckie McDonald, who has just finished playing with the Overcomers in his first season. Being nonverbal, his mother helped to share, “I like playing pitcher and helping my friend around the bases.”

McDonald and the others have also made many new high school friends.

BCHS senior baseball player Karson Thompson and his mother volunteered to help at the first game of the season. Volunteers are assigned to assist a player each game, and Thompson’s buddy has been Jaxson Stanley.

Thompson has truly enjoyed the experience of working with the team. “I really enjoy seeing Jaxson and the other kids having fun and seeing how happy they were, even though they are physically challenged.

“Jaxson was always so happy, talking to me, smiling and saying ‘hi’ to everyone. That was

Thompson continued to attend the games, as did many of his baseball teammates after Head Coach Kyle Wynn was contacted by Travillian regarding volunteer possibilities.

With several baseball players showing up to volunteer for the last two games of the season, Claycomb explains that the Overcomers felt like they were playing with major league baseball players.

“Time is very valuable, and to have a group of teenage boys that take time out of their Saturday mornings to get up and come play ball with a team of special needs kids – it’s life changing. Our kids think that they need the boys’ help, but they don’t understand that those baseball players learn more from showing up than we could ever teach them.”

Kendyl & Friends’ upcoming events include a trip to Devine’s Pumpkin Patch on October 5th and Trunk-or-Treat on October 20th. The foundation is looking for volunteers to help set up and participate not only in these events, but all future activities, as well.