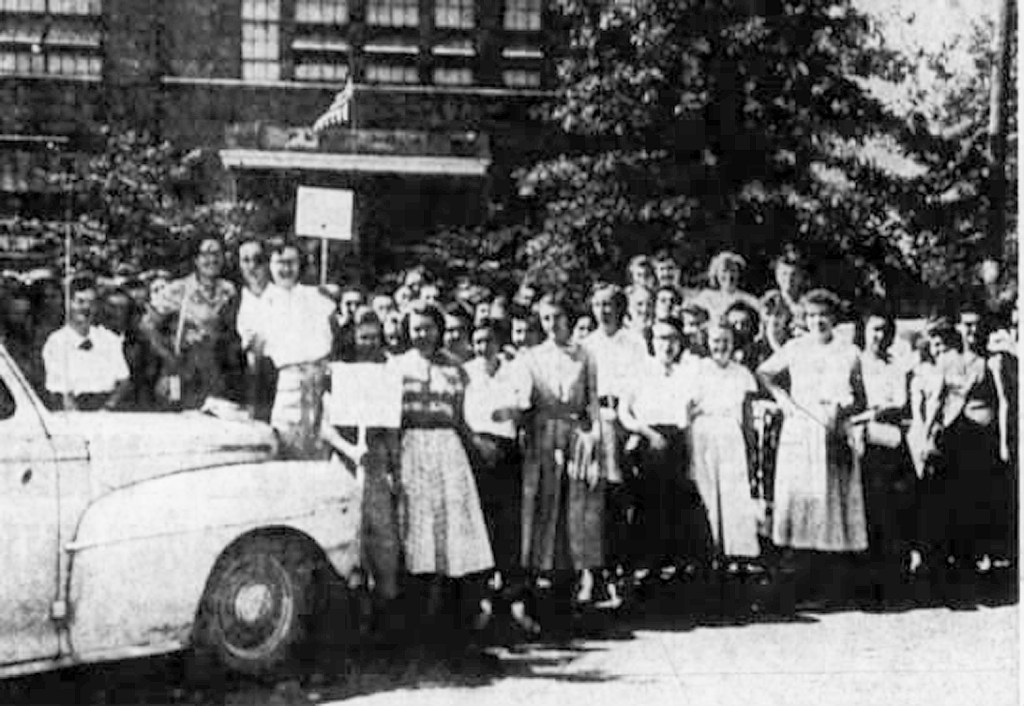 A photo on the front page of the Danville Advocate-Messenger on Oct. 1, 1952, showed around 75 of the workers at the Palm Beach plant on Stanford Road that walked out as part of an "unauthorized work stoppage."

About a fourth of workers walked off their jobs at the Palm Beach plant on Stanford Road as part of an “unauthorized” strike on this day 67 years ago.

The Palm Beach plant, which still stands in east Danville today and is now an apartment building, was employing around 600 people at the time, according to a front-page story from the Danville Advocate-Messenger’s Oct. 1, 1952, edition.

The story estimated that “not more than 27 per cent of the employees were striking.” The vice president of the company tried to downplay the incident, tell the paper “that only 10 persons were ‘on strike’ and that the rest of the group leaving their jobs are ‘out of sympathy.'”

The Palm Beach plant was continuing to produce suits with more than 400 workers still “at their machines and working,” but “some of the operations are curtailed because of the other workers walking out,” according to the paper.

The strike was apparently held “in violation of the union’s contract,” and a representative for Amalgamated Clothing Workers of America said the local union had “ordered the people to return to work at a meeting held yesterday afternoon.”

“A mass meeting of employees off their jobs was held this morning at the town theatre, where the union members marched in a body. They returned later this morning to the Stanford (Road) plant and milled about the front lawns and steps of the building,” the paper reported. “No settlement nor return to work had been effected by early this afternoon.”

“Last year, and for a number of years in the past, there were insufficient funds to provide salaries for keeping the library open more than three hours per day,” the article stated.

The article also took the position that the services the library provides to the community “necessarily must not be constantly crippled and curtailed, but enlarged and expanded.”

“Monotony is an unknown word in the work of the sanitarian of this county!” Webb said in the article. “… The first question people ask is, ‘What is the work and purpose of a sanitarian?’ We try to prevent outbreaks of food poisoning and filth-bourne disease by regular inspection of all places where food is prepared, served or sold, and we strive to have the proprietors of such establishments improve the sanitary standards in and around their places of businesses.”

Webb went on to explain that the local health department is the one who grades good milk with an “A” or a “B” on the lid, depending on its quality. And he explained why the health department tries to get developers to submit blueprints that include plans for sanitary water systems.

“We are constantly aware of the diseases carried by flies and mosquitos, and we are at war against them all the time,” Webb said. “Needless to say, they are not whipped yet, and they never will be, as long as the general public does not cooperate 100 per cent.”