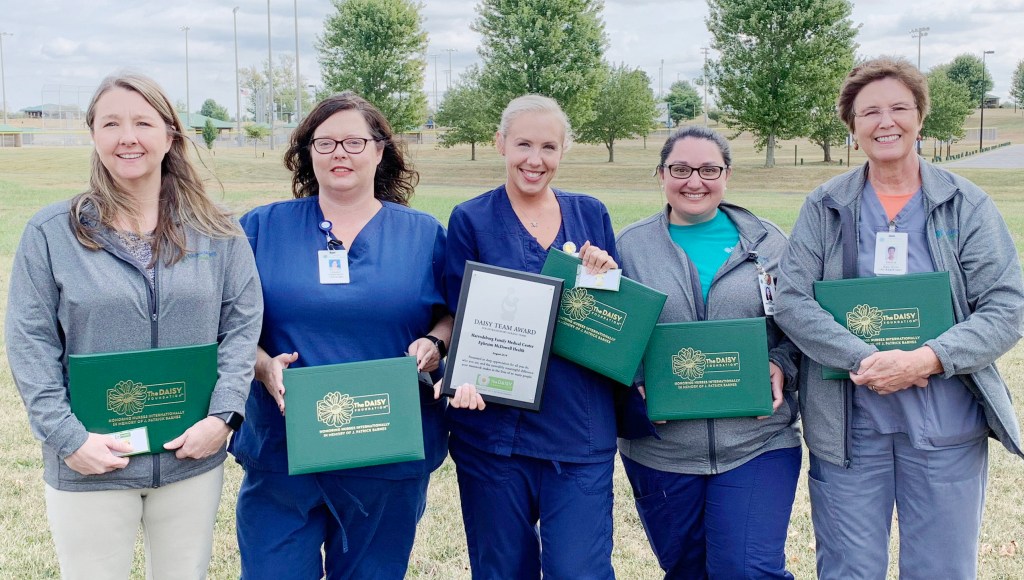 Nurses at Harrodsburg Family Medical Center were recently honored with The DAISY Team Award for Extraordinary Nurses. The award is part of the DAISY Foundation’s program to recognize the super-human efforts nurses perform every day.

The DAISY Award for Extraordinary Nurses has been adopted by healthcare facilities around the world to celebrate nurses for their extraordinary care and compassion. The DAISY Team Award is for nurse-led teams of two or more who come together to solve a specific situation by going above and beyond.

Nursing teams may be nominated by patients, families, and colleagues, and they are chosen by a committee of nurses at Ephraim McDowell Health to receive The DAISY Team Award. The DAISY Team Award is presented once each year at a surprise presentation.

Each member of the nursing team receives a certificate commending them for being an “Extraordinary Nurse.” The certificate reads: “In deep appreciation of all you do, who you are, and the incredibly meaningful difference your teamwork makes in the lives of so many people.”

The team also receives a specially engraved plaque with the name of the team.

The Harrodsburg Family Medical Center nurses were nominated by a coworker that said, “At the end of the day after a patient left the office, he came back inside and told Jamie Lister, the receptionist, there was a patient in the parking lot having a medical emergency. Jamie immediately went to find Carol Baker, APRN, who was in a room with a patient and tell her of the emergency. She, along with Chasity Wilson, LPN, went immediately to the parking lot, followed by Lyndsey Baker, LPN, who brought the emergency cart, only to find that the patient wasn’t in our immediate parking lot, but was up on the drive of Anderson Dean Park, a couple hundred feet away.

“Both Carol and Chasity ran to the site while Lyndsey grabbed the items off the emergency cart (emergency medicine box, AED machine and ambu bag) and came behind them. The patient was still inside the van in the driver’s seat and Carol could not find a pulse and described the man as gray with agonal respirations.

“911 had already been called so Chasity climbed into the van and unbuckled his seat belt and a male bystander helped the girls get the patient out of the van and onto the ground and supported the patient’s head while Carol started chest compressions. When Lyndsay arrived with the AED and ambu bag, the man’s shirt was opened and Chasity started to apply pads while Lyndsay bagged him.

“EMS then arrived at the scene. A firefighter took over compressions for Carol while she then attended to the patient’s wife who was visibly upset. Lyndsey continued to bag the patient until he was placed on the board and then EMS took over. The patient’s wife was unable to drive so a bystander took her keys and parked the van and gave the keys to the staff and after the office closed, on her way home, Chasity dropped the keys by the Haggin ER for the wife.

“While all of this was going on, Jamie Lister and Karen Kelly continued to attend to patients inside the clinic until the rest of the staff returned. I am very proud of the actions of the entire staff and thankful that we had both the staff and the equipment available to make a difference for this man.”

Nomination forms for the DAISY Award are available at various locations throughout Ephraim McDowell Regional Medical Center, Fort Logan Hospital in Stanford and James B. Haggin Hospital in Harrodsburg.