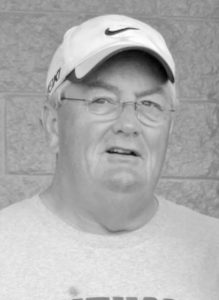 Born Wednesday, October 24, 1951, in Stanford, Kentucky, he was the son of Beatrice “Mama Bee” Sizemore McGuffey of Stanford and the late Lloyd B. McGuffey. Jim was a 1970 graduate of Stanford High School; and also was a member of the successful 1969 Stanford Wildcats Football Team. Jim was a member of the Army National Guard for six years. Jim worked at Enbridge Gas (Texas Eastern) Transmission Company since October 10, 1975; and his recent position there was Area Superintendent. Jim was a member of Highland United Methodist Church, loved to golf, and was an avid UK Wildcat fan. Family was very important to Jim; and he had a deep love for his two granddaughters, Aubrey and Shelby.

In addition to his mother, Jim leaves behind one son, James Casey McGuffey (Jenny) of Danville; one daughter, Haley Sue McGuffey (Damion White) of Danville; two brothers, Joda McGuffey (Dolly) of the Highland Community, and Bowen McGuffey of Crab Orchard, Kentucky; two sisters, Patty Young (Larry) of Waynesburg, Kentucky, and Debbie Collins (Irvin) of the Highland Community; two granddaughters, Aubrey Jane McGuffey and Shelby Taylor McGuffey both of Danville; the mother of his children, Susie Baldwin McGuffey of Stanford; his companion, Brenda Antle of Danville; and several nieces and nephews and other extended family members and friends who mourn his passing.

Memorial Contributions suggested to a charity of one’s choice.