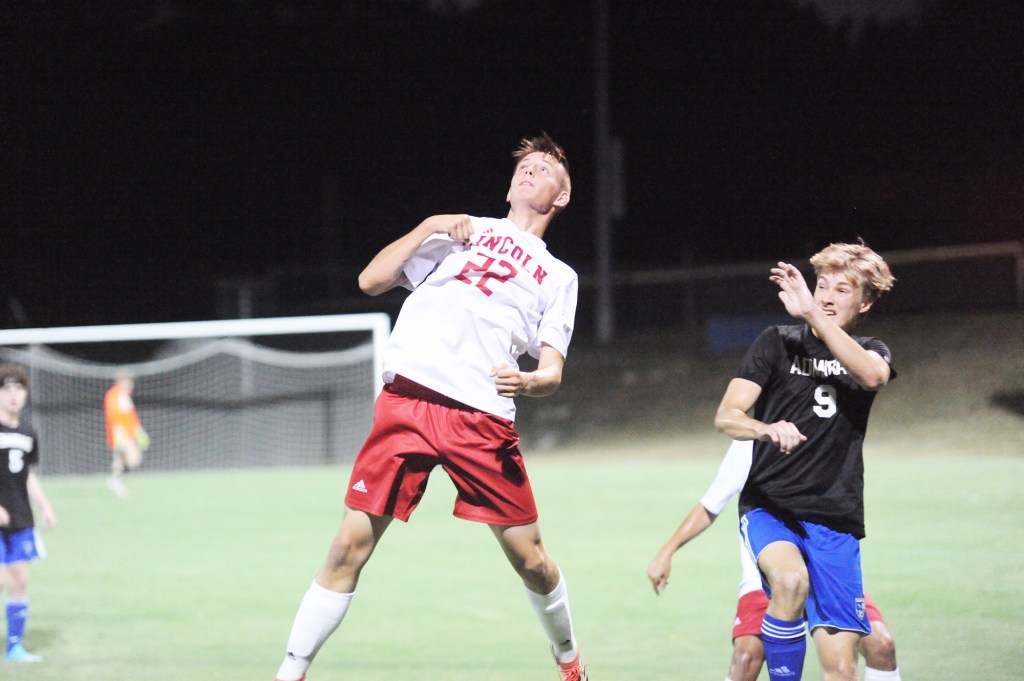 Austin Price of Lincoln County challenge Sam Lynch of Danville for a ball during the team's matchup earlier in the year. Danville is ranked 10 in boys soccer RPI while Lincoln is 37. (Photo Derek Brightwell)

The first official set of KHSAA Ratings Percentage Index (RPI) rankings have been released for all fall sports in the state.

“It has been an important period the last few weeks experimenting with output formats and screen layouts, while determining what documents were needed to ensure both transparency and replicability. We have continually stressed that as the only official results source, any other data outside of our website should be regarded with skepticism,” said KHSAA Commissioner Julian Tackett. “We are very thankful to our friends with the Colorado High School Athletic Association who have been invaluable in troubleshooting our implementation questions. From the beginning, our goal was to internalize this project and not outsource to third parties in order to avoid creating duplicate reporting for our schools and opportunities for confusion.”

The RPI will be uniquely important in the football season, as it will be incorporated in seeding rounds three through five of the state tournament. Also unique to football is different weight given to each of the six classes. 1A teams are given a lower game value than 6A teams.

In boys soccer, Daviess County sits atop the RPI leaderboard while Danville currently sits at 10. District rival Lincoln County is currently ranked 37 in the state.

Tates Creek is atop the girls soccer leaderboard while top District 45 seed Garrard County ranks in at 34. Mercer County is currently ranked 46.

1A Pikeville leads the way in football while Mercer County (nine overall) and Boyle County (11 overall) both rank second in their classifications.

In Volleyball, Mercer County is ranked 74, while Danville and Lincoln County — 142 and 145 respectively — are top in the 45th District. Elizabethtown is the top team in the state per RPI.

With the RPI being new, there is the possibility that some coaches and fans will debate the merit of it. This has already happened as the initial football ranking had three Class 1A teams in the top 10 and four in the top 12. Tackett does not believe the debate is necessarily a bad thing.

“While some coaches may argue about this piece or that piece, this poll or that poll, or whichever system would benefit them more than others, in the end, this project will result in people talking about high school sports which is always good. That discussion will lead to continual fine tuning to make the participation opportunities optimal for all involved,” he said. “It is our hope that by laying out all the calculations and being completely transparent with the results, we provide a good publicity tool for our sports, a means for districts in all team sports to potentially break ties in standings, and of course, address the idea to revise the bracketing in football to peak interest in championship play during the playoffs, which was the original request.”

The KHSAA plans to update the RPI on an hourly basis across all sports and will consider the final polls at the end of the season.