One Day: Parksville restaurant makes it a short trip from farm to table 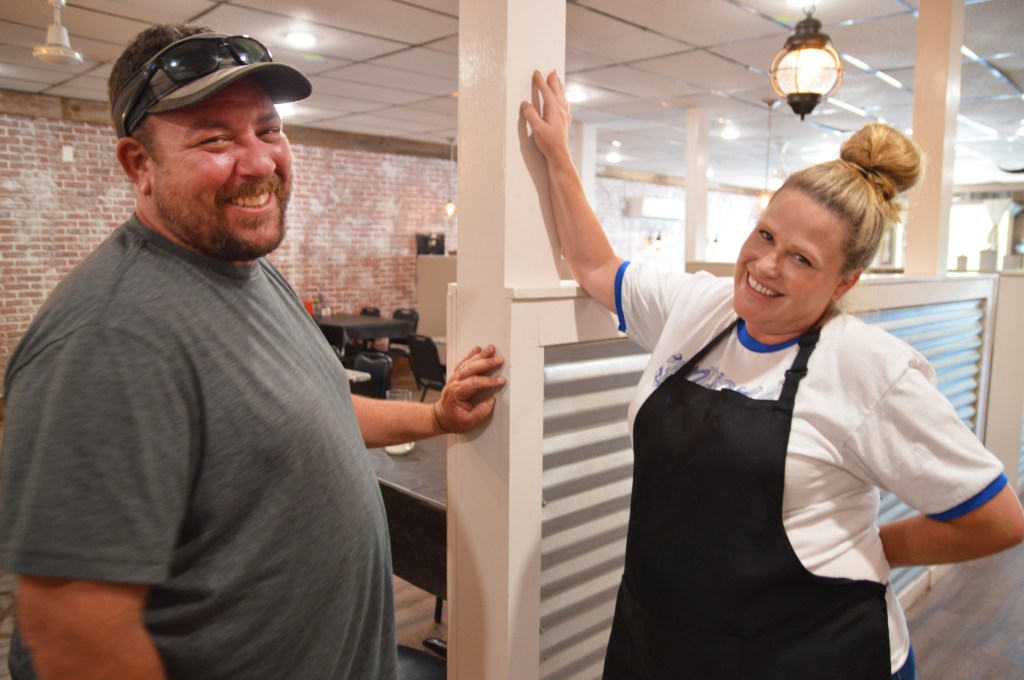 Beau and Nicole Cacciatore seem to find plenty of time to laugh together, even on the job at Farmhouse Restaurant, which they opened in May of this year. Nicole says Beau is "no longer allowed to come out and talk to customers," because he's usually hot and sweaty from the kitchen, and "comes across like a meanie." She says anyone who wants to talk to an owner needs to let her know when they're coming; "I'll talk their ear off. I love people."

When The Farmhouse Restaurant opened May 29 in Parksville, Beau and Nicole Cacciatore weren’t sure what they’d gotten themselves into at first. Beau was sharing renovation updates of the old Feathers Grocery on Alum Springs they bought and turned into a restaurant on social media, and before they knew it, posts were being shared everywhere.

“The day we opened, we had people tailgating in the parking lot,” Beau said Saturday afternoon, during some downtime at the restaurant. It was a lot of pressure and the first weeks weren’t easy. But, after a few tweaks — like no longer offering breakfast and sticking to lunch and dinner, with specials throughout the week like $5 burger day, all you can eat catfish and authentic Italian nights — they feel like they may have it close to a science now. 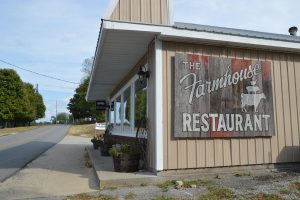 (Bobbie Curd photo) The Farmhouse Restaurant is located on Alum Springs Road in Parksville. It was the location of the old Feathers Grocery store.

They also run Twin Creek Farms, about 15 minutes down the road in Washington County, the black angus operation where all the restaurant’s beef comes from. They were up to about 200 mamma cows but have scaled back in order to focus more on Farmhouse.

Vegetables come from the farm, too, as well as other local producers. Nicole said next year, there will be a garden in the lot just behind the restaurant, where veggies will be grown.

The Twin Creek Steaks beef label targets the 1-percenters of the world, Beau said, who want $49 per pound prime filets. They began shipping beef all over the country and realized one of their surpluses is ground beef — so why not open a restaurant, they thought, to use the rest of their homegrown product.

“We like to know where our food is coming from … If people knew more about these packing houses and how things are done — when you go and buy ground beef (from a regular grocery), that one package is blended from hundreds of animals, and it’s all trimmings. You don’t know what’s what,” Beau said. “With ours 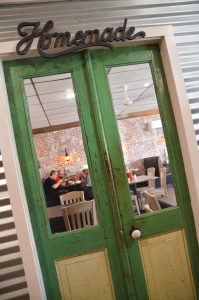 (Bobbie Curd photo) Leaving these green doors inside Farmhouse Restaurant was important because they are left over from the original Feathers Grocery from 1915.

, it’s one single animal at a time that’s never left our farm, humanely raised and treated, and antibiotic/steroid/hormone free, and we use a lot of noble cuts — the sirloin, the chuck, the short rib all gets blended in there.”

There are no “average days” in the restaurant biz, they say, especially when you’re running a farm operation at the same time. Usually their coffee is flowing by 6 a.m.

As soon as the sun cracks, Beau and Nicole are out in the fields, checking on all the cows who are about to have babies. Then they check on the rest of the cattle, feed them, drive the fenceline to make sure all’s well …

“There’s always an adventure … somebody who’s sick, somebody who’s limping, a baby needs help … that’s just the farm life part of it,” Beau says, which is one of the reasons he’s with Nicole.

They two met on farmersonly.com, because farming is a way of life, they say, and it was important to both of them to find someone who understands it. Before they scaled the farm back to about half its size, they would host guided hunting trips, where Nicole would cook for a group of hunters for up to three weeks while they stayed on the farm.

“I dated a few from ‘the city,’” said Beau, who’s from New York. “But it didn’t work. I needed someone who would enjoy taking rides across the farm at sundown, looking at deer and cattle. That’s her.”

Nicole was born and raised in Nicholasville and had always been on a farm; she also has three generations’ worth of restaurant experience in her family. She did most of the decor of the restaurant, and all of the recipes are hers — except for Italian Thursdays: Beau’s mother, Janet, is the chef behind the eggplant parmesan and meatballs with authentic, homemade sauces.

“It’s all generation recipes on Thursdays. Her parents are straight off the boat from Italy; so are my dad’s parents,” Beau said. 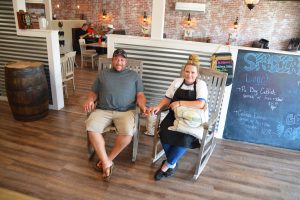 Beau had previously been a commercial fisherman-turned-captain, and moved into the private sector, running yachts and sport fishing boats for clients. The last mega yacht he captained was for a Kentucky client, which led him to finding the farm in Washington County.  “From the open seas to the open land,” Nicole said.

When they decided to open The Farmhouse, they’d first looked at some spaces in downtown Danville and in Springfield.

“I’d never heard of Parksville before we drove through here,” Beau said. Now, they both say they feel quite at home in the community with all of the support they’ve been given. “It’s a pretty neat community here. We love the people.”

The aim is for The Farmhouse to be a destination restaurant. Nicole said she plans on carrying locally made jams and jellies, honey and other items.

And she’s been so happy with customers who know the history of the old building. The Feathers family brought them in an old picture of what the grocery store used to look like, which they have framed up front. 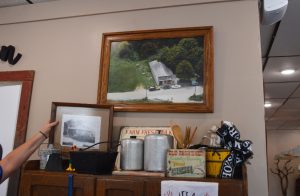 (Bobbie Curd photo) Old photographs are framed that the Cacciatores have been given by others showing the history of the building. The black and white in the corner was the original Feather Grocery, back in 1915.

“This was a happening place, Parksville, back in the day,” Nicole said. “The railroad came right through here, there was a mill, a depot and three different stores, in 1915, 1920s.”

Beau said because it used to be Feathers Grocery, he knows people who come there today to have a meal remember “getting a bag of seed there with their parents and a bologna sandwich. Now they can meet up with old friends here they don’t see anymore, because there’s nowhere else in Parksville to go.”

That’s what Nicole loves about it. “I talk to everyone who’s here. And I love that … Customers see people they know, and they just sit and talk, and that’s what we want.”

“What’s really nice is you don’t get good cell-phone service in here, so families actually talk to each other,” Beau said.

They hope to build onto the restaurant and add a brick pizza oven, but Beau says that’s not going to happen until the “playing field is leveled” and liquor sales become legal throughout Boyle County, instead of just in the cities. 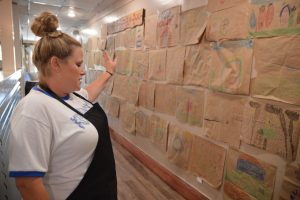 (Bobbie Curd photo) Nicole Cacciatore shows the hallway in The Farmhouse Restaurant that’s reserved for kids’ drawings to be posted.

But no one needs to worry if that does happen, he says. “This will always be a family restaurant. But people who want a glass of wine with their Italian, or a beer with their burger — they should be able to. We don’t want to be a late-night bar.”

The Farmhouse Restaurant is located at 6560 Alum Springs Road, and open Tuesday through Sunday. To keep up with their specials, like them on Facebook.