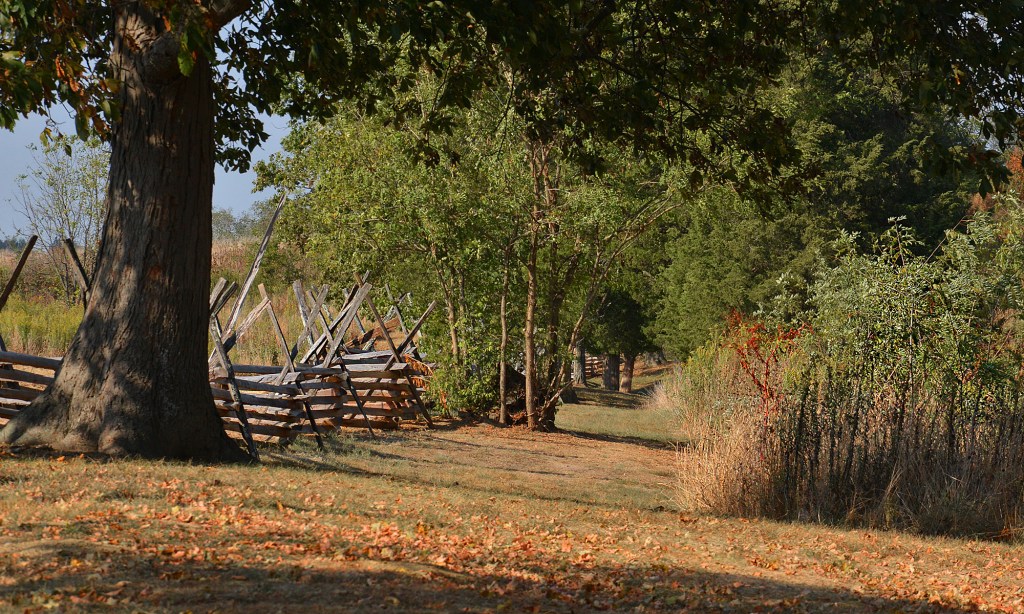 Photo by Robin Hart/robin.hart@amnews.com A path is kept mowed along a split rail fence at Perryville Battlefield State Park. On Monday, Kentucky State Parks officials deemed the park conditions were too dry to host the annual Battle of Perryville Commemoration this weekend.

There will be no sounds of cannons booming over the hills of Perryville Battlefield this weekend. And no soldiers will be camped out bringing Civil War history to life during the annual Battle of Perryville Commemoration, which had been scheduled for Oct. 5-6.

It’s the first time in nearly 50 years the commemoration will not feature cannons, black powder guns and living history camp sites due to those events being cancelled by the Kentucky Department of Parks because of abnormally dry weather conditions causing fire hazards. 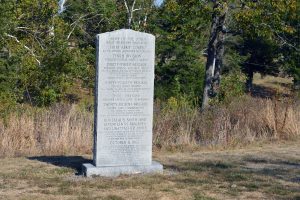 Photo by Robin Hart/robin.hart@amnews.com
A monument to the Army of the Ohio stand in an area surrounded by dry grasses at Perryville Battlefield State Park on Tuesday.

The only events to recognize the 157th anniversary of the Battle of Perryville at the battlefield will be a memorial service hosted by the Sons of the Confederate Veterans at noon on Saturday; and the Shadows of War ghost tours that will be held at 7, 7:30 and 8 p.m. on Saturday, for $20 per person.

All battlefield tours, living history areas, cannon demonstrations, performances of historic figures and the School of the Soldier have been canceled.

The park museum and grounds will remain open with regular admission prices. According to a news release from the KDP, “All camping, military demonstrations with cannons and other special programming have been cancelled for Saturday and Sunday. Boyle County, where the park is located, is among the more than 100 counties that have burn bans in effect.”

“We are disappointed to have to make these changes, but in the interest of the safety for our guests, neighbors and our staff, we did not have any other choice,” State Parks Commissioner Donnie Holland said.

Representatives of the Kentucky State Parks Department visited the site on Monday and determined the vast area presented too much of a potential fire hazard and decided to cancel the events, said Gil Lawson, a spokesperson for the department. Camp fires, cannons, guns, and all exploding devices, along with cars and the chance a lit cigarette could ignite a fire were of great concern.

The department “really appreciates” local fire departments and government officials’ offers of assistance with fire watches and water supplies, but it was too large of an area to protect in case a fire was accidentally set, Lawson said. He said the community supports the annual commemoration, “But we can’t ignore the conditions at the park.”

Friends of Perryville Battlefield to have separate event

At the H.P. Bottom House, located on Hays Mays Road, from 10 a.m. until 3 p.m., many Civil War reenactors will be in costume and camped out on the property. They’ll talk with visitors about the war and how the house was used during the battle, said Perryville Battlefield State Historic Site’s former executive director, Joni House. And they will give military demonstrations.

“This is not a reenactment. Please don’t come thinking there will be any guns shooting,” House said.

She will also be giving tours of the house and explaining the importance of the history of the battle at Perryville, which occurred on Oct. 8, 1862.

At 7 p.m., Bluegrass music by Storefront Congregation will performed on the front porch of the H.P. Bottom House. Visitors are asked to bring picnics, blankets and chairs. Musicians are also invited to bring their instruments to join in, House said.

“It’s a good, old-fashioned country picnic,” she said, and will last “until we quit playing music.”

House said she disagrees with the state’s decision to cancel the Battle of Perryville Commemoration at the park this year. She said re-enactors who had signed up for the annual event had agreed to have “cold camps” where no fires would be used and no guns would be fired.

House said because The Friends of Perryville Battlefield had already planned on burning about 300 acres of natural habitat area once rain moved back into the area, fire breaks were already in place, which would have protected the park.

“This is just being driven by money,” House said. “The Parks Department doesn’t want to spend money on port-a-potties.”

House said she believes the decision was “driven by profit margin.”

“The elected officials need to know it is more important than just profit margins,” she said.

House said the KDP wants to use “money-making gimmicks. That disturbs me greatly.”