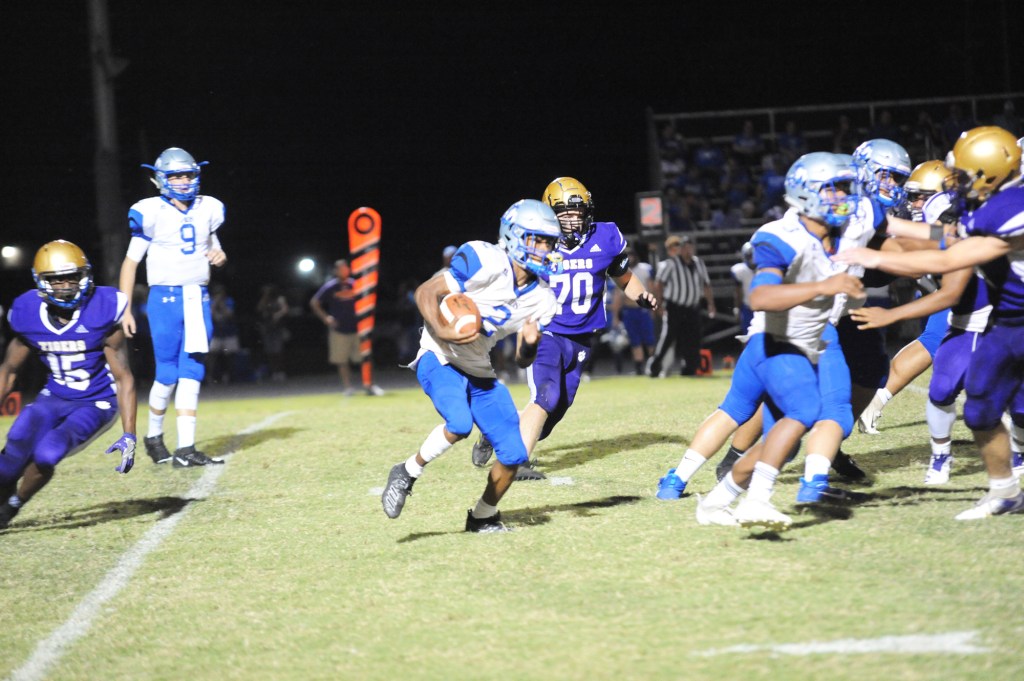 To say it hasn’t been the year that Danville head coach Clay Clevenger was hoping for entering the season would be an understatement. After opening the season with a decisive win in the Bob Allen Pigskin Classic against John Hardin, the Admirals have dropped their last four contests.

A barrage of injuries and circumstances have made 2019 a “strange” year for the Ads. With last week’s game at Wayne County being canceled after only one quarter, Clevenger is hoping his team can enter this week’s game against Allen County-Scottsville refocused and ready.

“We’re sitting back and waiting on things to happen and a lot of times when you do that, bad things happen,” Clevenger said. “We’ve got to go out and be the aggressor in this game and make plays and make things happen. We’ve lost our confidence and we haven’t been doing that as much. And I’d like to see us get back to that mentality.”

The Admirals will be wearing purple jerseys to honor Bate Middle School. Clevenger hopes that it will inspire and invigorate his young team.

“Hopefully we can come out with some energy. I think when we’ve worn the purple jerseys and honored Bate, it’s brought a lot of energy to our guys when we’ve done it and I hope it does with these guys too,” he said.

While the Ads had a pseudo off-week last week with the early cancelation, they are still plagued with injuries. Clevenger does believe that the normal fatigue of a game of football can bring on a team, there are still bigger injuries affecting his team.

“It didn’t help the bones heal any faster. So we’ve still got guys in casts or who out because of broken bones.”

Allen County-Scottsville is making its second trip to Danville this season — the Patriots played Mercer County in the Rebel Bowl earlier this year — but will be playing Danville High School for the first time in school history.

This year’s iteration of the Patriots are a run heavy team, but that doesn’t mean that they are a predictable team.

“They do a little bit of everything,” Clevenger said about the numerous formations ACS uses. “The shotgun one back, some zone read, a two back under center, some veer sets and then they can get under center with some wishbone sets. They’ve done them all quite a few times. They’ve all had significant plays in those formations. Obviously we need to be prepared for all of those.” 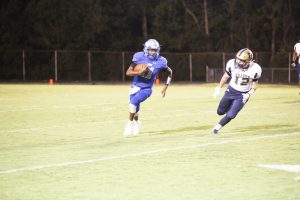 Sage Dawson running out of the pocket against Hazard. (Photo Mike Marsee)

One wrinkle that Danville’s defense will see that will be new for them this year is the I-formation option run.

“The I-Option is something that we haven’t seen to this point,” Clevenger said. “I’m sure they’ve seen our Hazard film and I expect to see some three back power football early and see how we handle that. If we’re able to slow that down, I’d say their next step would be the I-Option.”

That option running attack has produced a balanced running attack that has three running backs over 200 yards this season and four runners with over 30 carries.

Defensively, Clevenger expects the Patriots to be blitz heavy. This won’t be the first opponent to send multiple rushers at Danville’s young QB, but ACS uses the blitz in a different way than others.

“They like to bring a fifth linebacker and sometimes a sixth linebacker quite a bit. A lot of times it’s seems they’re blitzing teams they feel they might have a little bit of a disadvantage athletically,” Clevenger said. I think it’ll be important for us to expect that to happen and handle the blitz and make plays off of that.”

Looking ahead, the Admirals will enter district play with a game at Somerset. While obviously every week’s goal is to win the game at hand, a win this week can give Danville momentum before heading into its district schedule. 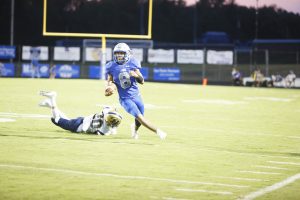 “Obviously, this season has been kind of strange. From last week the game being canceled and the injuries and misfortune we’ve had,” Clevenger said. It’ll be good for the kids’ sake. They’re working hard and doing what we ask them to do. I’d love to see them be able to come back and get that taste back.”