2020 Census Quilt on display at the library 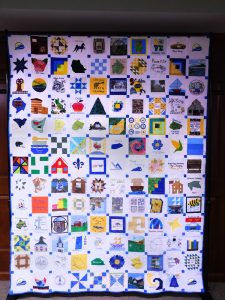 The 2020 Census Quilt has arrived in Danville. In the spring of 2019, the Kentucky Extension Homemakers Association (KEHA) was asked to consider a special project. Representatives from the Census Bureau inquired to see if KEHA would take on the task of creating a quilt including a square from each of Kentucky 120 counties for use in promoting the 2020 Census. The challenge was accepted, and the project was initiated in May.

The completed quilt made its debut through a special display at the National Quilt Museum in Paducah in mid-September. It will now journey across the state where it will be exhibited in every county. The Boyle County Public Library is the first stop on the Census Quilt tour. The 2020 Census Quilt will be on display at library from October 1-13. It will also make an appearance at the farmer’s market in downtown Danville on Saturday, October 12 before it moves to the next stop on the tour.

The Boyle County Public Library serves the city of Danville and the surrounding communities, and is actively committed to enriching the lives of its patrons. The library is located at 307 West Broadway in Danville, KY.