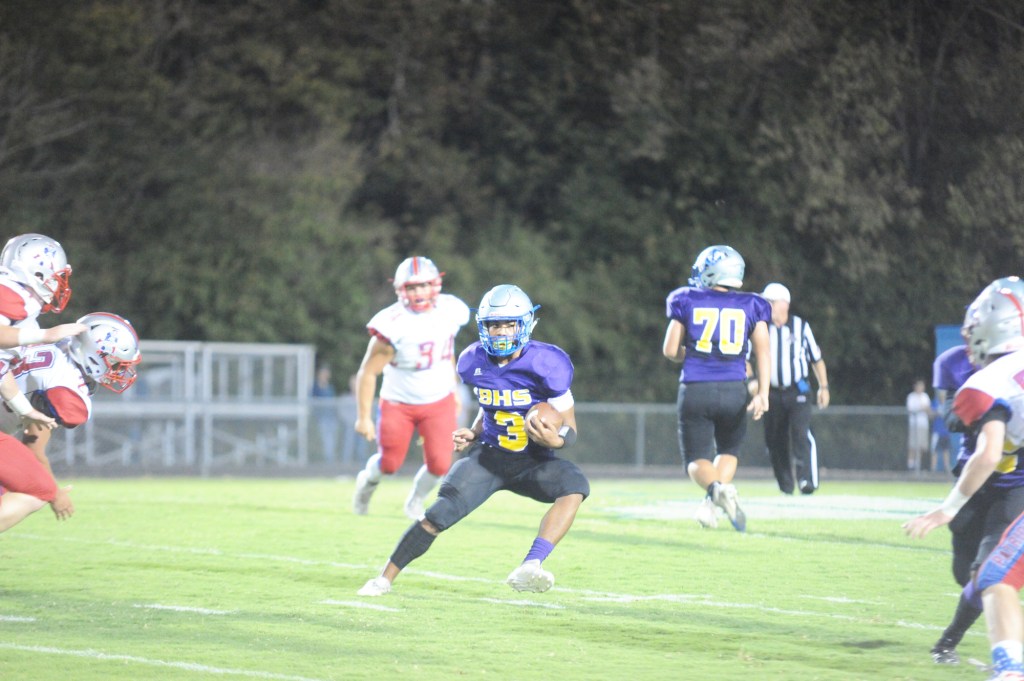 Caleb Burns had a monster game with 151 yards rushing and two TDs to go along with an 85 yard kick off return for a score. (Photo Derek Brightwell)

The losing streak is over as Danville triumphed over Allen County-Scottsville in a big way, winning 41-13 to improve to 2-4 on the season. The Ads came out in the purple and gold combination as a way to honor Bate High School, and had the Kentucky State University band providing the soundtrack for the night.

“To see them be able to get rewarded and play like this in front of the home crowd. It was a great atmosphere obviously with the K. State band here. It was a fun night.”

Earlier in the week, Clevenger said that he wanted his team to come out with a lot of energy, and expected them to on Bate Night. And his team did not disappoint. 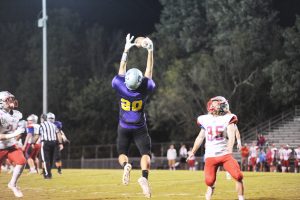 “Well if you can’t get pumped up to play with those guys (the Kentucky State band) in the stands playing — and the Bate NIght it’s kind of a special night for our program and a lot of our kids,” Clevenger said. “This is the third time we’ve done it and every time we’ve worn that purple and gold, I feel like we’ve come out with a lot of energy. It’s one of those special nights and I think these kids fly around.”

Keelan Story recovered a pooch kick from Sam Lynch that fell in a hole in the ACS return team to set the Admirals up with the ball at midfield to start the game. It only took five plays to cash it in in the form of a Caleb Burns touchdown and give the Ads a 7-0 lead.

“I thought it was big. It seemed like — we’ve lost a couple of those where in the first series or first kick off we’ve given up that kind of play,” Clevenger said about the kick recovery. “We really weren’t trying to get the coverage back, we were just trying to put the ball right there. It just found some grass and took a good bounce for us and Keelan got on it.”

That lead would last the entire first quarter until the Patriots connected on a short pass that turned into a long gain and Landon Wilcher ran it in from five yards out to tie the game.

That tie would last a significantly shorter amount of time as Caleb Burns took the kickoff 85 yards to the house for his second score of the game and what would become the game winning score. That would be the score at the half.

“That was a big play. They’d just tied it up 7-7 and those are those lapses that we’ve been in. It seems like we kind of let our heads drop a little bit when a team scores,” Clevenger said about the kick return. “So to come back and respond that way I thought was really big and got us our juice back.”

Going into the game, Clevenger expected to see a lot of different looks from the Patriot offense, mostly variations of the running game. While the Allen County game plan was still skewed in favor of the run, they did throw the ball a bit more than was probably expected. Danville has struggled to stop the pass this year, but handled it pretty well tonight, save for the 47 yard play that set up the TD run.

“We’ve struggled a little bit with the pass this year and it’s something we need to work on,” he said. “We had a new guy out in the secondary tonight because of injuries. But I thought for the most part, defensively we played well. We flew around a lot to the football. We tackled better — I thought — in the second half tonight as well.”

“It was hard, because they come out with different schemes of offense and run a lot of formations. They came out with something that we haven’t seen before which is that option,” senior linebacker Darrian Bell said about the Patriot offense. So it was a lot about getting the right call and getting everyone in the right place. So I think with them paying attention in practice and listening, they really are retaining that information. They just want to go out and make tackles and make plays.

“At first, even me — I got my nose dirty in the diving and that’s not my job,” he added about defending the option. “After I started doing my job and playing with the game it gets easier. You just have to know what you’ve got to do and do your job and everything else will fall in place.”

The second half belonged to the Admirals. Just under three minutes into the half, Sage Dawson connected with Bell for a 47 yard TD. Bell had two catches on the game, both of them big games as he ended with 74 yards receiving on the night.

Just over five minutes of game time later, Caleb Burns took over the drive. The Admirals ran six plays for 59 yards and a touchdown, all of them were Caleb Burns runs. As he crossed the goal line for his second touchdown of the game, he looked more relieved than excited. Burns had a monster game, toting the rock 21 times for 151 yards and the two scores to go along with his return touchdown.

“Caleb is capable of that,” Clevenger said. “He kind of has some lapses and that where he doesn’t play with the intensity that he needs to, but when he does he’s very talented. And there’s no doubt about that. I think he came out and brought it all out tonight.”

After Dante Hayden’s interception gave Danville the ball back, Dawson connected with a wide open Corydon Crawford streaking down the middle of the field for his second TD pass of the night. Dawson would end the game completing half of his 10 pass attempts for 154 yards and two touchdowns. Crawford only had one other catch in the game that went for two yards for a final stat line of 62 yards and a score. 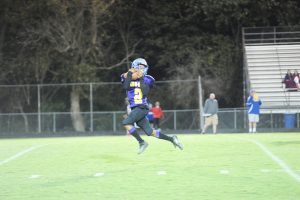 Sophomore Brady Morse entered the game in the fourth quarter and connected with Bryson Young for an 18 yard score over three defenders. Young’s only catch of the game — and Morse’s only completion — was an impressive one as he jumped and turned his body to just barely haul in the score while falling to the grass.

Allen County would add a score late, but it didn’t matter. With the ball and time running out, the Admirals simply milked the clock until they could get into victory formation.

The win is a big one for the Admirals as next week they travel to Somerset to open up district play. With a win over Hazard Friday night, the Briar Jumpers sit at 6-0 on the year and are averaging just under 48 points a game. Clevenger wanted to get his team momentum heading into that game, and with a big win, they did just that.

“I think it’s great. We came out here and played. I think it’s good going into district with it because we’ll come out with more confidence,” Bell said. “We’re back with it, the losing streak is done with. So we can go and play and get back to it and can play and can win.”