Ethan James flashes brilliance up top, and in net 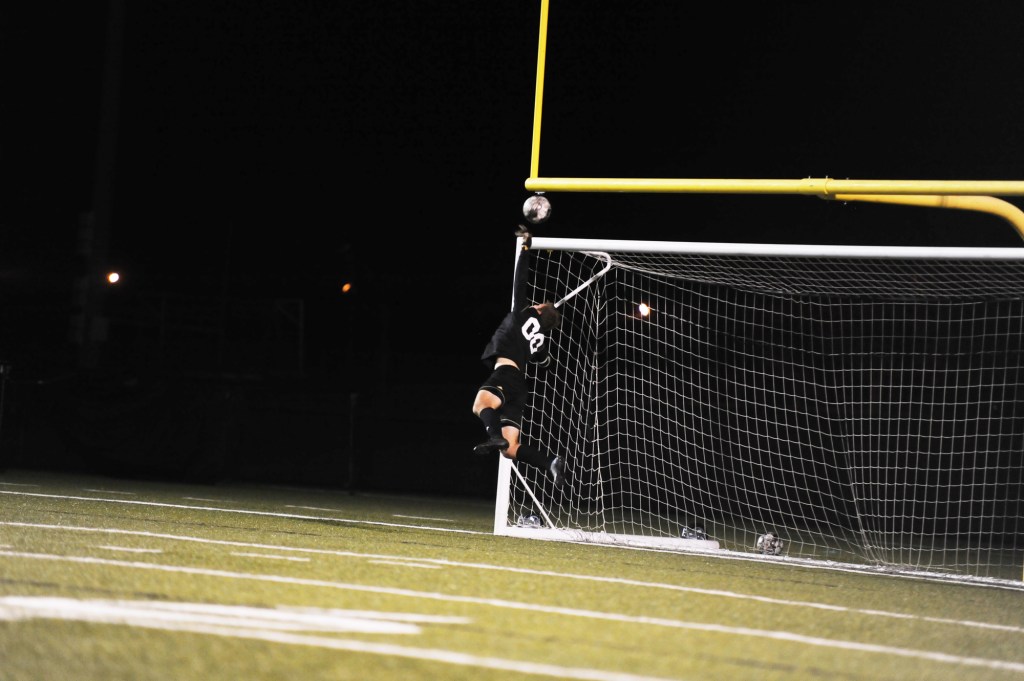 James makes an acrobatic save to prevent a goal against George Rogers Clark. (Photo Derek Brightwell)

As Boyle County set up for a free kick to tie the game with nine seconds left against George Rogers Clark, goalkeeper Ethan James took off on a full sprint, frantically waving his arms to bring the entire defense up to join the attack.

It may be an unusual scene to some, but for those who’d watched the Boyle County soccer team all year, it was just the logical play. And while the kick may have been deflected away, ending the Rebels senior night with a 2-1 loss, the competitive streak displayed by the keeper didn’t go away.

“He’s competitive. He ups the level of intensity during practice,” Boyle coach Cris McMann said about the senior. “But he’s supportive and nice to the younger guys. He’s a good captain.”

James’ leadership was tested early in the year. After missing the first two games of the season serving a suspension for a red card from last year, James took a kick to the shoulder in the sixth match of the year — against Woodford County — in a contest the Rebels were already shorthanded in. James played the rest of the first half in obvious agony, and had to come out in the second, after the game was out of hand.

He wanted to be in goal in the next game, but the trainer decided it was best to rest the shoulder, and so James got on the field anyway — on the offensive side — and scored four goals.

“That raises some questions. He might be healthy enough to play in goal, but that might not be where I put him,” McMann said after that game.

For the next two games after that, James was the striker and in those three games, James scored seven goals and got two assists. For James — who has played goalie since he was four years old — it wasn’t that much of a surprise.

“I was pretty confident. I know where I don’t want strikers to be from playing goalie for so long, so I just knew where to be,” he said. “None of my shots were from outside the box. They were all just little passes to the back of the net.”

“He’s a good athlete and he’s aggressive. I knew that he would make things happen up there. I wasn’t really super surprised,” McMann added. We let him play in the field during practice and he scores lots of goals.”

That gave the Rebels an interesting problem — what to do when your best goalkeeper might also be your best offensive threat?

“We really needed him in goal so we had to fiddle with our lineup a little bit to figure out who we could bring up top that could score,” McMann said about the situation. We changed our whole system of play to get him back in goal and for us to score some goals.” 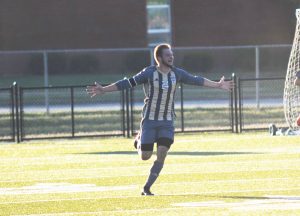 James celebrates what he thought was a goal against Danville. (Photo Derek Brightwell)

For James’ part, he welcomed the switch fully, even if he wasn’t told about it until the last minute.

Before the Danville game — the second in James’ stretch playing up top — he showed up in his keeper gear, under the assumption that he’d be in net. Danville would go onto win that game 5-0 with the lone goal the Rebels scored — by James off of a corner kick — being called off because of a controversial offsides call. James, looking ahead to this week’s district tournament, believes that being in net if they meet again will make the difference.

While the offensive Ethan James experiment could be deemed a success — the Rebels went 2-1 during the stretch — having James in net makes Boyle a better team, McMann believes.

“He’s just an even better goalie,” he said. “I think he gives everybody a lot more confidence. We play with a back three instead of a back four like most teams do because we’re pretty sure he can make some saves for us. That allows us to have more attackers involved. As a coach, it’s a great feeling having him back there.”

In the net is also where James wants to be — and where he’ll be at the next level as well. As a very vocal player — you can hear his voice carry no matter where you are in the stadium — controlling the defense from the net is a natural fit for James.

James — who played shortstop in baseball — says that, while he’s been coached a lot on technique as a keeper, once the game starts, reaction and instinct can make the difference. And he’s got both of those in abundance.

“It’s just been with me forever, I guess. There’s a lot of coaching that goes into goalkeeping — there’s so much technique,” he said. “But in a game, technique can kind of go to nothing and you have to do what you have to do to make the save. I can throw my body out there and get hit in the face and make the save. It’s just however you get the ball.”

James — who has 58 saves and two shutouts despite not playing every game in the net this year — says the being the leader, being the captain, and being the last line of defense is what’s most important to him about playing keeper.