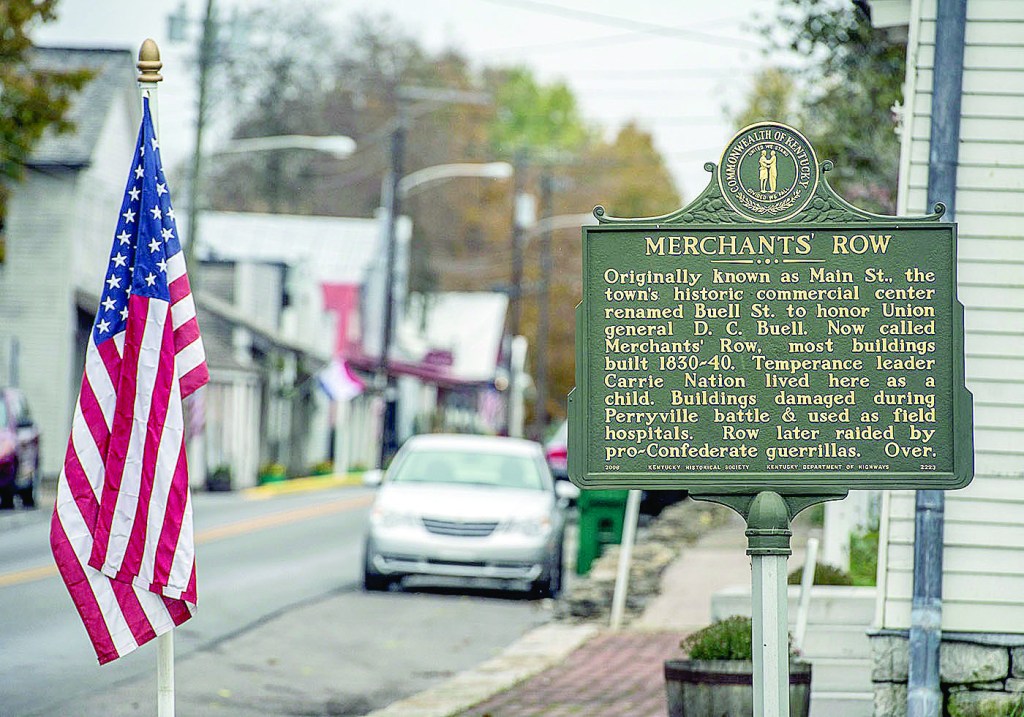 (File photo) Merchants Row in Perryville may be up for sale soon, depending on what the city council decides to do.

The City of Perryville is looking into the possibility of selling historic buildings it owns on Merchants Row before they deteriorate any further, in hopes that private buyers could afford to do the necessary renovations.

Mayor Brian Caldwell said the council should consider a plan of action for the buildings while they are still viable and would be of interest to potential investors.

“A lot of them, just honestly, are not in good shape. I don’t know that we as a city should be in the property management business,” Caldwell told the council during its regular meeting Thursday night.

“I don’t think there’s any feasible way there’s ever going to be enough money made by us to do what properly needs to be done, to do the buildings justice,” Caldwell said.

The council discussed how the Main Street Perryville organization could use its resources to better promote the city and community events instead of trying to scrape money together for building repairs for the city.

Council person Kelly Gray said, “A building that is owned privately … is going to be kept up, maintained and preserved far better than what we can. It’s just like what we’re doing this weekend (Perryville’s commemoration of the Battle of Perryville). We’re raising money to try and fix Dr. Polk’s House and office.” If it was in the hands of a private owner it probably would have already been renovated, she said.

“I think that instead of raising funds to fix buildings, we should be focusing on doing things and promoting community involvement and interaction…”

Long time Perryville resident and community supporter, Fred Edwards told the council he’s seen first hand how the historic buildings are deteriorating before their eyes. “They’re getting ready to fall down. When you look at the city budget and Main Street (Perryville organization) there’s no way humanly possible you’re ever going to come up with the money to rehab those buildings.”

Edwards added, “So you either have to come up with a good solid business plan of how you’re going to raise several hundreds of thousands of dollars, or you’re going to have to sell them. That’s the only two options you have.”

“What Main Street (Perryville) is doing … you’re putting a BandAid on a hemorrhage. Going out here having an event making $5,000 and putting up some shingles and some plat board and then the others’ foundations and everything is falling down. The Karrick House is getting in terrible condition. … What I’m afraid is you’re going to let them continue with the same old same old and let them get into such disrepair that then you’re not going to attract a buyer … at any price.”

Edwards said he also volunteers at the Perryville Battlefield State Park which hosts 60,000 visitors from around the country and the world, and is frequently asked by visitors where in downtown Perryville they can see more historically significant structures and get something to eat.

He said he was all for the city putting the buildings into private ownership. “Those are the people who will invest their money, then will put in businesses to attract the out-of-towners.”

Kelly Gray said “Easement is the challenge” when finding buyers for properties that have solid restrictions in place due to being located in a historic district listed on the National Register of Historic Places.

Kelly Gray said she belived there are many investors who are passionate about historic preservation are “not afraid to do what needs to be done” because the structures are “the real deal.”

Council member Adam Gray said easements are designed to keep the property value high, “but it decreases your property value when you go to sell it because they (buyers) don’t want to abide by all the rules.”

Kelly Gray asked if the easements could be removed or loosened.

Council member Chad Blackwell is a Merchants Row business owner and voiced concern about the possibility of an investor buying the building where he’s located and moving him out. Other council members said that could happen, but he could buy the building if it was for sale.

“The vision for Merchants Row is exactly … what you’re doing,” Kelly Gray said to Blackwell. “You’re a rarity when it comes to a renter. Most renters don’t want to put that kind of time and energy into a building they don’t own.”

Another business owner who rents a Merchants Row building, “I personally don’t want to put money into it (the building) because it’s not mine. If it were ours, that’s a whole other ballgame.” She said she didn’t want an investor to throw her out. “But if we bought it I would guarantee it would be fixed up. Not only would it look better, it would save us money in the long run with utilities.”

Adam Gray said if the city council does decide to sell the buildings on Merchants Row, he didn’t believe “a typical developer” would bulldoze them down and build a McDonald’s.

“There’s no money here, except it’s old. … That wouldn’t happen in Perryville.”