World Space Week focused on the Moon this year

A lot of people don’t know what World Space Week is. Chris Myers, a science teacher at Danville High School, when asked if he knew what world space week was, said, “No.” And when asked what he thought the importance of space exploration was he said, “Space exploration is very important because so much technology has been invented for space exploration.”

World Space Week is an annual event that takes place in October. World Space Week is officially defined as “an international celebration of science and technology, and their contribution to the betterment of society.” In 1999, the United Nations General Assembly declared that each year, from Oct. 4 through 10, World Space Week will be held to commemorate two events.

On Oct. 4, we remember the launch of the world’s first man-made satellite, Sputnik 1, which opened the way for space exploration, and on Oct. 10, we remember the signing of the Treaty on Principles Governing the Activities of States in the Exploration and Peaceful Uses of Outer Space.

Each year, the World Space Week Association Board of Directors selects a theme to highlight an aspect of space travel. This theme provides guidance to World Space Week participants on the content of the programs offered that year.

Last year’s theme was “Space unites the world.” This year’s theme is “The Moon: Gateway to the Stars,” Because next year will be the 50th anniversary of mankind’s first footprints on the Moon.

The closest World Space Week event to Danville is in Lexington, and it will be held at the The Living Arts & Science Center. If you have any questions about this event, email bluegrass.scientist@gmail.com.

Have you ever thought of the actual purpose of standardized testing? Standardized tests are nation-wide tests that are based on the scores of students to see where each school is ranked. Most students think that they are boring and they don’t help them out in any way. Joseph Lay, 17, made a statement that, “it is really boring because some tests are given too early when students are barely awake.”

Hannah Glaze, 17, stated, “I have test anxiety and it makes me feel like I could do better if I wasn’t pressured when testing.”

Students also feel that if they fail, they will feel bad about the scores. Mckenzie Gatica, 14, a freshman student at DHS, said, “Once a test is over, we never think about the stuff in the test. We think about how it’s going to affect our grade because we don’t want to get out of school full of knowledge, we just want to pass.”

Students are focused on if they will pass or not. This causes their stress to increase by the fact that their scores also affect the overall score of the school. Around 35.7% of students say that on a scale from one to 10, they rate their stress a five, meaning they are affected by the stress caused from any standardized test.

In fact, students have had these thoughts since they first started school because most had to begin standardized testing in elementary. Is it a young age to begin standardized testing? Well, most students don’t agree because they say that “it will cause them more stress once they grow older.” Others say that “it’s better to start at a young age if they are going to do it most of their school life.”

According to the form that was collected, most students at DHS really didn’t even know the real meaning behind standardized testing. Some said that they are to “test our knowledge and our patience” and some even say to “make us bored to death.”

This honestly isn’t a bad idea. Most students would do much better if they weren’t put under the stress of failing. Sometimes even the school system fails on them because they haven’t learned the subject thoroughly. It is important to make sure each student gets the same amount of attention when learning.

One chance to catch unique play at Gravely Hall

Text and photos by HUNTER BUNTAIN 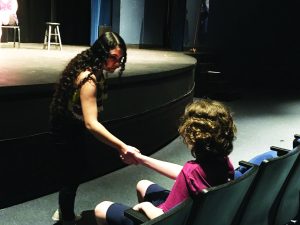 “Too Much Light Makes the Baby Go Blind” is a special compilation of plays only being performed Oct. 15th at 7 p.m. in Danville High School’s own Gravely Hall and Oct. 18 at the Kentucky Thespian Festival in Owensboro.

The play will feature cast members from both Danville High School and Boyle County High School, according to Jane Dewey, the arts director for the Danville school district. The play will be unique each time it is performed, so don’t miss the chance to catch this once-in-a-lifetime experience.