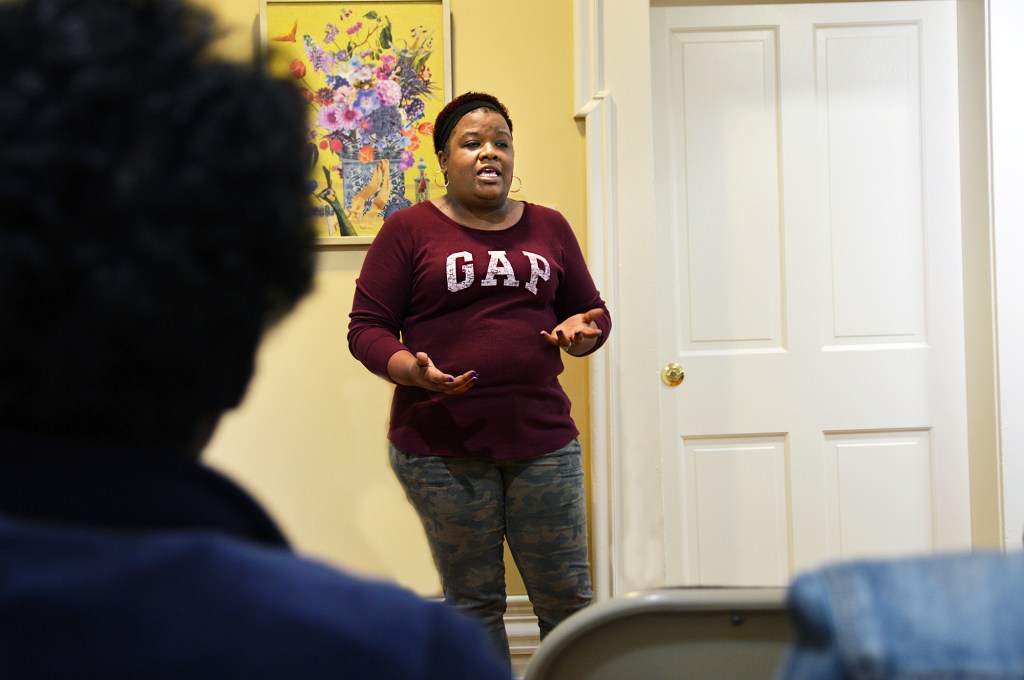 More than 30 people gathered at the Boyle County Public Library Monday night to talk about the potential for cultural change in Danville’s and Boyle County’s governments. The meeting was organized by a recently formed advocacy group.

Led by Cheryl Burton, those in attendance were invited to fill out forms listing their concerns with city and county government if they were uncomfortable being named. But many did speak up, some without giving their names, about the recent incidents they describe as sexist and discriminatory actions by Boyle County Magistrate Phil Sammons and Danville Mayor Mike Perros.

“We just know that our city and county governments need serious looking into,” Burton said during a phone interview before the meeting. She said that not only as an African American, but as a woman in Danville, “I’m not very satisfied.”

Burton’s aim is to gather up issues and questions and “categorize them and find someone at city hall or with the county who can help us get these issues resolved for people.”

She said after the Jennifer Kirchner incident — where a joke between Perros and Sammons got out of hand during a fiscal court meeting, resulting in a sexist comment about tourism director Kirchner’s body — “My wheels started turning. Then Joyce’s story came out, and I was like ‘no.’”

Joyce Collins, who had been an administrative assistant to the mayor’s office for 11 years, filed a grievance this year against Perros for making comments to her and new employees about her appearance and ethnicity.

The incidents have resulted in multiple apologies from both officials. And the grievance filed against Perros caused Danville to plan diversity training, which county officials now plan to attend as well. Collins requested her apology from the mayor be offered publicly during a city commission meeting, but the city said that wouldn’t happen because Perros was not acting in his official capacity as mayor when the comments were made. That event happened prior to the fiscal court incident with Kirchner, for which Perros did offer public apologies for, as mayor.

Burton said she first reached out to the NAACP’s office in Louisville, which referred her back to the local chapter, “but it’s not very active here. As a black person, I don’t have anyone I can go to for help. I want to help us figure out who that is.”

Monday evening, Burton told those gathered the issues with the city and county are frustrating. “But I’m only one voice,” she said.

“And we want our city to be diverse,” she said. “We want our courthouse to be diverse. When we walk in to pay our taxes at the courthouse, we want to see people who look like us … So it’s important to get some conversations started.”

One woman said it’s sad because “there’s a lot of not just talented, but educated minorities in this community …”

Burton said she’s talked to people who’ve left the community and gone off to college. “I’ve asked them why they don’t come back to Danville (to work). They say they’re not going to be given that opportunity; we don’t have any leadership that’s going to help them. We have no diversity in city hall. We need more African Americans to stand up, to come together and not be divided.”

A woman who spoke up said she thought the meeting was being held to discuss the concerns with the mayor “going forward, and how it’s going to be handled.”

Burton said it is one of the goals. “That’s one of our questions. What are the repercussions with the county and city (officials)? What if this happens again? Can he keep on making jokes of women? We’re going to work on that.”

Many said they feel strongly that Perros and Sammons need to resign.

“Since I’ve taken this on, there’s a lot of issues that a lot of people don’t know about, that goes on at city hall and with the county,” Burton said.

Some workers wanted to come to the meeting but felt like they couldn’t, she said. “… they’re afraid of retaliation. It should not be that way.”

One woman said, “The City of Danville has turned me into a black militant woman.”

Burton understood; she said she’s made that point before, as well. “If we try to do anything, we’re labeled that.”

A man who identified himself as someone who’s known Perros for the last 40 years said he thinks the mayor has tried to do some positive things for the community. “But I’m not here to defend him; I’m the one who asked him to resign … after we had a long phone conversation after the story about Joyce broke, I told him, ‘You need to step down, because the signal that you’re sending is like what’s going on over on Pennsylvania Avenue. It’s not OK.’”

He said it’s not OK to make those remarks, even jokingly. “Twenty years ago, it wasn’t right — but today, you get attention. Now all this attention is on the City of Firsts because of something that was very negative. Now it’s a black and white issue about a black woman, the mayor who made inappropriate comments and everybody knows about it. The right thing would’ve been to step down … stand up and say I made some very bad comments and I’m going to fix this and step down.”

He and others commented that they felt the issue wasn’t correctly handled by commissioners, either, and that the body as a whole should’ve have taken a stand.

She said she watched the video of the last city commission meeting, when Perros offered another public apology regarding the Kirchner incident, and felt like the only person who really spoke up was Commissioner Kevin Caudill. Caudill expressed how he felt the situation was inappropriate.

“Everyone else was like, ‘OK, let’s move on.’ Even (Commissioner Denise) Terry,” Burton said, referring to Terry’s comment that it should be remembered that elected officials are human. Burton said, “As a female? I would’ve given him an ass-chewing. I don’t go to the meetings, but I’m going to start.”

Ben Nelson identified himself as the person who wrote “the email” to the city and county after the first incident, asking for formal censure or the resignation of Sammons. He said his email was never acknowledged. “I guarantee you, as an HR guy, that in most organizations, that kind of unprofessional behavior would have consequences.”

One woman said it’s because in Danville, “It’s all about who you are” that determines the consequences to your actions, and many agreed.

Nelson said since learning of the mayor’s “treatment of Joyce, I’m like OMG … and you have not seen either the City of Danville or the county step up.”

He said the city’s position that Perros was not acting as mayor when he made his comments to Collins “is crazy.”

And that position “gets even crazier when he was standing in Joyce’s office” when he made the comments, Nelson said.

Kirchner was also present. She’s the director of the Convention and Visitors Bureau, and said the board sent a letter on her behalf to the fiscal court expressing how there needed to be some disciplinary actions with Magistrate Sammons. “And we left it to them to contact us to help us with the process, and we haven’t heard a thing. We’re going to continue down a path to find out what the process is with the county, but it hasn’t been very easy to figure out.”

Kirchner said having meetings is great, but asked, “What are the things we can carry with us each day” to make these cultural changes? Even though it was under negative circumstances, she said it was nice to see so many different groups coming together to discuss the issue.

“There isn’t a lot of diversity in our elected officials right now. That’s an issue, to represent the people who live here,” she said. “That doesn’t happen overnight; how do we support candidates and cultivate leaders? I look forward to continuing those types of conversations, and talking about the tough stuff.”
Burton said this will not be the last meeting, and she doesn’t want it to be a “black or white thing. It’s about the community — it’s a people thing. It offends everybody in our community; everybody.”

A woman who has relocated to the area from D.C. said, “I’m sorry, but this is more than a people issue. It is a racial issue. It is a female issue … It’s not easy and it’s not going to be pretty and there needs to be a sacrifice … I’m not prepared to make it easy for no one because no one makes it easy for us. This sweeping things under the rug …We need to be very present and very vocal, and not just in church.”

She said she wanted Collins and Kirchner to know they weren’t alone, and that it’s important for the community to rally around them, “and let them know they’re not in this fight by themselves. I’m prepared. And I know other people are too.”

Burton says anyone who has issues or concerns with city and county government, or who wants to be part of the group to help enact change, may email her at Cheryl.burton17@icloud.com. The group will be doing research on county and city hiring practices, among other local probes, she said.