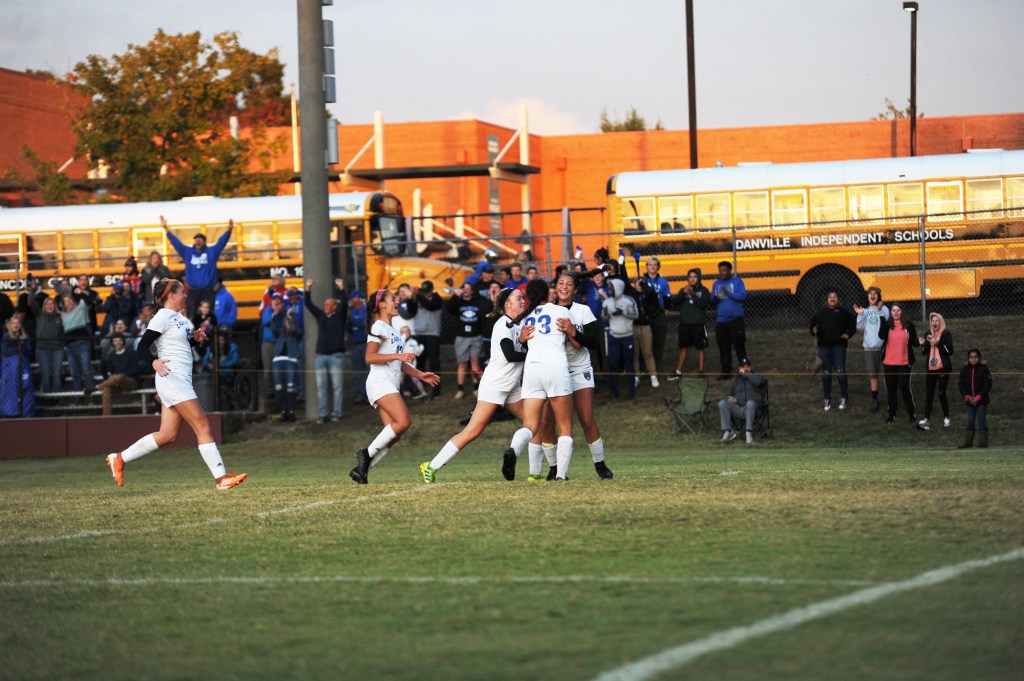 Karoyln Valko swarmed by her teammates after making the PK that would become the game winner. (Photo Derek Brightwell)

For the first time since 2006, somebody other than Boyle County will win the Lady Rebels’ district. In a run spanning two districts and 13 years, BCHS had been dominant on the pitch. That run ended Monday night when Danville exacted revenge for the loss earlier in the season to advance to the district championship and secure a spot in the region.

“It’s special to win and it’s special to get the win against a rival and a good team like Boyle,” Danville coach JD Smith said. “Ultimately I thought it was a hard fought game for both teams. It wasn’t separated by much.”

Like the match in September, Monday’s contest was a defensive struggle that saw only one goal, Karolyn Valko’s penalty kick that found the back of the net with with 28 minutes remaining in the game.

“I was happy with the first half but we wanted to break through. Second half we applied even more pressure,” Smith said. “It was one of those things where with pressure you get stuff like penalties. It was good to see Karolyn Valko —a freshman — step up and finish.”

Earlier in the half, the Lady Ads had a couple of chances to score, including one where they had beaten the Rebel keeper. That chance was deflected out of bounds and led to a corner kick that DHS could not capitalize on.

After the Valko goal, the Rebels put the pressure on, and had multiple looks at the net in one flurry where a crowd formed around Danville keeper Sophie Sanders — playing her first game since the last Boyle County meeting — but failed to find the net.

“My concern was could we weather the next couple of minutes. Boyle isn’t the type of team that’s going to roll over. They’re not going to give up. They’re going to keep fighting and they put us under a lot of pressure,” Smith said. “So it was good to see us weather that and get our heads back on. I thought we defended a little too much there late, we held back instead of pressing.

“But at the end of the day, I was very proud of the effort the girls put in. I was proud of Sophie Sanders come back and get this shut out along with the defense.”

In the district championship on Wednesday, the Lady Admirals will take on Garrard County. Earlier in the year, the Lady Lions snapped their losing streak to Danville.

“It’s been extremely even in this district this year. It’s been a lot of games not separated by a lot of goals,” Smith said. “Just as we were ready to play tonight, we know we have to come out ready to play Wednesday because you know your opponent will.”