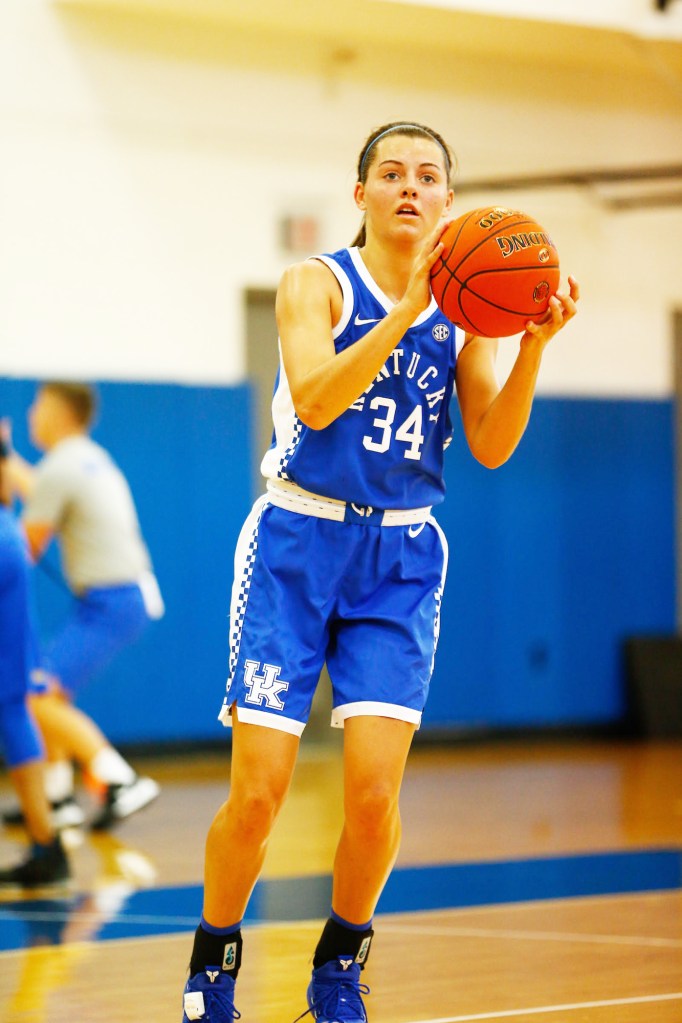 Emma King says that experiencing Big Blue Madness as a UK player will be totally different than as a recruit. (Photo UK Athletics)

She’s been to Big Blue Madness as a recruit but former Lincoln County standout Emma King knows being in Rupp Arena as a Kentucky player Friday night is going to make Madness a whole lot different.

“It is completely different watching it and being in it. I am just going to try and not embarrass myself when we start playing or when we just come out because I am the kind of person that would just fall over or something,” said King.

Every player on coach Matthew Mitchell’s team — as well as John Calipari’s team — will have an individual introduction. Some dance — but King says she will not do that.

“I was going to try and do a backflip when they introduced me because I can’t dance. So I was going to do something cool like a backflip but then I realized that would not be very smart, so I gave up on that,” she said.  “I can’t dance, though, so I may just have to wave and hope not to fall.”

King, a three-star recruit, averaged 18.5 points and 7.3 rebounds per game as a senior while shooting 44 percent overall and 84 percent at the foul line. She finished her career with over 2,500 points and 750 rebounds.

She spent hours in the gym shooting on her own in high school. She still does that often at UK to prepare for her freshman season.

“I get yelled at because we have the shot tracker that you are supposed to put on your shoes and it tracks your shots (thanks to a  chip in the ball that measures everything from shot velocity to shot location to makes/misses) so they know where you are shooting from, how many you make,” King said.

She joked that Daniel Boice, UK’s director of player development, was not happy she was not wearing the tracker.

“Daniel said, ‘Emma I love seeing you in the gym but you have to wear that.’ He wasn’t happy. But I try to go every week day still,” King said. “At Lincoln I would try to make 250 3’s every time. I don’t do the same thing there because that takes a really long time.

“I am a little more busy now and we do a lot of running, conditioning and we get a lot of shots up in practice, so I don’t try to do that as much on my own. But I try to shoot at least 300 shots every day. It just works for me right now.”

She’s not sure her game has “changed” since she arrived at UK in June, but she does think she plays a different way now due to the competition she has.

“In high school I liked to drive (to the basket) a lot and now I don’t drive as much because I am more of a shooter,” King said.  “Not that I am intimidated to drive but I know my best isn’t driving and finishing — and that is something I am working on with (assistant) coach (Kyra) Elzy.

“I am working on the pull-up game more and they (the coaches) know what they are doing. I have tried to implement that a lot more into my game. Not just shooting 3’s or going to the basket, which I could get away with in high school.”

Of course, she told herself last season she would shoot more pull-up shots but admits that was not as much fun as shooting 3-pointers.

“Dad told me forever I needed to work on my ball handling and I told him I did but I didn’t want to do it. Now I have to do it because if you want to get better, you have to do it.”

King’s father, Eric, often accompanied her to the gym for her extra high school shooting workouts. He also had his youngest daughter work on the family farm in the summer.

“I haven’t touched the cows in a couple of months, and I haven’t missed it one bit. We were talking about it at dinner with (sisters) Katie, Jenna and a couple of our friends and cousins,” King said. “We talked about farm stories and I don’t miss getting yelled at because the cows are doing something stupid.”

King believes Kentucky, despite the loss of Maci Morris and Taylor Murray off last year’s team, is doing to surprise a lot of people this year.

“I am just surprised by how willing everybody is to get up and go. We had a meeting the other day and everybody has a common goal to win a SEC championship and see how far we can get in the NCAA Tournament,” King said.

“I know that we have a lot of older players (five seniors) and this is their last year so they want to do something special. It blows my mind how prepared everybody is to get going and do that. They want to do better and want to work. It’s exciting.

“I think we will be pretty good. We have depth. I think we will do just fine and surprise a lot of people. I think a lot of people know we are going to be good. Coach Mitchell wants us to be in the best condition. Nobody wants to go out and run but we all have the same goal, so you are willing to do it because you want to achieve it. The more work the better because we know we it can do for us individually and as a team.”