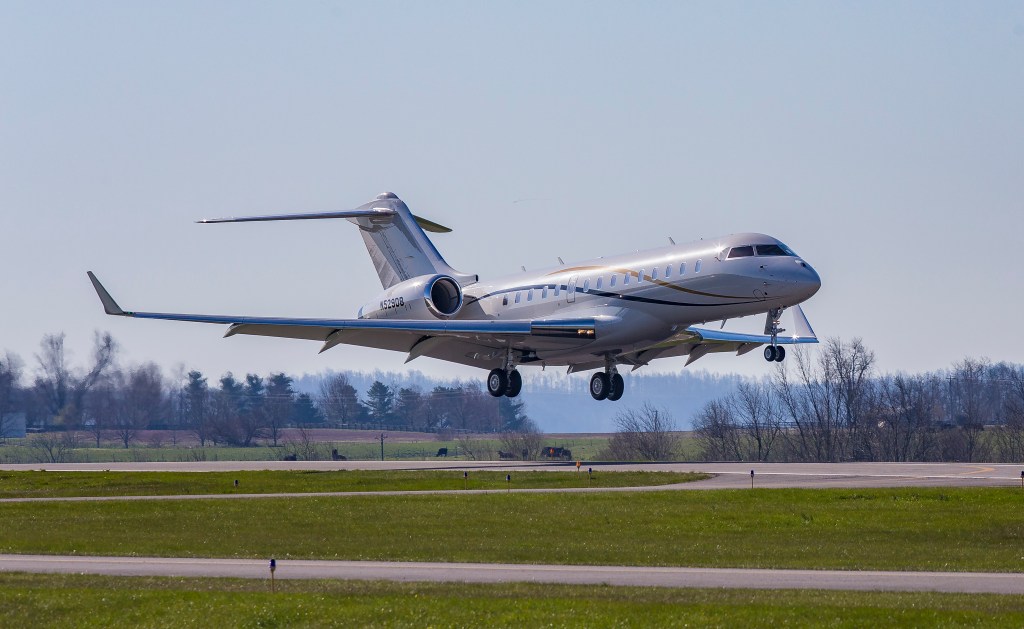 Photo by David Caldwell An airplane lands at the Danville-Boyle County Airport, which is celebrating its 85th anniversary on Saturday.

In 1934, a group of pilots and businessmen dedicated the Danville Airfield, which was just a large, flat, field near Junction City, as an official airport. On Saturday, more pilots and businessmen will celebrate this 85th anniversary with a free open house for the public. Also, many pilots from near and far will be flying to and landing at the Danville-Boyle County Airport and Stuart Powell Field to help celebrate the improvements and expansions that dedicated flight enthusiasts have made there over the decades.

Jake Bell, pilot and member of the airport’s Community Auxiliary Board, said they are proud to show off the facilities.

From 3 to 7 p.m., the public is welcome to visit the airport and watch as pilots take off and land. The “fly-in” is sort of like a car show, Bell said, with vintage and contemporary planes.

Also, corporate hangers will be open so that visitors can see the jets and planes that use the airport regularly. One of the corporate airplanes based at Stuart Powell Field regularly makes non-stop trips to California, Bell said.

Several information booths featuring local aviation businesses and organizations will be set up, including the Aviation Museum of Kentucky, Eastern Kentucky University Aviation program and Wings of Flight training school. An EKU flight instructor will have an airplane on-site, and Air Evac and Kentucky State Police helicopters will be on hand for visitors to see up close. The local Civil Air Patrol cadets will be showing off their newly acquired aircraft.

Bell said the airport board wants to show the public the many aviation career opportunities that are available locally.

For an extra treat, a hanger will be turned into a movie theater where two older films with aviation themes will be shown. One movie stars Shirley Temple, while the second is a cartoon with Woody Woodpecker, Bell said. Free popcorn will be offered and people are asked to bring their own chairs and blankets to sit on.

Bell said, “Our goal is to promote the airport and aviation in the local community. Stuart Powell Field has had a major impact on my life and career choice, and because of that I enjoy getting to promote and showcase the airport to people who aren’t aware of just how important an asset it is.”

On Oct. 5, 1934, The Danville Chamber of Commerce sponsored the dedication service of the Danville Air Field and named it the Hi Richardson Airport. At that time, the airport was just a big open field, probably owned by Richardson, said airport board member David Caldwell. Pilots landed on the grass “whatever way they wanted to.”

According to the program for the occasion, the Danville High School Band held a concert at Main and Third streets. Later in the afternoon, it supplied the “pep music” and by 2 p.m., pilots were landing on the field. Following the service, spectators were given the opportunity to take a plane ride. At 10 p.m. a reception and dance was held at the Gilcher Hotel for the pilots and their guests.

In 1937, Palm Beach Company, which was part of the Goodall Co., announced plans to build a plant in Danville to manufacture men’s suits. As a gesture of appreciation for coming to town, local officials and businessmen collected money to give Palm Beach. However, the company “kindly” turned down the gift and suggested the city use the money to invest in an airport.

So, in 1937, the Hi Richardson Airport was acquired by the governments of Danville and Boyle County and was renamed Goodall Field.

In April 1941, the facility was activated by the federal government, and in 1943, Centre College entered into an agreement with the Department of Defense to provide academic instruction to prospective pilots.

Nearly 1,800 cadets received 10 hours of flight training and in World War II, 51 of the cadets were killed.

By 1960, the Danville-Boyle County Airport Board was created by a joint resolution, and in 1968, Stuart Powell was appointed to the board and eventually became chairman. The airfield was later named in his honor.

In the late 1960s, the airport’s longest runway was built and was originally 3,400 feet long. It was extended to 5,000 feet in the mid 1980s to accommodate larger planes.

Today, flights land in Boyle County from nearly every state in the U.S.

Airport manager Christian Barker said the airport can’t allow international flights to land because it doesn’t have customs capabilities. However, flights routinely go to the Bahamas, Cozumel, St. Martin and Canada. Several years ago, a flight left Boyle County was was going to Italy, Barker said.

Annually, the Danville-Boyle County Airport logs about 26,000 operations (landings and take-offs), he added.