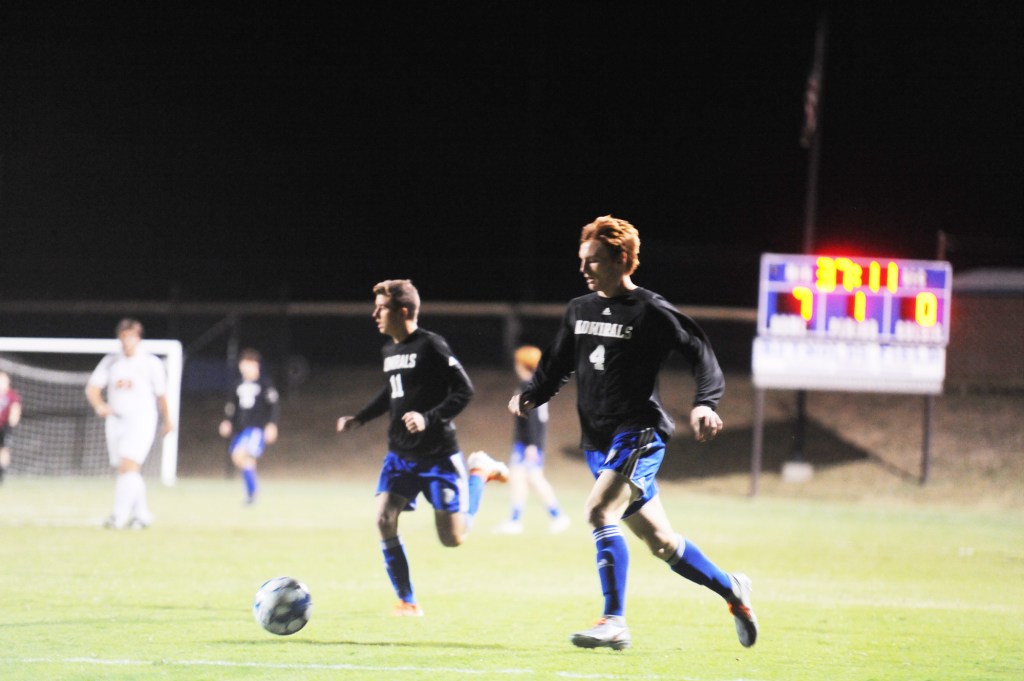 The top seed in the district took care of business Tuesday night with a 10-0 victory over the Garrard County Golden Lions in the first round to advance to the championship match.

“The district championship was one of the goals they’ve had since the beginning of the year,” Danville coach Brent Beauman said. “We knew we had to take care of tonight, and we did that and now we’re one step closer.”

It didn’t take long for the Admirals to jump out big. Remilson Forlevil scored first, less than two minutes into the game, off an assist from Ethan Redmond. Redmond would get his first goal of the match two minutes later when he put a sliding shot past the goalie to the right. Forlevil would get his second goal off Redmond’s second assist 30 seconds later to make the lead 3-0 before fans had even settled into the stands.

With the big lead, Beauman was able to utilize his reserves and get them some playing time in the district tournament.

“A lot of guys that don’t typically get to play came in and did some fantastic things. First half, Leif Pellet was making some great passes, some one-two touches,” he said. “That’s stuff we’re trying to get everyone to do so it shows they’re listening in practice. You hate that everybody can’t play every game and every minute, but nights like this it’s good and they deserve it. Everybody works hard in practice and they’re ready.

“We were talking about before the game about trying to be perfect in the things we’re working on. It’s different in practice and in drills, so in an actual competition we can focus on things and get them to where we need them to be.”

Redmond (two goals and two assists) and Remi (a hat trick) led the way in points for the Admirals on the night. Jesus Gonzalo-Medina would add a goal late in the second half, and Gabe Cisneros (two), Briar Sanders, Ashton Nash and Seth Brunner all contributed assists to the effort.

On Thursday, Danville has to beat Boyle County for a second time this year if it wants to claim its third straight district title.

“We know Thursday’s going to be a heck of a game. Anytime it’s Danville Boyle, it’s a good game,” Beauman said. “We’ll work on some stuff tomorrow and hopefully come in ready to play on Thursday.

“We know what we want to do and what we’ve focused on all year. If we do those and do them right we should be ok,” he added.. “But if we get selfish or get caught up in the moment, it can go the other way real quickly. They’re a very skilled team so we need to make sure we’re using our brains a lot and reading the plays of the game and the situations. Not just trying to run around and out-dribble people.”

The rematch happens at 7:00 p.m. Thursday night at Danville.