Darrian Bell is a leader on and off field 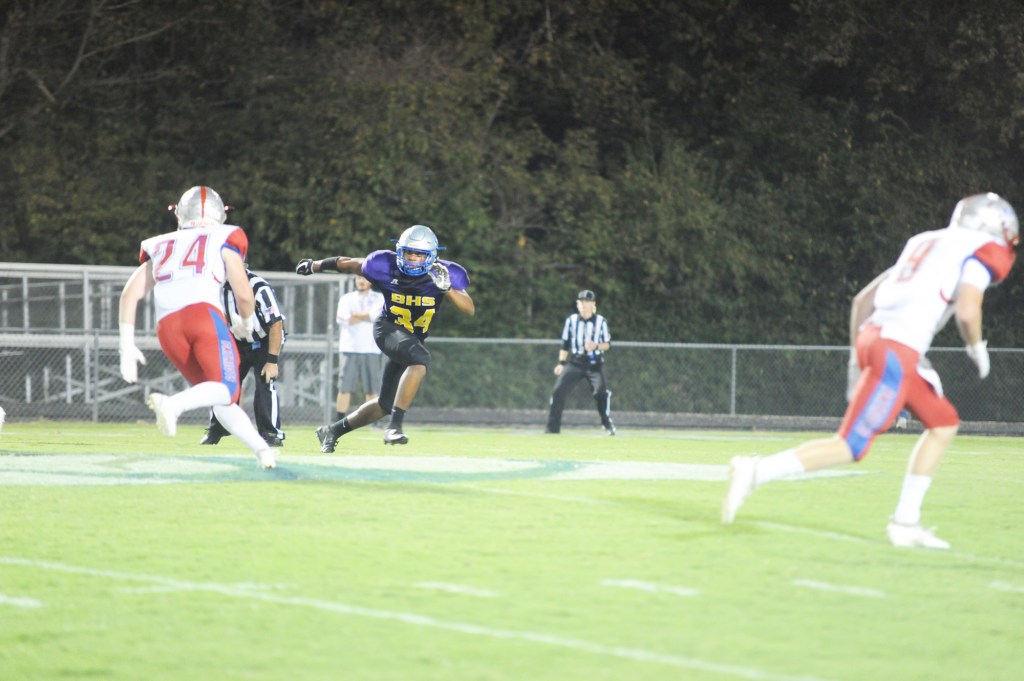 “He’s got a really good feel for the game. He’s very coachable. He listens and absorbs everything that you tell him,” head coach Clay Clevenger said about his captain. “I think it’s just the grind that he puts in. The ability to absorb information and then apply it once he gets out onto the field which is always important.

And Bell does stuff the stat sheet. He’s totalled around 360 tackles in his career as an Admiral, including leading the team in tackles as a sophomore in 2017. That was the year that Danville finished undefeated and 2A state champions and ranked in the Top 5 in the state.

“That was my chance and opportunity to step up and play. I got to show people that I was ready and that I want to play football and I’m not scared,” Bell said about that season. “I love football, I’ve been playing since I can’t even remember how young. I just want to come out here and play.”

This year, Bell is the unquestioned senior leader on the defensive side of the ball, and in the locker room. He’s also the leading tackler again, with 75 on the year. He also has more solo tackles than the next leading tackler has total tackles.

How does Bell find the ball carrier so easily?

“I’ve grown up with a nose for the ball. I want to play, I want to get out there and have fun. It comes a lot with trusting my coaches,” he said. “Doing what you’re supposed to do. Doing your job and if you do that, everything else falls into place.”

But Bell doesn’t just get it done on defense, as a tight end, this year, he’s hauled in eight passes for 153 yards and two scores, including a long TD catch in Danville’s most recent win over Allen County-Scottsville. 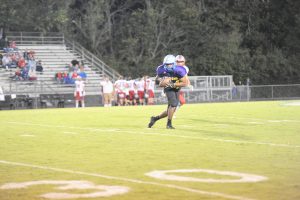 Despite excelling at and preferring defense, Bell can make key plays as a tight end. (Photo Derek Brightwell)

After that score, Bell jokingly complained that he was getting winded with all of his teammates celebrating with him, but conditioning is key for him to be able to stay on the field both ways.

“It takes a lot more conditioning. You’ve got to do a little bit extra and push yourself a little harder to come out here and be 100 percent,” he said. “But I’ve got help — like Bryson Young will fill in for me on offense and Xzavion Grey does a great job for me of just being in there and being ready to play just like I was my freshman year.”

Bell also says that, since defense is where he wants to play at the next level, he wants to be out on that side of the ball all of the time, but likes being “on both sides of the ball and help(ing) the team win.”

Defense is where Bell shines, and it’s not just his ability to hit people — which he is very good at — it’s also his ability to be the quarterback of the defense that makes him stand out.

“He’s your signal caller out there. He makes sure we’re getting lined up and getting our checks,” Clevenger said. “I think our young guys look up to him. He’s no doubt the leader of this football team.”

Bell — who takes coop and has some free time outside of class — says that Clevenger often calls him into his office to break down game film, and that it helps him as a leader on the field.

“It takes a lot for me to be able to know that and come out to practice and apply it. You just have to be smart with it,” he said. “You have to know what he’s talking about. You have to know their offense and our defense and know what the best way to defend it. He’s going to find the way and I’ve got to put them in the right place.”

His leadership doesn’t stop during the games, either, and that’s why Clevenger trusts him to be the leader when the lights are on.

“He’s always been a hard worker. Whether it’s at practice or those 6:00 a.m. workouts, he’s always pushing to get better,” he said. “Pushing himself to get better and pushing his teammates to get better. That’s what makes him a special young man to be around. That’s why all of the good things that happen and come his way are very well deserved.

“I know this season — his senior year — hasn’t gone the way he’d have hoped, but it hasn’t affected his attitude and his ability to work hard every day. He brings it every day and does what he needs to do. That in and of itself says a lot about his character.”

But if you ask Bell what his favorite part of Friday Night Lights are, his quick to answer with a smile: “Oh definitely hitting people.”