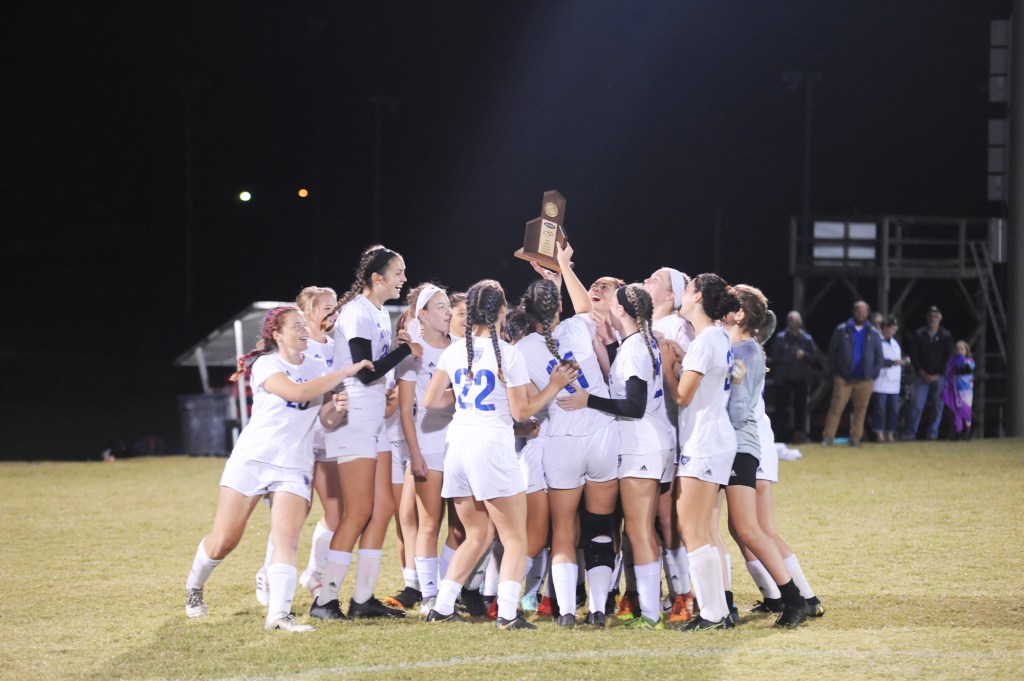 All year long, not much had separated the teams in the 45th District. So it was fitting that Wednesday night’s championship match between Garrard County and Danville came down to 10 penalty kicks. As the dust settled and the final ball was kicked, the Lady Ads came out victorious with a 5-4 penalty kick advantage after a 2-2 draw.

“That’s about as close as you can get. That’s what it is. Brett’s (Deshon, Garrard coach) raised the level here. They’ve had a great season,” Danville coach JD Smith said. “We knew it was going to be a battle. I’m so extremely proud of my girls — they came from behind twice to equalize. And then they were mentally tough enough to see it through.

“I am super proud of them,” Deshon said about his team. “This was a position we’ve never been in and we fought to the very end. It’s just unfortunate that the result was what it was.”

In the first half, an incredible effort by Hannah Day was the only goal. Almost 10 minutes into the match, Day took a ball through three Danville defenders and played it from the right side in a perfect position just over Danville keeper Sophie Sanders’ hands. 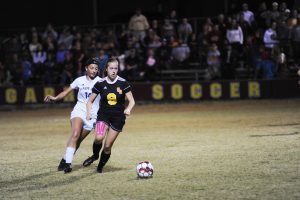 Hannah Day scored both of Garrard’s goals, including an incredible effort in the first half. (Photo Derek Brightwell)

“Hannah Day — she can finish. She has a nose for the ball,” Deshon said.

“Offensively, they were about as efficient as you could ask for tonight,” Smith said about Garrard. “I thought we did a good job limiting their opportunities but they took advantage of the opportunities they had.”

The Lady Ads had several good looks at the net, including a Karolyn Valko PK five minutes into the game, but couldn’t capitalize on any of them.

“I’d have liked to see us be a little more efficient but that’s how it goes,” Smith said. We kind of had to play into it a little bit. I thought we came out a little timid in some areas.”

In the second half, Danville broke through in the form of a ball that bounced around a crowded box until it found the feet of Ahyana Burnett who was able to put it in the net.

“It just kind of bounced around the box a little bit and fell to Ahyana’s feet. What you want in that situation is someone who’ll stay calm,” Smith said about the play. Luckily she was able to get enough on it and turn it toward the frame.”

Less than 10 minutes later, Day was able to answer back off of a Marianna Cortes assist. Day took the ball to the left on a breakaway and drew Sanders out of the net. A nifty play to get by the keeper left the net open and she didn’t miss the chance to go up 2-1.

But Danville was able to put the equalizer in five minutes later when a ball took a fortunate bounce toward Holly Helmers who was able to just get a foot on it and floated it over Vanessa Hume’s hands to tie it up.

“I joked with her that I didn’t think she knew that ball was coming,” Smith said about the play. “With players like that, it’s where you want the ball.”

And that was it for scoring for the rest of the game. Both teams had great looks at the net, but solid defense and keeping kept the score knotted at two.

That stayed true in the first overtime period. A quick five minutes saw Garrard on the offensive, but unable to capitalize and in the second OT, Danville was the team with multiple looks at the net — including a corner kick as time expired. 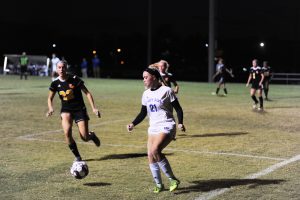 Lara Akers was the final player to kick for Danville in the second wave of PKs and put a perfect shot in the net. (Photo Derek Brightwell)

“Overtime I told them that I was proud of their effort and how hard they worked,” Smith said. “And then I asked that whatever they’ve given me, if they could just give me five percent more we’ll win. I felt like they’d already given me 100 percent. So it would be selfish of me to ask for a whole lot more. And mathematically incorrect.”

In the first wave of penalty kicks, both teams knocked in two each. Valko put the first chance in the back of the net with ease and Emma Warren answered for Garrard. Helmers’ try hit off the crossbar and Cortes fired one over the net and onto the softball field behind the goal. Jenna Akers put her try in the same place as Cortes and Day’s was saved by Sanders. Ella McKinney put her try in the back of the net, but Nancy Perez was able to equalize. Burnett put a perfect ball on her try — the last for Danville in the first wave — but Hume made a spectacular save, leaping through the air to tip it off the crossbar. It ricocheted off the right post, but rolled safely out of the net. Lindsey Onan-Owens shot also found the hands of Sanders.

In the next wave, Mariah Burnett put hers off the cross and Sanders kept Lindsey Hiler’s try out of the net. Hope Helmers converted her try as did Lexi Hale for Garrard. Lucy Kate Gibson’s attempt was saved by Hume, who in turn had her own try knocked away by her counterpart. Madison Terrell put one off the hands of Hume, but it rolled in to put Danville up in the PKs, but Taylor Bailey made up for it by answering with a goal of her own.

Then Lara Akers came up and put a ball in the top left of the net that Hume had no chance on to put Danville up heading into Garrard’s final try. Abby Isaacs put a good look on it, but Sanders rolled to it to make her fifth save in the PK session.

“I can’t speak enough to the people who stepped up in penalties,” Smith said. “Lara — that was a great penalty in a stressful situation. And Sophie — what more can you ask for as a coach. She saved five penalties on the shootout. She got us through it. All credit to her and her effort to come back from that injury and to have a tournament like this.” 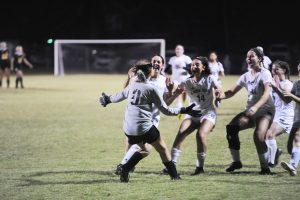 Sophie Sanders being mobbed by teammates Karolyn Valko, Ella McKinney, and Holly Helmers — all of whom made the All-Tournament Team. (Photo Derek Brightwell)

Sanders’ performance in the tournament — she recorded a shutout in the first round — earned her a spot on the All-District Team. She was joined by her teammates Valko, McKinney and Holly Helmers. Garrard’s trio of Day, Cortes and Hume made the team as did Alyssa Montgomery and Lindsey Warriner from Boyle County and Kennedy Kirkpatrick and Libby Renner from Lincoln.