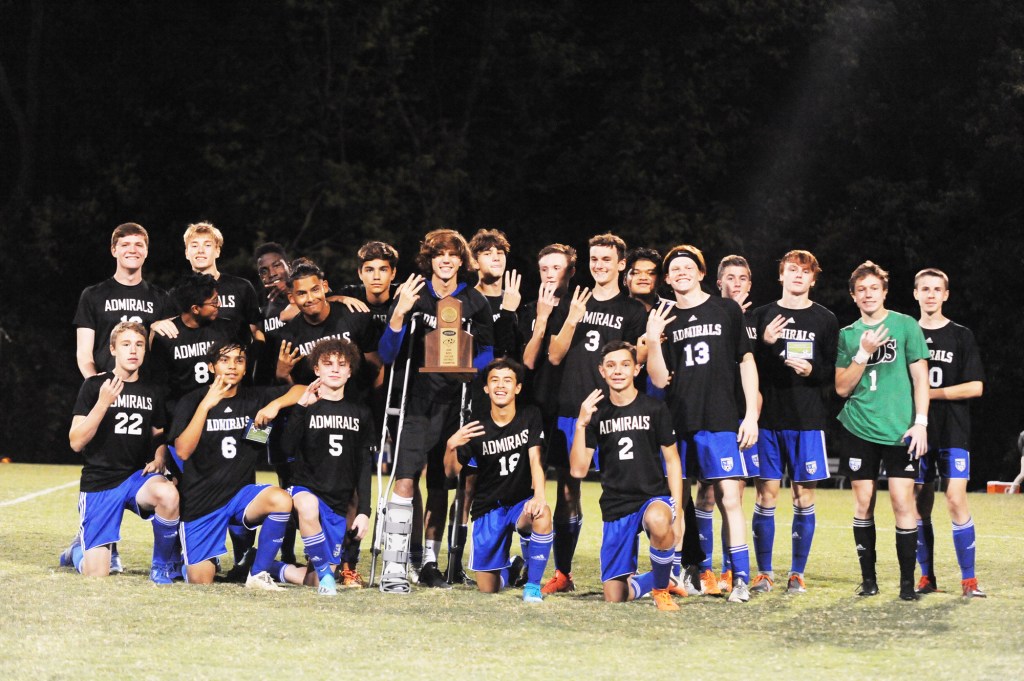 For the third year in a row, the Danville boys soccer team hoisted the District Championship trophy, completing the boys-girls sweep of the 45th District after beating Boyle County 6-0 Thursday night.

“Every year is different. Every team is different,” Danville coach Brent Beauman said about the streak. “Obviously you’d like to keep on winning. This is such a good group — a strong senior class.”

Every team wants to start fast and it doesn’t get much faster than the start the Admirals had. 24 seconds into the match, Seth Brunner puts a perfect ball down field that Remilson Forlevil possessed behind the Boyle line and put it in the top left corner of the net to give the Admirals a lead they wouldn’t surrender.

“That does allow you to take a little bit of a deep breath,” Beauman said. “It’s definitely a great way to start every game if you can. It was a good ball and a great finish. Hopefully we can start every game like that.”

To Boyle’s credit, the Rebels bounced back from that goal and went on to have an arguably better half than the Admirals.

“I think we responded well. We didn’t panic,” Boyle coach Cris McMann said. “I thought we were possessing the ball well in the first half.”

“Right after that they were attacking and putting pressure. It wasn’t like the game was over,” Beauman agreed. “They possessed it a lot in the first half. We talked a lot about that at half time because they were creating a lot of things that we weren’t too focused on stopping. We were just wanting to go and attack and we need to be smarter with that at times.”

One of the best looks the Rebels had all night was when Judson Perry fired a shot from outside the box that appeared to be on patch to just float under the crossbar, but Keeton Burnside gave an incredible effort to get a finger on it and push it out of the goal to preserve the shutout. 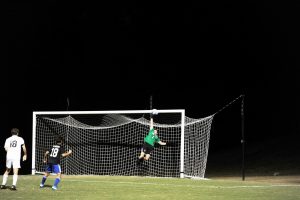 Keeton Burnside’s save to preserve the shutout in the first half. (Photo Derek Brightwell)

“To go through district play in our district and not allow a goal says a lot about our defense with Keeton and Seth,” Beauman said.

Despite having less chances, the Admirals made the most of them. They picked up their second goal on a ball that got lost in a crowd around the net and just sneaked out. Iain McAlister and Boyle keeper Ethan James arrived at the ball at the same time, but McAlister’s left foot was just fast enough to slowly roll the ball into the net for the 2-0 lead.

“That is such a good goal. You see a big bunch of stuff and the ball pops out. Then Iain — it’s just a hustle play,” Beauman said.

The Rebels went into the half down 2-0 but knowing they played the better side and were “still in it,” according to McMann. The Admirals went in up 2-0, knowing they could play better.

“That’s kind of how they’ve been all year. You’d think every game we were down 5-0 at halftime because we’ve just set a high standard because they’re able to do it,” Beauman said. “They have the ability. It just speaks to the quality of player that they are that we can play a bad half and still be up 2-0 to a good team.”

In the second half, however, it was all Admirals. Ethan Redmond fired two shots right at James that deflected off of him and found its way to Forlevil who’s shot also bounced off James body for another chance that was knocked out for a goal kick less than three minutes into the second.

Redmond would get two more breakaway looks at James, the first from the right of the net that he just pushed too far to the left and the second from the left that he fired over the net after pulling James out of the net.

With 24 minutes remaining in the match, however, Redmond took the ball and split two Boyle defenders at midfield to give himself a one-on-one with James. He made the same move as before, getting James out of the net and deftly avoiding him to the left leaving him with an open net. He didn’t miss that time, putting it in for a 3-0 Admiral lead. 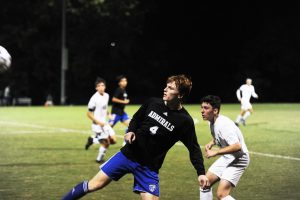 “Ethan Redmond is a train running downhill. He’s a hard one to stop,” Beauman said.

“Redmond is so fast. I didn’t realize he was that fast. He was very good,” McMann agreed.

Cisnero found Redmond 10 minutes later for an identical play. Redmond made his way through a giant hole in the Rebels’ defense and scored on a shot that deflected off the left post and in for a commanding 4-0 lead.

“He was getting frustrated with himself because he had two easy goals that he blew and then on the third one Briar (Sanders) is just standing wide open,” Beauman said about the first Redmond goal. “You can tell when he finally got that first goal it was just a relief. He works off that kind of stuff. He’s not going to get frustrated and quit, but when he gets that first one you know he’s going to get another one — it’s coming.

“They were holding a real high line so we kept going offsides and we told them it has to come from the midfield,” he added about the second. “Then we started pushing them out wide to kind of spread them. And man there was holes and we started hitting them.”

The Admirals would add two more goals late to put the icing on the district cake, both of which were assisted by Briar Sanders to bring his career assist total to 61, adding to his own school record, and approaching the top of the Kentucky leaderboard.

The draw for the regional tournament is Friday at 1:00 p.m., so the Rebels and Admirals won’t know who they play until then, but Beauman believes that if his team plays like this, they can hang with anyone in the state.

“A lot of guys just playing to their ability. Nobody was really doing anything special — that’s just what they can do,” he said of Thursday night’s win. “That’s what you want out of your team this time of the year. Clicking on all cylinders and everybody’s healthy. Now we’re ready to the next one.”