‘Above and beyond’ Danville firefighters save kitten trapped in engine compartment 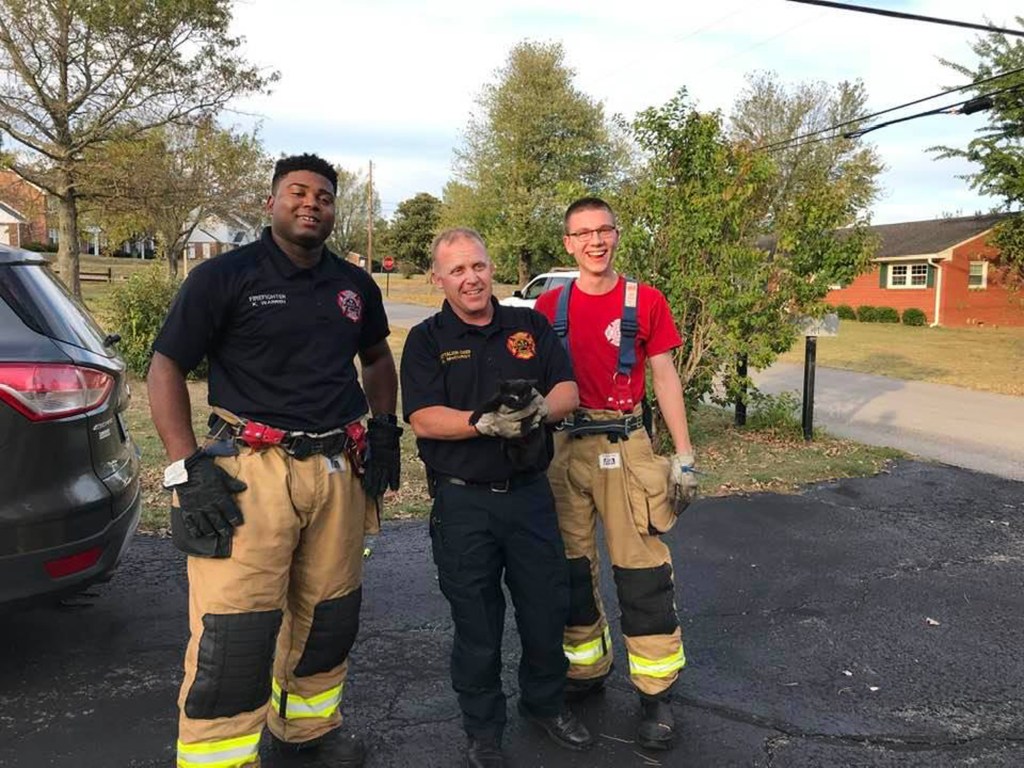 From left, Danville Firefighter Kyron Warren, Batallion Chief Mike McCurdy and Firefighter Oliver Adams pose for a picture that resident Donna Fector wanted to take. She was impressed with how the members of Engine 12 went "above and beyond the call of duty" and saved a kitten that had crawled up inside her vehicle from underneath.

Many are familiar with the scenes in old movies or television shows when firemen are called to help a stranded cat up in a tree. Thursday, resident Donna Fechter actually found herself in the situation to make such a call, and Danville’s Engine 12 responded.

Fechter, who works part-time at Melton’s Deli on Main Street, said she got to work and went about her day as normal. Then someone walked into the restaurant, “and he said, ‘Do you realize there’s a kitten that just came from the inside or underneath of your car?’”

She said the kitten came out for a minute, then crawled right back up into her vehicle, from underneath.

Fechter and others made attempts to get the kitten out, even using tuna as bait, but the kitten wouldn’t bite.

“So, I brought the car home and put some food underneath, waited about an hour and a half …” She then realized the kitten couldn’t get out, so she called central dispatch, thinking Animal Control would come. “But they said no, they’d have to send the fire department because it was inside the car. It did make me laugh; I thought about how the fire department would come and get cats out of trees.” 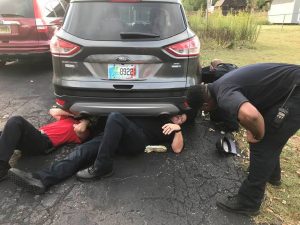 Photos submitted
Danville Lt. Jerry Domidion peers out from underneath a vehicle as other firefighters assist in trying to save a kitten that had crawled up into the vehicle. Donna Fechtor discovered she had driven to work with the kitten stuck underneath her vehicle. She drove back home, and members of Engine 12 came to her home to help save the kitten.

Fechter said the Danville Fire Department members who responded were great. They got up underneath the vehicle, found the scared kitten and removed it unharmed. “They even had to leave to make a run, but came right back,” she said, working diligently until the kitten could be retrieved.

Fechter put the kitten in a cage on her front porch, then brought it to the Danville-Boyle County Humane Society (DBCHS), where she hopes it will be adopted. She put photos out on social media, asking friends what the cat should be named. “We came up with Sparky Boo …” she said, due to it being found in the car, plus it is all black, “like Halloween.”

Fechter said she was impressed with the firemen’s actions.

“Talk about going above and beyond the call of duty,” she said. “These guys were just great.”

Those who answered the call were all off shift Friday morning. Danville Firefighter Sammy Young said the fire department does get some animal-related calls; maybe one every few months.

“Animals, especially cats — the kittens get separated from their moms and like to find places where it’s warm, especially when it starts getting cold at night like it has been,” Young said. He said they are known to try to get close to warm engines, sometimes right next to them or inside the engine, if they can find a way.

“It’s the warmth, mostly. Or sometimes it can be curiosity — like the old saying.”

Young said it’s smart to check the engine of your car before starting it if you park outside and there are animals roaming your neighborhood. “And always make sure they’re clear from your vehicles before you start them.”

He said often, when people leave food outside for animals, it will attract strays from the area, which are more likely to crawl up in an engine.

“It’s not that common, but yes, we do get these kinds of calls. It’s not really surprising — there’s a long history of firemen getting called for animals getting stuck in odd places,” Young said. “To us, it’s just like a regular service call. We go out and check on it, and see what we can do.”

Fechter said Sparky Boo weighs 2 pounds and may possibly have a respiratory infection he will be treated for. “But he’s housed in a wonderful facility (at the humane society), and will be given antibiotics and wormed. I’ll keep everybody posted on his progress. They said it could take up to three weeks before he can be adopted.” 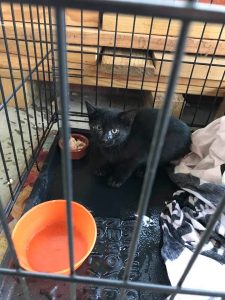