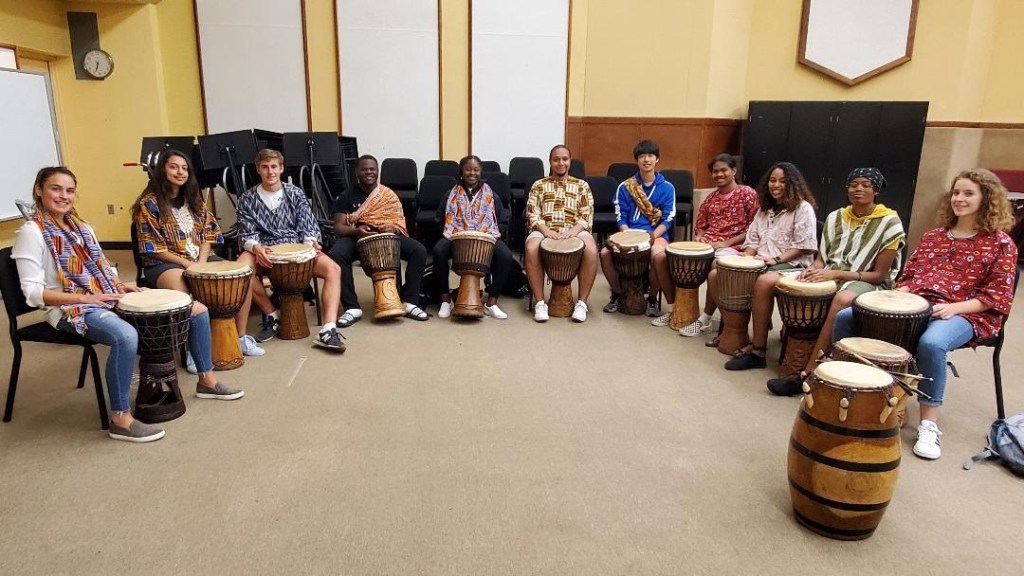 The Art Center of the Bluegrass will host four arts appreciation programs in October. It all starts with a special Tuesday edition of Lunch with the Arts on Oct. 15, featuring  a lively demonstration of traditional African, South American and Caribbean rhythms. Percussionist Tripp Bratton and his Centre College African Percussion Ensemble will perform songs and dynamic drumming improvisations.

Bratton is a Lexington based performer, composer, producer, and educator who was voted Best Drummer at the 2018 Lexington Music Awards. He recently joined Centre College as adjunct percussion instructor and director of the African Percussion and Rhythm Fusion Ensembles.  He is lecturer of percussion and director of the African-Latin Percussion and Contemporary Percussion (Fusion) ensembles at Berea College. In addition, he serves as director, composer and arranger for the award winning March Madness Marching Band, music director for the Rakadu Gypsy Dance, and Sabi Diri sbi multicultural dance troupes.

At Tuesday’s performance, Bratton and Centre’s African Percussion Ensemble will feature a variety of percussion pieces and styles. In addition, Tripp will provide some basic instruction on how to jam to the rhythms and facilitate an open drum circle. The audience will be encouraged to join in on the fun as there will be a number of extra drums on hand for folks to play along. Those planning to attend are also invited to bring their own rhythm instrument to the event. 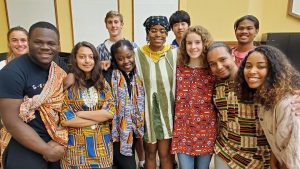 According to Bratton’s biography, “Over the course of his nearly 30 year career, he has been the recipient of numerous grants, scholarships and awards for a wide array of artistic endeavors, from receiving the John Philip Sousa award as a high school student and subsequent full scholarship to attend the School of Music at the University of Kentucky for applied percussion and composition, and continuing over the years to include grants from the National Endowment for the Arts, Southern Arts Federation, Alternate Roots, the Andy Warhol Foundation and several grants and awards from the Kentucky Arts Council for his educational programs and original compositions.”

Bratton’s other current activities include designing and teaching preschool and elementary educational programs and summer arts camps, and performing with numerous top musicians. Those include regular performances with Lexington bands C the Beat, Ethos Quartet, The Patrick McNeese Band, Bruce Lewis Band. He also works with his Grammy-nominated mother, jazz vocalist Gail Wynters, and has been featured in special concert appearances with the all-star band, Tin Can Buddha, which was highlighted in a 2011 documentary film which aired on Kentucky Educational Television.

The Art Center’s fall arts appreciation lecture series also kicks off on Tuesday, moving to a new evening time slot of 5 p.m. The fall series will feature three presentations on consecutive Tuesdays. Registration is $10 per event (at the door or online) or $25 in advance for all three.

Hubbard was an artist and author, known for his simple lifestyle. His art was largely pastoral, including oils, watercolors, and woodblock printing. Author Wendell Berry was a close friend of Hubbard’s who wrote and lectured on the Hubbards’ lives.

Dr. Kohler received his PhD in American Studies from the University of Iowa. He was Humanities Division Chair for many years at the University of Pittsburgh campus in Bradford, PA. He edited “Harlan Hubbard Journals: 1929 – 1967,” published by the University Press of Kentucky. He currently lives on a farm in McKinney, KY. 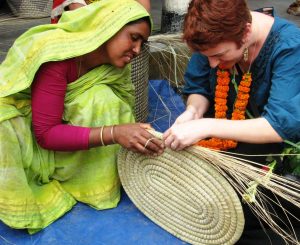 In her talk, Trombino-Schroeder  will share some of the stories of these artists and how their handicraft work helps to elevate their society role in low-income countries. She will also have samples of their work to display.

The Pre-Raphaelite Brotherhood had an air of the fraternity about them; they were a secret society with high ideals but whose biographies include some comic missteps.  And though they trained their eyes on the past, they ended up helping to shape techniques and assumptions that undergird modern art.

Dr. John Kinkade, Associate Professor of English at Centre College, will introduce listeners to the Pre-Raphaelites.