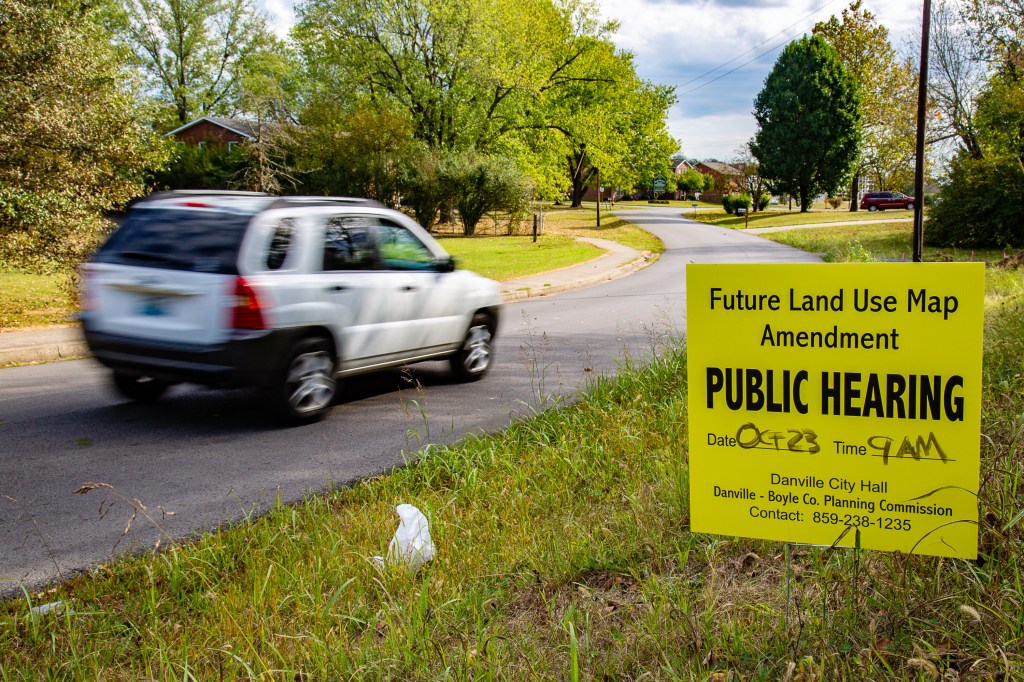 Photo by Ben Kleppinger A sign along East Main Street across from Henson Park announces a public hearing for a future land-use map amendment that would affect close to 300 acres of land between East Main and Ky. 52.

The Luca Mariano Distillery project planned for farmland off of Ky. 52 in east Danville will be on the agenda at the next Danville-Boyle County Planning and Zoning Commission meeting.

LMD Holdings LLC will be seeking a massive amendment to the P&Z future land-use map that would allow the distillery project to move forward, according to filings with P&Z and P&Z Director Steve Hunter.

“In my 30 years of doing this job, I’ve never done a case this big,” Hunter said. 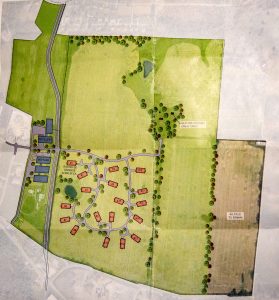 Map from Danville-Boyle P&Z
A conceptual plan for the Luca Mariano Distillery project shows the possibility of a distillery and bottling operations near Letton Drive, up to 18 rickhouses for storing bourbon barrels, and a four-lane road that P&Z Director Steve Hunter said could be a planned eastern bypass in Danville still years away from being a reality.

Hunter said LMD wants to change close to 300 acres of land on the future land-use map, or FLUM. The project, which is headed by Francesco Viola, also has options on around 200 more acres — though those optioned properties aren’t part of the FLUM amendment application this time around. Still, the distillery project could involve more than 500 acres of land when it’s all said and done.

The public hearing is scheduled for 9 a.m. on Wednesday, Oct. 23, at Danville City Hall. The land in question stretches from Ky. 52 just east of Stanford Road north all the way to East Main Street.

A conceptual plan for the distillery project attached to the FLUM amendment application shows a new four-lane road extending between East Main and Ky. 52; Hunter said that road would be part of a future bypass around the east side of Danville, but any plans for that road from the state are still years away from being discussed seriously.

Viola has said previously his project could involve an investment of between $20 million and $50 million over 12 years.

The farmland, which is owned by LMD and others with interests in the project, is currently categorized mostly as low-density residential on the FLUM — meaning the local comprehensive plan expects single-family housing to be the future use for the land.

Hunter said hundreds of acres of single-family housing in that area isn’t really a realistic objective — Boyle County would have to grow exponentially in order for there to be enough demand to actually develop that much housing.

LMD wants to change the FLUM category to “mixed-use employment.” Hunter said that is “a flexible category that’s meant to create jobs.”

But LMD’s plan for arguing in favor of the FLUM amendment is about as unique as the scale of the project: Hunter said LMD intends to show the P&Z Commission there is “a demonstrated overriding public benefit of the proposed development” that outweighs any other concerns.

Hunter said normally, people apply for FLUM amendments by using “compatibility studies” that show the proposed future use would be compatible with surrounding land uses; LMD is not attempting to show that.

In an attachment to the application on file at the P&Z office, LMD argues that “the current FLUM does not contemplate the expansion and growth of the bourbon distilling industry in the Commonwealth of Kentucky, and particularly Boyle County.”

“The property is unique in that it is within the Danville city limits but primarily consists of a large agricultural tract and farmland with (a) well-known historical building on-site,” LMD’s argument reads. “All key attributes making the property perfectly suited for the needs of the proposed development.”

The distillery would be “overwhelmingly positive” for jobs, tourism and the local economy, but the project is “impossible under the current FLUM,” according to the argument.

“Danville’s economic development strategic plan specifies bourbon distilleries as a target market for economic growth, however the current FLUM leaves precious little area to allow for that growth,” the argument reads. “Without amending the FLUM, LMD … would not be able to locate its development within Danville or the surrounding area. The community at large would suffer from the missed opportunity.”

“The rate of Boyle County’s population growth since the 2010 Census … has been 5.8%. This stable but steady rate of growth far surpasses that of other regional counties, but it simply cannot justify the possible future development of single-family homes consuming approximately 274 acres,” the argument reads. “Furthermore, the citizens of Boyle County value the heritage and preservation of its precious Bluegrass farmland. How is that value honored and fulfilled by the development of such an outsized development of single-family homes across 274 acres?”

Hunter said if LMD is successful in convincing the P&Z Commission to amend the FLUM, that’s not the same as a zone change. LMD would still have to come back at a later date and apply to change the actual zone from agricultural to something else, probably “mostly industrial” to accommodate a distillery’s functions.

LMD’s argument acknowledges this fact, stating the FLUM amendment would allow the land to be “later rezoned as industrial business development (IBD).” Such a zone change would not be “out of sync with surrounding uses,” the argument claims.

The conceptual plan LMD filed with its application shows an entrance off of Letton Drive near KC’s Gymnastics that would lead to a distillery and a bottling plant. Beyond those buildings would be 18 rickhouses for aging barrels of bourbon. A road through the property would end in a cul de sac near the historic William Crow House, which LMD owner Viola has said would serve as the distillery’s visitors center, once it is restored.

Hunter said there have been many area residents waiting to hear the next step for the distillery project.

“In the eastern part of the county, (ever since) the coming soon signs went up, it’s been constant,” Hunter said. “They check in with every filing deadline to see, ‘Hey, is the case coming yet?’ So I suspect a fairly big turnout of neighbors (at the P&Z hearing) — just concerned, maybe opposed, maybe in support, who knows?”

The Danville-Boyle County Planning and Zoning Commission will hold a public hearing for a future land-use map amendment at 9 a.m. on Wednesday, Oct. 23, at Danville City Hall.