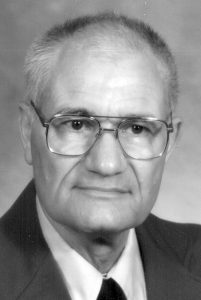 Clyde Roger Meyers, 93, of Danville, passed away on October 7, 2019. He was born November 2, 1925 to the late Harry and Hannah Meyers, Cleveland, OH. He grew up in Cleveland and joined the Navy after graduation from high school. He was stationed in Great Lakes, IL, Indian Head, MD and Anacostia, DC. When he was discharged, he went to Milwaukee, WI, to train in climate control. He went to work for Willard Storage Battery Company and then Trygve Hoff & Associates, both in Cleveland. In 1954, in Cleveland, OH, he married Rebecca (Becky) Bruster of Ithaca, NY. He then began working with Eaton Corporation, Cleveland. He and his family moved to Danville, KY, in 1972 when the climate control department relocated to Harrodsburg, KY. He retired from Eaton/ Signet/ Modine in 1987.

He was a member of First Baptist Church, Danville By-Pass, for 47 years. He served on the offering committee and was an earnest prayer warrior. He enjoyed motorcycling, collecting and designing model trains and activities with his family.

He was predeceased by his wife of 64 years, Becky; his sister, Ruth Lapp and brother, Paul Meyers.

The funeral service will be 11 a.m., Saturday, October 19, at Stith Funeral Home, Danville, and visitation will be 9-11 a.m. prior to the service. Burial will be at Danville Memorial Gardens. In lieu of flowers, memorial donations may be made to Gideons International.