Flue cover a forgotten artifact from the past

Question: Dear Jerry, I bought this piece at a local store and the tag said it was a flue cover? What exactly is a flue and cover and how was it used? I love the details of this piece, including the bug band at the base. Thanks for your time in looking at this. 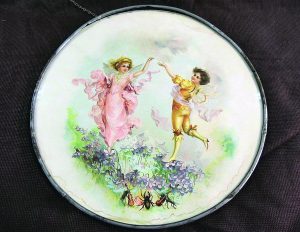 Answer: You know, I write about flue covers every couple of years, and for a good reason. People simply forget what they were used for. There was once a time when people who had wood burning stoves carefully removed the stove pipe at the start of warm weather. Most stoves came up in front of an existing fireplace, and the vent pipe exited through a hole cut into the chimney wall.

The smoke and fumes were funneled through the brick chimney to the outside. Most women of the period knew of the black dust that lurked inside these metal tubes. So, during spring cleaning, the cold stove would have its chimney or vent removed. However, this left a gaping hole in the wall.

By the way, this wasn’t a rich or poor thing, most everyone had a wood, coal or gas stove installed when it was discovered how warm and efficient “modern” stoves were.

What was a decorative-minded Victorian or Edwardian to do? Well, someone came up with the idea of a thin, decorative, round disk to hang up over the hole, until the cold months returned and the stove pipe would again be installed.

You can find all kinds of designs for flue covers. Most, like yours, had thin metal frames and colorful artwork. Most of the artworks were from German or French printers. The sky was the limit on what they printed — children, babies, puppies and kittens were roaringly popular.

Condition is paramount as these were considered expendable and were not made with the highest degree of production. I see that yours has a little bit of staining around the edges. Not to worry, it’s not affecting the value too badly.

There was a time that these flue covers, with sweet illustrations, were selling for some really hefty money. Today if I had this flue cover in my store — and yes, I love the bug band too — it would be priced at about $25. Thanks for a great question and for sharing it with us.