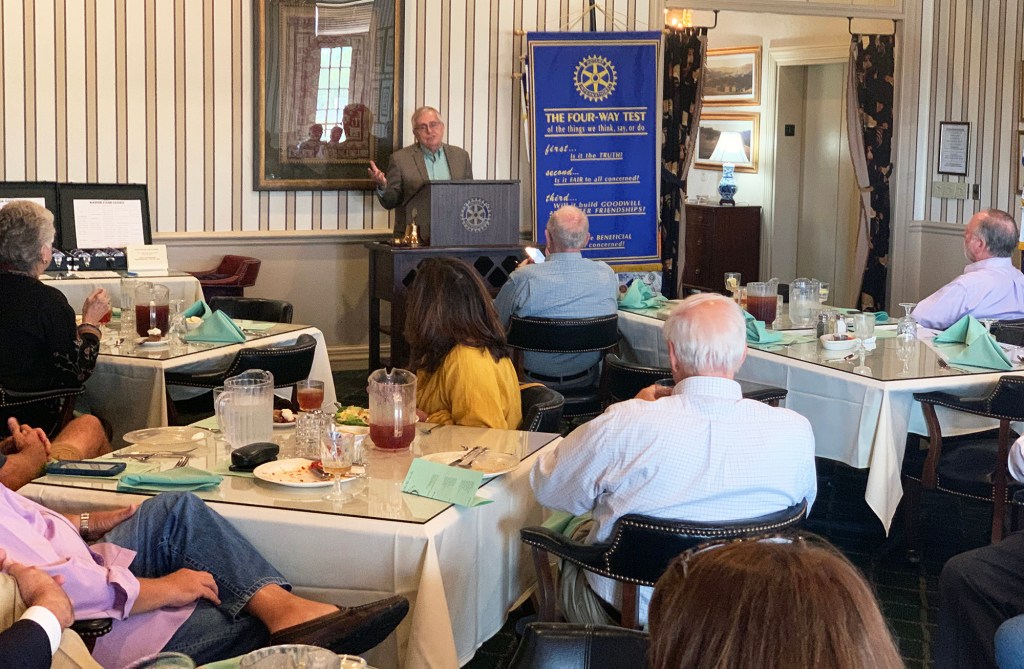 During National Newspaper Week, Al Cross, director of the Institute for Rural Journalism and Community Issues at the University of Kentucky, spoke to Danville Rotarians. The topic was journalism’s responsibility to be an independent arbiter of fact and a watchdog over public officials.

Cross’ current focus is on the “sustainability of local newspapers.” The decline in print advertising, which is less than half what it was 10 years ago, means newspapers have to get more money from their readers. That’s why people in Louisville and Lexington are now paying $65 a month to get the Courier Journal or Herald-Leader.

Eighteen hundred local papers have been shuttered since 2004.

The Institute for Rural Journalism and Community Issues was founded in 2004 with the idea that rural newspapers and other news media in rural areas needed help to get their arms around all the issues that affected rural areas. To address that need, the Institute publishes a daily blog covering trends, issues, ideas and journalism about rural America.

It also publishes Kentucky Health News, which gets health information out across Kentucky. The institute also publishes the Midway Messenger, an online newspaper. Most of the work is done by students of Cross’ UK classes.

Cross began his presentation by asserting that we live in a fractionalized media environment today. There are hundreds of internet and social media sources offering information created to confirm various viewpoints, so the public has a hard time differentiating between fact and opinion. Newspapers should be about facts, not opinions, and the facts must be verified — “It’s the essence of journalism.”

Years ago, when Cross wrote a front-page story for The Courier Journal, “at least five editors read it before it got into a paper.” Cross believes that civic responsibility needs several editors arguing among themselves about what is worthy of front page coverage and will stir readers to read it.

Today there are two people editing headlines for 20 different papers. A design studio in Louisville puts out papers covering Indiana cities from Annapolis to Greenville and Indianapolis. At one point, John Nelson, the previous editor of The Advocate-Messenger had a staff of 21; today the newsroom’s total staff is four.

The Institute for Rural Journalism has three students at UK covering the Kentucky governor’s race for the State Journal. Cross hopes to set up a Frankfort newsroom in January to cover what goes on with the legislature and perhaps the new administration.

Politics makes good news, but proper coverage requires lots of interviews to get a thorough and balanced assessment, backed with adequate facts checking.

Polls are inadequate because surveys generate a response bias and a non-response bias. Some people are inclined to respond to polls if they might drive the numbers in social media their preferred version. Other people don’t respond to polls because they think that’s part of the media establishment’s “fake news” reporting.

Cross ended his remarks by referencing “the biggest piece of money invested in journalism in this country by an individual in the last five years.” Walter Hussman, whose family owns 10 daily papers, along with magazines and cable television companies in six states, gave $25 million to his alma mater, the School of Journalism School at North Carolina’s Chapel Hill. He wants to emphasize the need for impartiality in journalism.

Hussman hopes his investment will help to restore faith in media at a time when 62% of Americans think news coverage is biased, according to a 2018 Gallup/Knight Foundation survey.

The business model of community newspapers must evolve if they are to survive. Cross believes it must include being respectful of the community’s opinions. He also feels that to be aware of those opinions, it is necessary to be out and about in the community. People will respect presenting a counterpoint if it’s accompanied by a credible opposing viewpoint for comparison.

“It’s bad business to be out of tune with your community. That’s what I teach.”