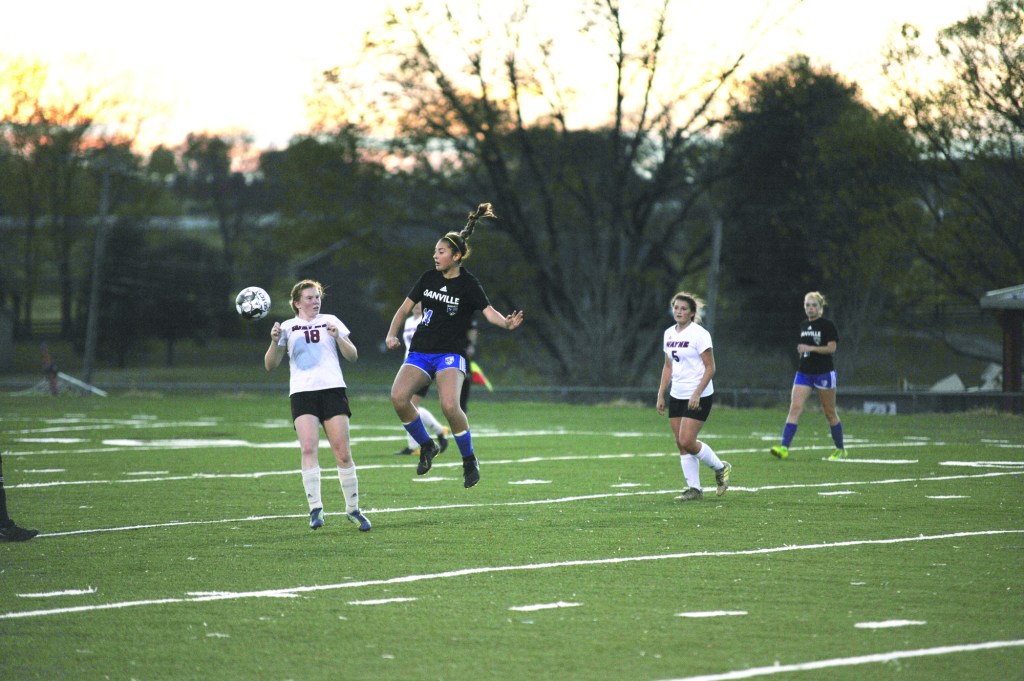 If all you saw of Danville’s Tuesday night victory over Wayne County in the first round of the regional was the 4-0 score, you might have thought that Danville cruised through the match, but coach JD Smith will be the first to tell you that his team had plenty of struggles on the pitch.

“I felt like we brought our pace down further than we’d like. We played a lot slower than we needed to,” he said. “As always, I want to push the girls and I want them to play their best at all times. I don’t necessarily feel like we played our absolute best tonight.”

The Lady Ads got on the board early, via a Karolyn Valko penalty kick after the Lady Cardinals had a handball in the box. The goal came two minutes into the match and would stand as the game winner.

But, like the Wayne County boys team did Monday night against Danville, the Cardinals played a compacted back line, forcing DHS to beat up to nine defenders to get to the keeper and it gave them fits.

“We don’t do the best job of breaking down that packed in defense. That’s something we knew we were going to have to deal with. We struggled trying to get it inside,” Smith said. “For all the struggles we had and found out there we still did enough to get the job done.”

Danville got another penalty kick in the 21st minute and this time it was Ella McKinney who put it in the back of the net on the left side to push the lead to 2-0.

It wouldn’t be until there was only five minutes remaining in the first half that Danville would score a goal in the natural flow of the offense when Valko got her second goal of the night. She came in from the right side of the field and put the ball past the keeper for the goal and the 3-0 lead.

That least would last until there was only four minutes remaining in the match when Natalie Fieberg played a beautiful ball from about 25 yards out near the left boundary that floated just out of reach of Wayne keeper Xaviea West for the goal.

Despite the struggles in pace and aggressiveness, Smith knows that this time of year is about surviving and advancing.

“Some nights it’s just about making sure you win,” he said. “And so to win and to get a shutout, that’s always good. We did enough things right to get the job done and that’s what you want at this time of year.”

In the second round, Danville faces the toughest challenge it will have seen this year so far. After West Jessamine defeated Pulaski County 9-0, the Colts stand in the way of the Lady Ads and the regional championship. West is three time defending regional champion, and in those three years, it’s won the state crown twice and made the final four last year. The Ads get the Colts in the late match Wednesday night in a meeting of district champions.

“Danville has some great athletes, and JD does a real good job with those girls,” West Jessamine coach Kevin Wright said. “I’m just looking forward to that matchup.”

The early match Wednesday night will be a battle of district runners up after both Garrard County and Mercer County won their games on Monday.

Garrard won its match over Southwestern in penalty kicks — the second consecutive match the Lady Lions have had that wasn’t settled in overtime. Hannah Day opened the scoring for Garrard off an assist from Marianna Cortes with 5:54 remaining in the first. Carrine Sounders answered with a free kick early in the second half.

Mercer County won in shutout fashion over Somerset, 3-0. Marlie Charles, Love Mays and Bella Garrett were the goal scorers for the Titans while Charles and Mays contributed assists.

The Lady Lions and Titans will face off in the semifinals at 6:30 p.m. on what is supposed to be a rainy Wednesday night.