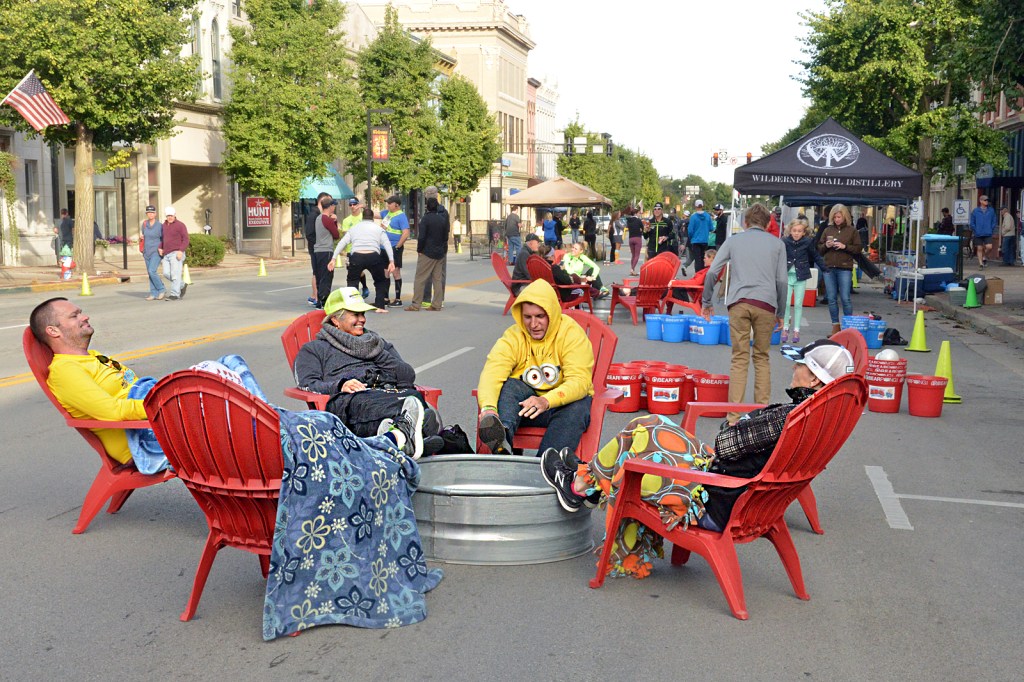 Ragnar team members rest and stay bundled up in chairs set up on Main Street during the 2018 Bourbon Chase. Team members come from California, Virginia, Michigan and Hawaii. (File photo by Robin Hart)

The 200-or-so-mile race across bourbon country is back, and Danville is planning a huge party to celebrate it. Bourbon Chase 2019 comes through town Friday, with festivities planned from about 5 until 10 p.m.

“Not just Danville, but also in Perryville, too,” says Jennifer Kirchner, executive director of the Convention and Visitors Bureau.

The Danville stop for runners, who begin at Jim Beam distillery, is Exchange 12 on the race, and it’s located at Weisiger Park, a designated refueling area for competitors. Kirchner says it’s actually the main exchange on the race course “because of the time and location. We’re geographically centered, so we see one of the biggest turnouts on the whole race course.”

Danville is also listed as Exchange 17, which means runners will be coming through until the wee hours of the morning.

There are some changes this year, something Kirchner is particularly hyped about.

“One of the things that’s different is Main Street will be closed from Constitution Square Park to Weisiger; that’s my dream festival layout,” she says. “We’re going to do it this time because, truly, the safety of the runners dictates that.”

The Bourbon Chase previously was a locally owned race, but after last year it was sold to Ragnar, a national company. Kirchner says they’ve really amped up the experience, too, as well as provided additional marketing help. The CVB is the point of contact, and each Main Street program is doing their own added activities, she says.

“It’s a different event in that typically, locals don’t come out for it. So we’re trying, with the Heart of Danville and Main Street Perryville, to add some interest to it.”

She says the Heart has “really turned it up a notch” this year; the barrel rolling event for runners will still be held, but now PowerPlay will perform at 303 W. Main Street from 6:30-9:30 p.m. at the former Cue restaurant, and Gypsy Run will be serving locally brewed beers.

The street closure of Main from Fourth to Second streets will offer runners a chance to play multiple games on their break, like Jenga and Giant Connect Four. Plenty of comfortable seating will be available so runners and supporters can enjoy craft cocktails from Wilderness Trail Distillery.

Constitution Square Historic Site will serve as a spot for relaxation and sleeping for runners, with bathrooms and parking available.

Back at Weisiger, there will be a DJ, and more open space to relax. Ephraim McDowell Regional Medical Center will also be set up to assist any runners in need, and water and bathrooms will be available.

“Something else that’s also fun, HAM Radio Club will be set up at Exchange 12 again, giving updates on which runners are about to arrive. They’re a neat group of people, and the crowd really enjoys them being there,” Kirchner says.

She says locals should start to see vans pulling in around 3 p.m. Friday, ahead of the runners.

“The fastest runners won’t get here before about 5:30 p.m., and they continue coming in until about 9,” Kirchner says. The festivities sort of naturally wind down with the flow or runners, with “peak action around 6-8:30.”

Danville High School will also offer a runners’ spot for hot coffee, drinks, snacks and bathrooms on Lexington Avenue. The cost is $5 per person, or $25 per van, and goes to support the Danville Admirals football team.

In Perryville, the Perryville Jamboree will be open, and MSP has set up other activities, such as live music and five different food trucks.

The Bourbon Chase always has a theme — this year, it’s Superheroes and Villains, so runners will be fun to watch. “We hope locals dress up, too,” Kirchner says, as this is the time for Danville to put its best face on.

“To me, it’s not a big local event, but you do have 8,000 captive people coming here, so it’s amazing for local businesses.” She says many of them say it’s their best night ever.

“They are all ecstatic about it. There will be extended seating in front of some of the places, and they’re going all out with specials and some businesses who haven’t traditionally stayed open will this year. Some are changing their menus to cater to the runners.”

Kirchner says there are two main goals to the event. “One is to support downtown businesses, and two is this is a group of people who like to travel and enjoy getting off the beaten path, and love the downtown. So put your best face on so we get these repeat visitors!”

She knows this is one of the results of the race. “People will come back to town to visit because of the experience they had during the Bourbon Chase. And we love that.”

“We want the vibe to be fun and family-friendly … to show off our beautiful downtown … We want them to feel welcomed to Danville, and see that we have an alive and thriving town.”

Duvall said he hopes many local residents turn out to support the chase. “If we have loads of friendly, welcoming residents, we will leave a mark on the Bourbon Chase participants.”

He says there will also be a free movie on Main Street, “Captain Marvel,” which will begin at 7:30 p.m.

“The race is great for local businesses because runners enjoy seeing what each community has to offer,” Duvall says. “Plus, they are hungry after running.”