Colts onslaught too much for Lady Ads 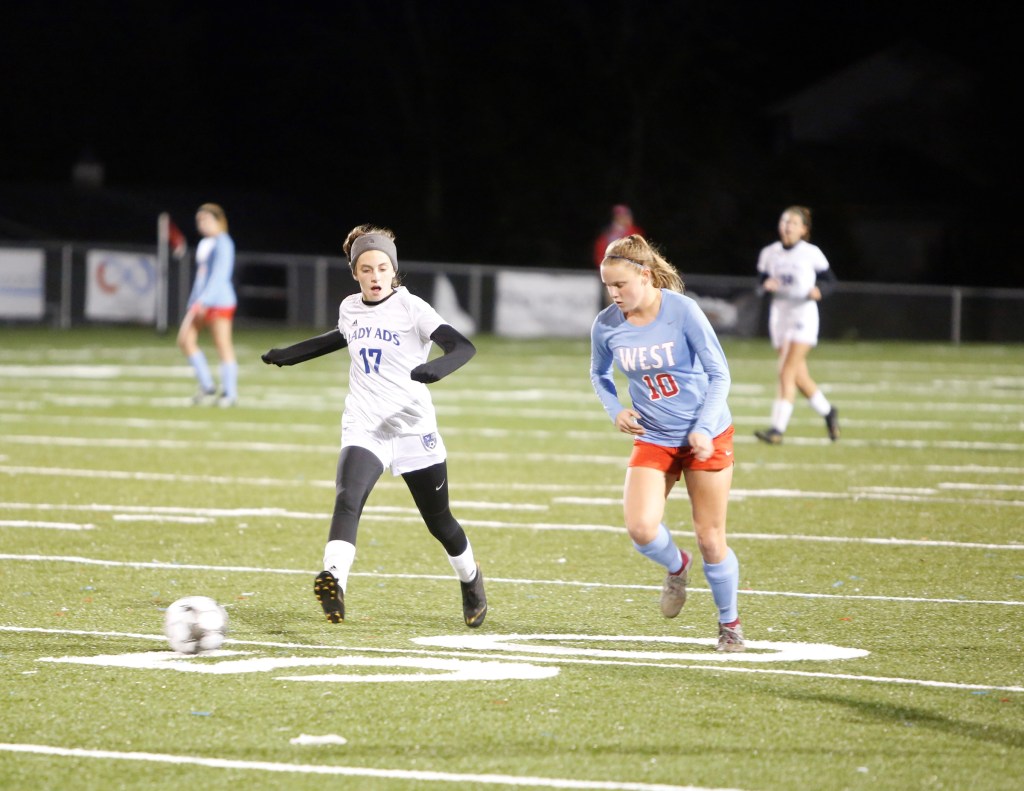 Lucy Kate Gibson (17) of Danville advances the ball before West Jessamine’s Mackenzie Turner (10) can reach her during the first half Wednesday. (Photo Mike Marsee)

Former boxing champion Mike Tyson famously said, “Everybody has a plan until they get punched in the mouth,” and that’s how it went for Danville on Wednesday night in the semifinals of the girls 12th Region Tournament.

The Admirals had overcome a good deal of adversity to reach the regional semifinals, but they couldn’t overcome the combination of West Jessamine’s attack and their own mistakes in an 8-1 defeat.

West Jessamine scored less than seven minutes into the game, then stretched its lead to 4-0 before halftime thanks to three goals that were inadvertently redirected into the net by Danville players.

“We had a decent game plan coming out,” Danville coach J.D. Smith said. “They got the early goal, and we followed it up with three own-goals. So at halftime it’s 4-0 and you’ve put three in your own net, and there goes the plan. So then it’s just work hard for what you get. I told the girls at halftime, ‘I just want effort,’ and they gave me effort. They worked hard.”

It was a point of pride, but it wasn’t enough to stop host West Jessamine from rolling into the regional final for the ninth consecutive year. The Colts, who have won three straight regional titles and eight in the past nine years, will face 46th District rival Mercer County for the title at 7 p.m. today.

The Colts ended the Admirals’ season for the fourth time in the past five years, all in the regional semifinals.

“It’s unfortunate, and that’s not the ending I wanted for the girls, but I’m still proud of their effort,” Smith said.

West Jessamine didn’t get its first shot until the 7th minute, but that one found the net as Mackenzie Tucker scored off a pass from Hailey Cole.

Caroline Absher and Sophie Bish were credited with goals in the 18th and 20th minutes to make it 3-0, and Audrey Henry got a goal in the 38th minute. All three of their shots, however, went into the net off Danville players.

West Jessamine led 7-0 in the 61st minute after second-half goals by Cole, Mary Grace Galus and Grace Osborne. Paige Peel capped the scoring for the Colts.

Sallee, one of three Danville seniors, scored her sixth goal of the season with 11:31 remaining.

Making an impact in the postseason was something of an achievement for Danville, which dealt with injuries throughout the season but won their first district championship since 2006.

“We played seven games this season with our full lineup, and our keeper broke her hand so she was out (for about a month),” Smith said. “So they’ve had to work hard and they’ve had to play through a lot of things that they normally wouldn’t have to. But they never gave up and they kept pushing and they had great attitudes, which is how they ended up here.”

The Admirals will return nine starters next season.

“And I’m sure that they’ll remember nights like tonight in the offseason and make sure they’re getting their touches in and getting their work done,” Smith said.