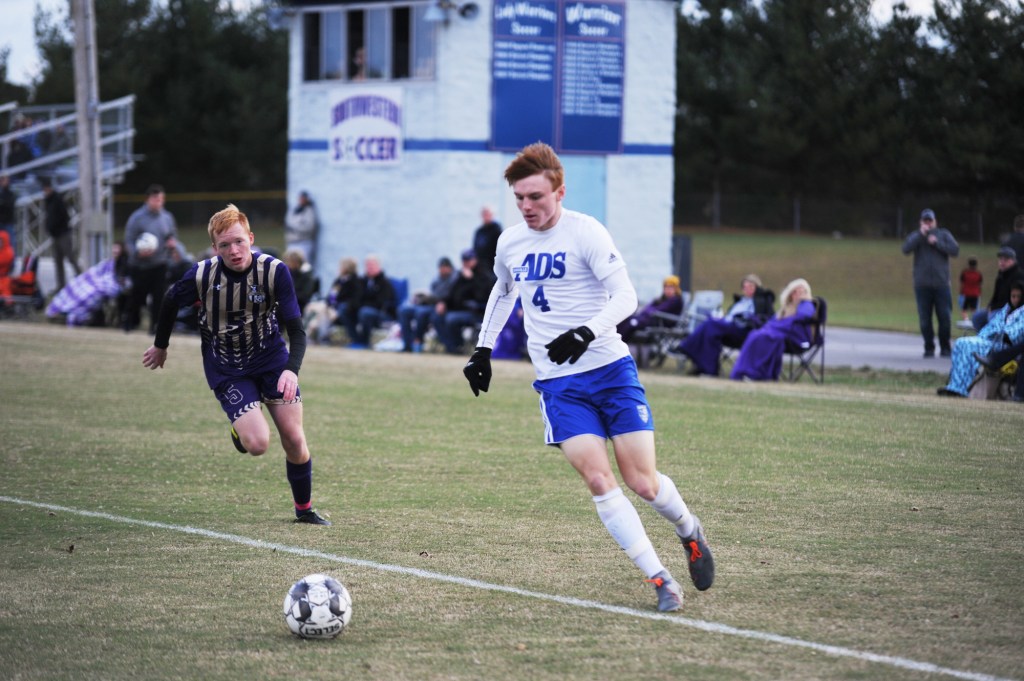 It didn’t take long for Danville to score the game winner in the regional semifinal matchup against rival Somerset.

Less than three minutes after the game started, Ethan Redmond battled for a ball on the end line with Logan Maynard. Maynard thought he had successfully earned a goal kick by shielding Redmond from getting the ball, but Redmond was able to just get his foot to it before it crossed the barrier. Once in possession, Redmond played a cross into the box for Briar Sanders who put it in the net for the only goal of the match. 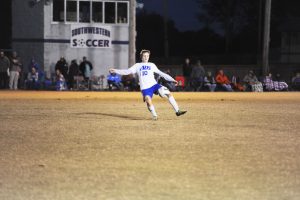 Briar Sanders got the game’s only goal three minutes into the match. (Photo Derek Brightwell)

“Gosh, if (Ethan) could do that three or four more times a game, those would pretty much be three or four goals always,” Danville coach Brent Beauman said about Redmond’s pass. “He’s done it before and people have been there and he’s not passing it. But he’s getting his head up and he’s looking. Because you get Briar or Gabe (Cisneros) standing in the six, they’re not going to miss that shot. We haven’t practiced it as much, but it used to be all we did was to the end line and bring it back.”

The rest of the match was a good, competitive match between two teams who have a tendency to get heated when on the pitch together. Hard tackles and strong challenges for the ball were typical of the match, but nothing crossed the line. As the final horn drew closer, the Briar Jumpers started to press a little harder, looking for the equalizer, but it never came.

“It’s such a weird game with Somerset. I don’t know where all of it comes in but they always play extremely hard and it’s a tough match,” Beauman said. “We would have liked to score a few more goals to make it a lot less nerve wracking, but I like the way we managed the game. Especially at the end, we had people get back and helping on defense. We were clearing it — all the things you need to do when you have a one goal lead with a few minutes left.”

Both teams had great looks at the net but failed to capitalize on them. Gabe Cisneros took a free kick that just missed the left post of the net halfway through the first. Derek Arias from Somerset got free on a breakaway but just missed right of the net.

In the 36th minute, Danville celebrated what it thought was its second goal of the match. Zachary Morgan put a shot from the box right on the keeper, who couldn’t coral it and it ricocheted to Keegyn Wilcher who fired it into the back of the net. But the goal was waved off as the side judge declared Wilcher offsides, much to the displeasure of the Admirals fans. 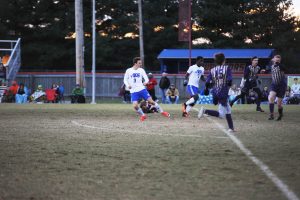 Zachary Morgan’s shot deflected off the Somerset keeper and onto the foot of Keegyn Wilcher who thought he had a goal, but was ruled offsides. (Photo Derek Brightwell)

Early in the second, Danville would be the beneficiary of the same call, when Somerset had a near goal wiped away because of an offsides.

For the final four minutes of the match, Somerset had to play a man down as senior forward Tommy Wobbles let his emotions get the best of him and earned a red card.

When the two teams met in the semifinals last year, a fight broke out on the sideline after hard contact was made and resulted in multiple ejections. That didn’t appear to be the case for Wobbles ejection — an incredulous coach Brian Blankenship asked “You’re going to eject him for that?” after being told the reason — Beauman believes that last year’s fray was on the mind of both teams.

“It was a good game. Everybody’s playing hard and trying hard. I think that was in a lot of people’s heads. It was there — sort of the elephant in the room or whatever,” he said. “But I don’t think — they didn’t do anything and we didn’t do anything. It was just high school boys playing the game.”

In the finals, Danville gets West Jessamine who shutout defending champion Somerset for a 5-0 win. The two teams met for the second game of the season, with the Colts scoring a 3-1 victory over the Admirals. It was in that game that Danville lost Sam Brunner for the year with a leg injury and is the Ads’ only regional loss of the year.

“It’s regional finals so it’ll be a good game,” Beauman said. “It’s all about being the regional champion. It doesn’t matter who we’re playing, we’re just going to go out and play our game. If we do that, we’ve got a good shot.”