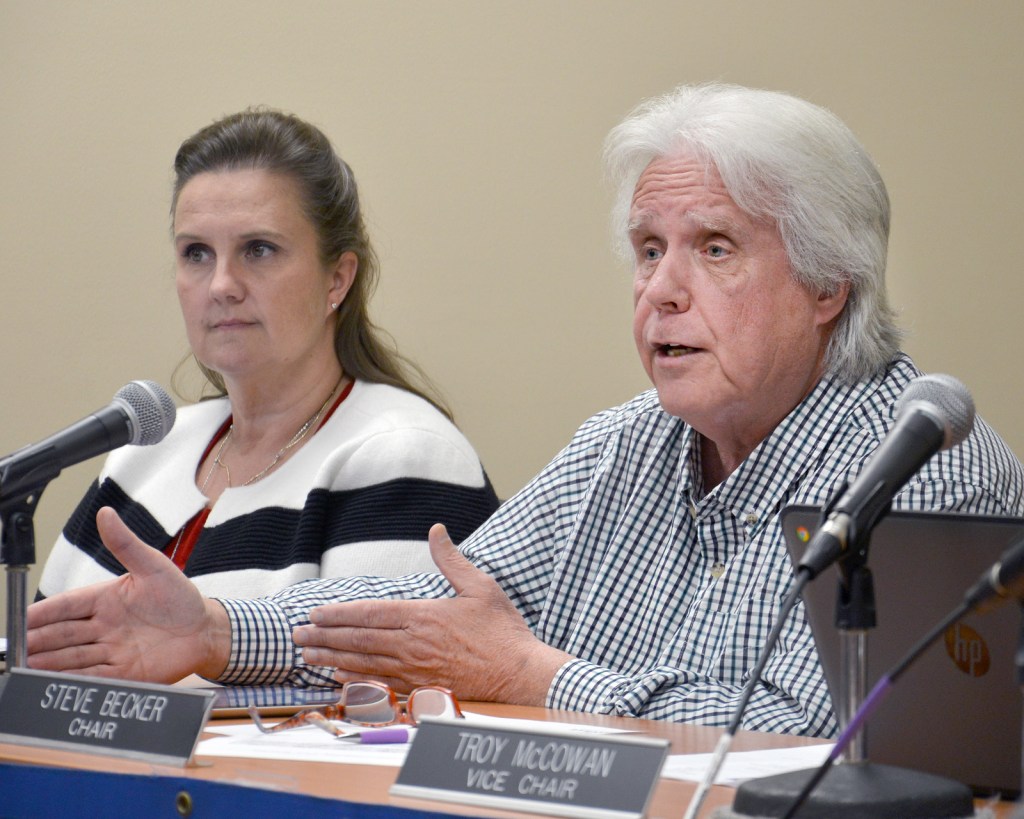 Danville School Board Chair Steve Becker talks about how the site based councils are responsible for improving their school's academic performance. (Photo by Robin Hart)

The Danville school board believes some of the responsibility for the district’s recent low scores in many categories on “school report cards” from the Kentucky Department of Education rests on the shoulders of each school’s local council.

“The site-based councils — if you look at your roles, you guys are in charge of improvement, not the school board,” said board Chair Steve Becker during Monday night’s working session, when many of the site based council members were present to be recognized by the board later in the meeting.

“We pay the bills. We write the policies. We try to make sure that everything is on an even keel. But it comes down to the site-based councils,” Becker said. “We’ve got to have you guys get serious and realize we can’t stay on the same path.”

Board member Lori Finke said she echoed Becker’s opinion. “We can only do so much here, but it’s up to you all to really push. And when you get push back from people in your schools when you’re making changes,” because things have been done the same way for several years, “you all have got to stand behind your school and say, ‘Let’s try something.’ I will support you.”

During Becker’s emotional statement addressing the low scores, he said he had four “distinct” conversations with the public.

Someone told him the disappointing scores were what they had expected. “That hurt me. That hit me like a ton of bricks.”

“Trying to explain what this is all about is really difficult because the public perception is, is what’s printed in the paper,” he said.

The district’s low ratings don’t show all of the positive programs within the schools, he added.

“I’m trying to let everybody know here, especially our site-based folks, that your board members take the hits.”

A second conversation that Becker described was when someone asked, “Is it just our kids in Danville just aren’t that smart? It just seems to be a constant thing that we never seem to rise above. We can’t even get to proficient.”

A third conversation was with a couple who were moving from Burgin to Boyle County so their children could attend school in the county district. They looked at academics and taxes when making their decision, Becker said. They said “Academics were better across the street and had much lower taxes.” It was a good “return on their investment. She was pretty blunt about it.” Becker said.

“I don’t want to equate taxes with how kids perform. That is the perception. When the board raised taxes, that kind of put the knife in the back — pouring more money into the same system. What is going to change?”

The fourth conversation Becker talked about was one with an economist who had seen the Danville district’s ratings.

“The health of your school system determines the future of your community,” Becker said the economist told him. “Eventually if we’re not performing well as a district, it will also mean that our city will also start feeling the affects of that.”

Becker looked at the crowd and said, “I hate to be brutally honest about it, but we can no longer say, ‘Well, these (state assessment tests) get in my way and it hampers my teaching.’ ..Well, I’m going to make a comment here and probably going to make some people mad. If the teaching that you’re talking about was so innovative, then why were the scores where they are?”

“Why can’t we do both?” Becker asked. “Why can’t we figure out how to get to state proficiency and still be an innovative person or teacher? Because I know you can do both.”

Assistant Superintendent Sheri Satterly, who had given the board a detailed review of the test scores, said, “We are teaching standards,” and not just for the state testing. “Innovation is what happens in the classroom.”

In all of her years of experience, Satterly said she had never seen a separation between assessment and innovation. “It’s what you do with the standards in your classroom.”

She agreed that teachers could be innovative when teaching the state-required standards.

“We have to teach grade-level standards to grade-level students in order to prepare them for the next level. And if we’re doing that, then the goal is eventually the test scores will start to see a positive trend.”

“In my heart, I’m really disappointed because I believe in this school system so much,” Becker said. “We need everybody in this room to be a partner. … We have a really great school system. We have caring, wonderful people. … I’m just saying that there’s something that we’re missing collectively, that only all of us can fix. … We do have the right people in place. The teams are there. … We are going to get to the end of all of this.”