Mercer gets another shot at West Jessamine 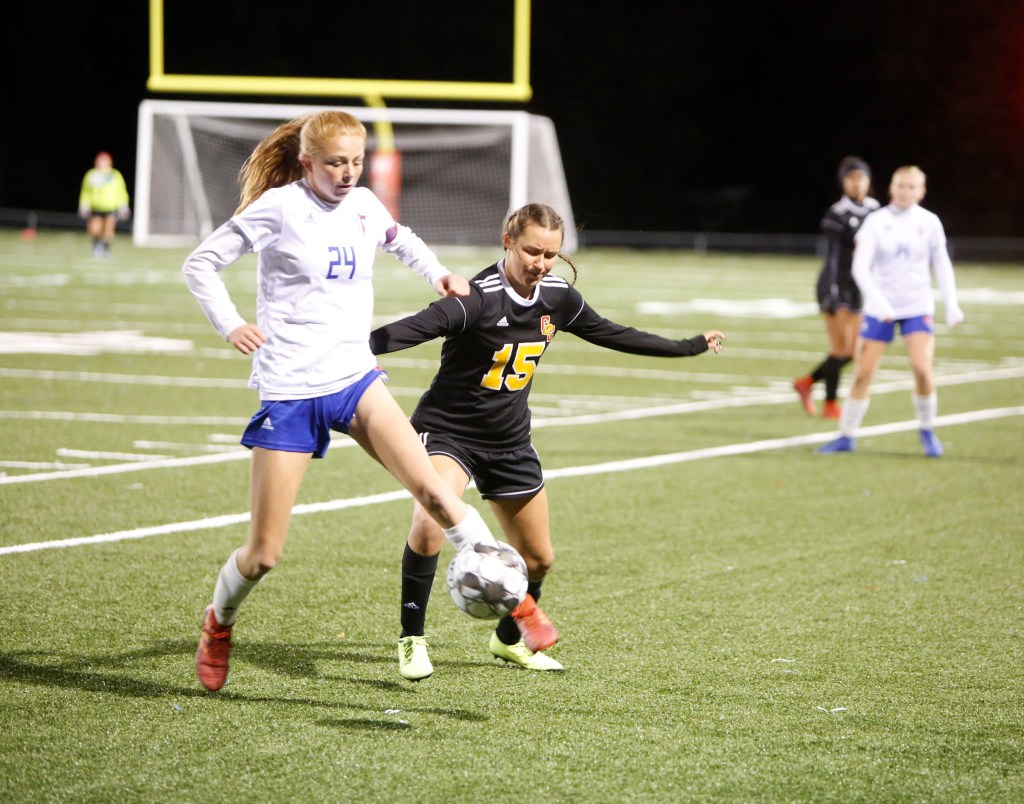 Abby Dean of Mercer County plays the ball as Garrard County’s Madisyn Neeley defends her during the second half Wednesday. (Photo Mike Marsee)

NICHOLASVILLE – Mercer County is ready to take another swing at the region’s soccer top team.

The Titans advanced to the championship game of the girls 12th Region Tournament with a 2-0 victory over Garrard County on Wednesday night at West Jessamine.

Mercer’s defense gave Garrard few chances to extend its best season ever, holding the Golden Lions to just two shots. Goals by Abby Dean early in the game and Abby Rogers late propelled the Titans into the regional final for the second time in three years.

Mercer missed last year’s regional after losing to West Jessamine in the 2017 title game, and coach Josh Culver said the Titans have been preparing for this opportunity all season.

“We’ve played a tough schedule. We did that on purpose this year in order to get our girls ready for this level of play. When you’ve got West Jessamine in your district it’s tough, and you have to play up in order to prepare yourself,” Culver said. “We’ve dealt with a lot of injuries, and our girls have been working their tails off to get back to where they need to be.”

To get to the title game, Mercer (13-7-1) had to get past Garrard (15-5), which had played and won the first regional tournament game in school history only two nights earlier.

The Titans did so by preventing the Lions from executing the counter plays they needed to turn the tide in a game that was played largely on one half of the field. Virtually every Garrard player who broke free with the ball was met by three or four defenders, and the Lions never got a shot on goal and were outshot 25-2 overall.

“Our defense has been pretty solid all year,” Culver said. “We’ve got a lot of speed, a lot of control. They don’t panic, they look to control the ball, play part of the offense and get up and help out, and they did a good job of containing them tonight.”

Garrard’s goal on defense was to keep Mercer’s attack near the sidelines.

“The game plan was pretty simple,” Garrard coach Brett Deshon said. “They’ve got a lot of individual talent. They’re a good team. We knew that. When they had the ball, if they wanted to play around with it on the … outside of the pitch, that’s fine. That’s not an issue for us. We’re going to defend the middle, we’re going to shift together, we’re going to make life difficult. We’re going to try to get in between passes, cut off anything they want to do.”

“I thought we did a really good job of moving the ball around on offense, especially in the final third,” Mercer’s Culver said. “But hats off to Garrard for the type of defense they played. They stacked it in tight, even the strikers. They packed it in and really made it hard for us to get any shots off.”

Mercer got the only goal it would when Dean scored in the 9th minute by following a teammate’s attempt to shoot from close range and punching a loose ball into an open net.

Garrard goalkeeper Vanessa Hume saved five shots in the first half to keep her team in the game – she had six saves in all – and the score remained at 1-0 deep into the second half.

What was likely the Lions’ best scoring chance came in the 72nd minute when Marianna Cortes appeared to have only one Mercer defender to beat to get off a one-on-one shot, but another defender came from the opposite side to break up the play.

Seconds later, Rogers headed Dean’s corner kick into the net to make it 2-0 with 8:12 remaining.

That effectively brought the curtain down on a magical season for Garrard, which had won only one district tournament game and had never been to the regional before this season.

“They’ve changed Garrard soccer forever, and they’ll never be forgotten for that,” Deshon said. “They’ve done so many things that have changed (the program). We haven’t been relevant until the last two years or so.”

Garrard fought through a number injuries to set a school record for victories, along the way defeating several teams they had never beaten before.  and raise the bar for future teams. The Lions will lose about three starters to graduation, and Deshon said this team has raised the bar for the players who return and younger girls who will join the program.

“There’s girls coming to me every day asking, ‘How can I get involved with this? How can I be involved with soccer?’ And I say, ‘Just come out and be dedicated,’” he said. “We feel good about next year. We’re going to plan on being back.”

Mercer will be back at West Jessamine for the title game tonight. The Titans lost 3-0 and 4-1 to the Colts during the regular season, but Culver said they’re confident.

“They’re ready,” Culver said. “We play West, it seems like two, three, four times a year some years. We know their style of play, and they don’t change from it. We’ve talked about it, we’ve practiced for it, and hopefully they’re ready to come out tomorrow night and battle. That’s all I’m asking.”