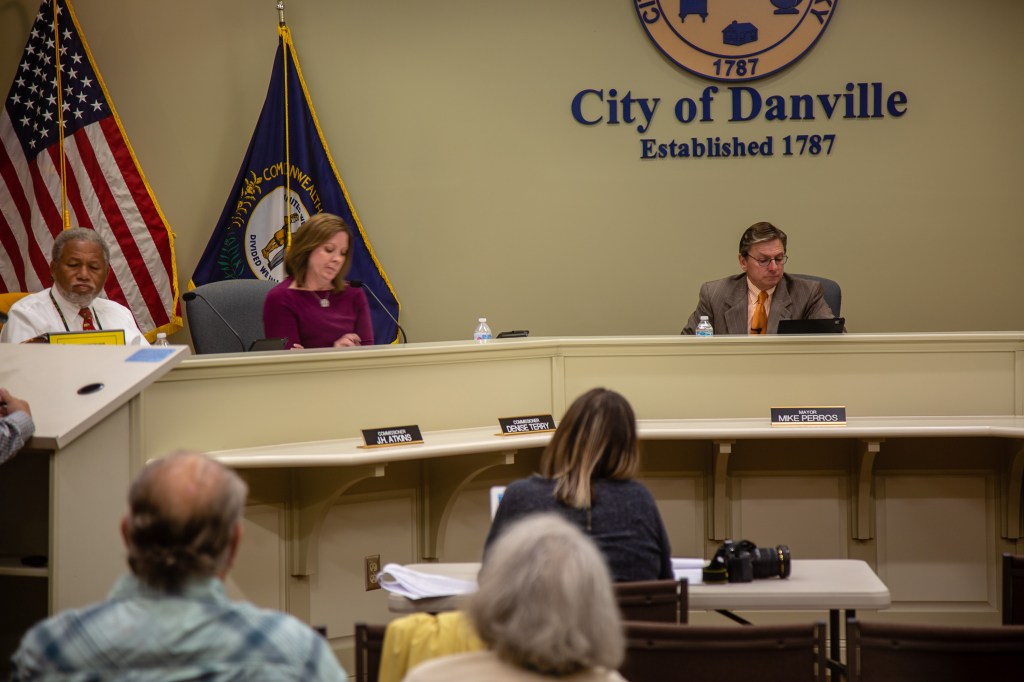 Danville Mayor Mike Perros, right, participates in a workshop meeting about a proposed zoning ordinance amendment Monday evening, while a handful of protesters called for him to step down outside city hall. (Photo by Ben Kleppinger)

Some citizens who took to the podium to speak during Monday night’s Danville City Commission meeting were steadfast that a grievance against Mayor Mike Perros is a diversity issue, but others had different takes on the situation.

Perros has been under fire for a grievance lodged against him by a city employee for making comments about her appearance to new employees. The situation drew a lot of attention for the way it was handled, with the city claiming the mayor was not acting in his official capacity at the time he made the comments, while inside city hall signing checks.

The grievance has resulted in the scheduling of diversity training for the city’s elected officials this week.

‘It’s not black or white; it’s wrong or right’

The meeting was a packed house, but just six citizens spoke about their problems with the mayor. Before the regular meeting began, around 4:30 p.m., about five people demonstrated in front of city hall, holding up signs with messages like, “Get rid of Perros.”

As the meeting began, the room was crowded and energetic, but citizens waited patiently to get their three minutes during the open-ended “hear the public” agenda item. Just before the comments began, Perros said he was recusing himself as mayor for the agenda item, allowing Commissioner J.H. Atkins, mayor pro tem, to lead.

Cheryl Burton, an organizer of the protest group, said what’s happened with the mayor involving the employee who filed the grievance, Joyce Collins, and a separate incident involving tourism director Jennifer Kirchner “is very hurtful.”

Perros was involved with Magistrate Phil Sammons in a joke that went wrong involving Kirchner’s appearance during a past Boyle County Fiscal Court meeting. Collins filed her grievance because she said Perros told two new employees she wears wigs and made comments about her skin being darker than theirs.

Burton went on to ask why there have not been any repercussions for Perros’ actions.

“… If Mr. Atkins had done it to a white female, I’m sure his job would be gone because he’s a black male. That’s how the black people perceive this,” Burton said.

She then spoke directly to Perros, telling him there are city employees “who I have emails from and who I have talked to who are afraid to come out and speak out against you for fear of retaliation.”

Burton told Perros if there is another side to the story, “then you need to tell it. Speak up … What’s going to come out next about you, Mike? How many other women have you offended?”

The commission allows citizens to speak on any topic they’d like during the second of two “hear the public” agenda items, as long as it’s not on the commission’s agenda, but often makes a practice of not responding to the speakers. Burton was not happy about this, and told Perros he can “sit there and look at me with that little snicker on your face …” and told Commissioner Denise Terry that “as a woman, you should’ve spoken up.”

Burton said the commission needed to let citizens know what the repercussions will be for the mayor, and again said, “if Mr. Atkins had done this, and said it to a white woman …”

Resident Alonzo (Lonnie) McGuire had a different take on the situation. “It’s not a black or white issue. It’s a wrong or right issue,” he said, to many “amens” from the crowd. “So we’re going to leave the black or white out of it, please.”

McGuire asked the men in the room to think about how they’d feel if similar comments were made to their wives, mothers or daughters.

“As a man in his position, it’s making Danville look bad, period. Take the color of everyone out of it, consider it, and no matter who he said it to, it’s wrong — period. Either he doesn’t care or he knows nothing will be done about it. He’s older than me; he knew what he said was wrong, he just didn’t care about saying it.”

McGuire received a round of applause when he returned to his seat.

Resident Lanier Bowman simply asked Atkins, “What you think about what (Perros) said to Joyce Collins?”

Atkins began to respond, and said he personally went to Collins to discuss it. “I didn’t ask you that, I said what do you think about what he said to Joyce Collins? Do you think it’s wrong?” she asked.

Atkins said yes, “I think it’s inappropriate.” Bowman then went down the row of commissioners, asking, “Do you think it was wrong? Do you?” They all nodded or said “yes.”

“Well he needs to go, simple as that,” she said, to applause.

Resident Michael Mingey said as much as people are saying the whole incident is based on race, he thinks it’s more about professionalism. Mingey, who is Asian, doesn’t agree with recent assertions that some in the black community have made about not seeing anyone who looks like them working in city hall.

“You can’t just walk into a building and say there’s no black people in here, or there’s no Asian people in here …” Mingey said. Some in the crowd spoke out; “He just doesn’t get it,” one person said.

Elaine Wilson-Reddy told the crowd that for full disclosure, “I’m married to Commissioner (Kevin) Caudill,” before she began. She said according to the city’s personnel policy, “prohibited conduct by city policy includes but is not limited to innuendo, jokes, disparaging remarks.” She said the policy also defines “retaliation as conduct that dissuades a reasonable worker from making or supporting a charge or complaint of harrassment or discrimination, and it is prohibited.”

Wilson-Reddy then listed many of the comments Perros is alleged to have made. “‘You can’t be the new Joyce because you don’t wear wigs and your skin’s not as dark as hers. These are the city’s cafeteria girls. She’s not wearing socks …’”

Then, she said another city employee had given her permission to use another comment, as long as her name wasn’t used.

“‘I hear so-and-so has her panties in a wad again; she won’t get a raise as long as I’m here,’” Wilson-Reddy said. “These comments by MIke Perros to women about women, to some city employees or professionals who have a relationship with this city, are comments in a pattern of behavior that creates a toxic culture for female employees in city hall. These are the comments we know about.”

She then called the commission out for deeming that Perros was speaking as a private citizen in the Collins incident.