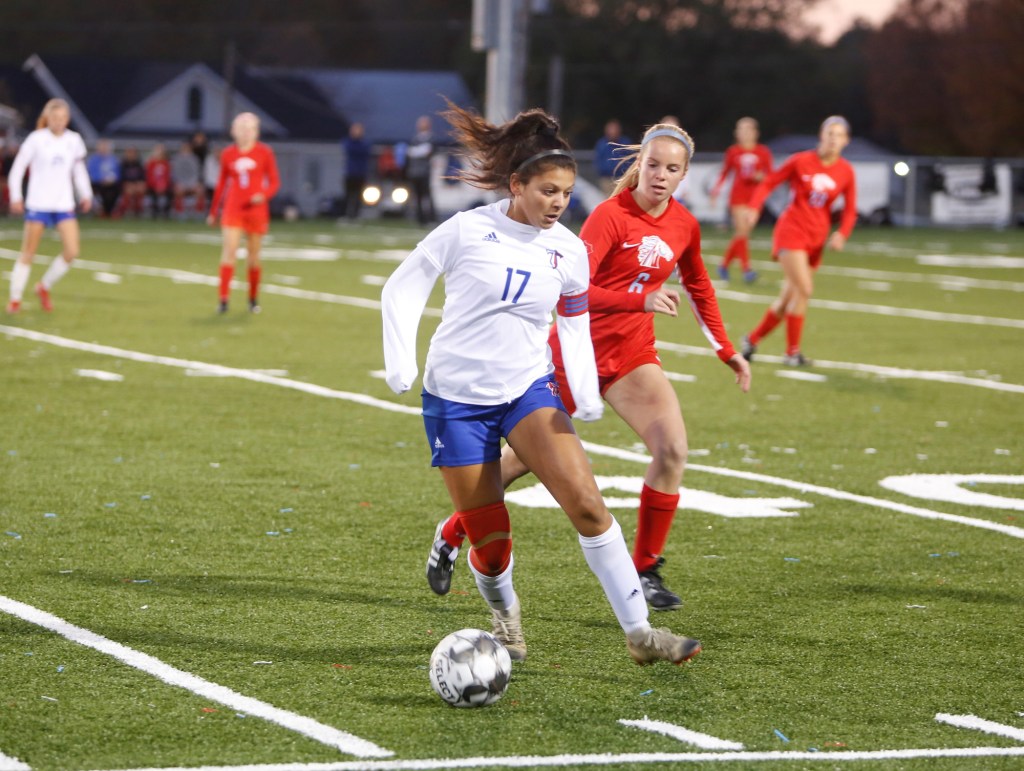 Bella Garrett (17) of Mercer County controls the ball as Caroline Absher of West Jessamine closes in during the first half Thursday. (Photo Mike Marsee)

NICHOLASVILLE – The Mercer County girls were going down swinging.

The Titans and their coach knew perhaps as well as anyone how tall a task they faced when they lined up against West Jessamine for the 12th Region championship. After all, they had faced the Colts three times this season and lost them all.

They took the fight to West Jessamine on Thursday night in hopes of generating an early goal that might lead to a different outcome. The result was the same, however, as Mercer fell 4-0 in its second appearance in the regional final in three years.

“I told our girls that I was unleashing the dogs tonight, and we were just going to go down swinging and fighting,” Culver said.

That meant putting pressure on West Jessamine right from the start. Mercer was aggressive from the outset, but three first-half goals took the wind out of the Titans’ sails and propelled West Jessamine to its fourth consecutive regional title.

The first four minutes or so of the game were played on Mercer’s offensive end, but host West Jessamine controlled the ball for most of the rest of it.

Wright said it was critical for the Colts to weather the storm in the early going.

“That’s the key. You’ve got to start strong,” Wright said. “You’ve played them four times and they kind of know you.”

West Jessamine’s Mackenzie Turner had her third hat trick of the season against Mercer. She scored in the 28th, 39th and 73rd minutes, giving her 36 goals on the season and 11 in four games against the Titans.

Caroline Absher opened the scoring for the Colts, who have appeared in nine straight regional title games and won eight of them, when she got behind the defense for a goal in the 7th minute.

Bella Garrett got a shot on goal for Mercer about seven minutes later – she had two of the Titans’ three – but it was stopped by West Jessamine’s Anna Rexford.

Culver said the Titans, who will lose only three seniors, will learn from this game as they learned from those.

“We’ll learn from it, we’ll move forward and we’re ready to work in the offseason and ready to get going,” he said. “I’m already thinking about graduating seniors and what’s coming up and how can we improve from there.”

“They’ve got a nice club,” Wright said. “They’ve got a lot of young kids that are going to come back. Josh does a good job there.”

This was the second trip to the regional finals in three years for Mercer, which missed the regional tournament last season. Culver said he’ll remember this team for the way the players approached the game.

“They’re just full of joy all the time. They’re always in a great mood, they’re happy, they’re always positive with one another,” he said. “I just absolutely love how much they are about the team. If you look at our stats and you look at how everybody’s involved, it’s not about one player, it’s not about two players, it’s everybody. I’m proud that it’s just a team effort day in and day out with this group.”