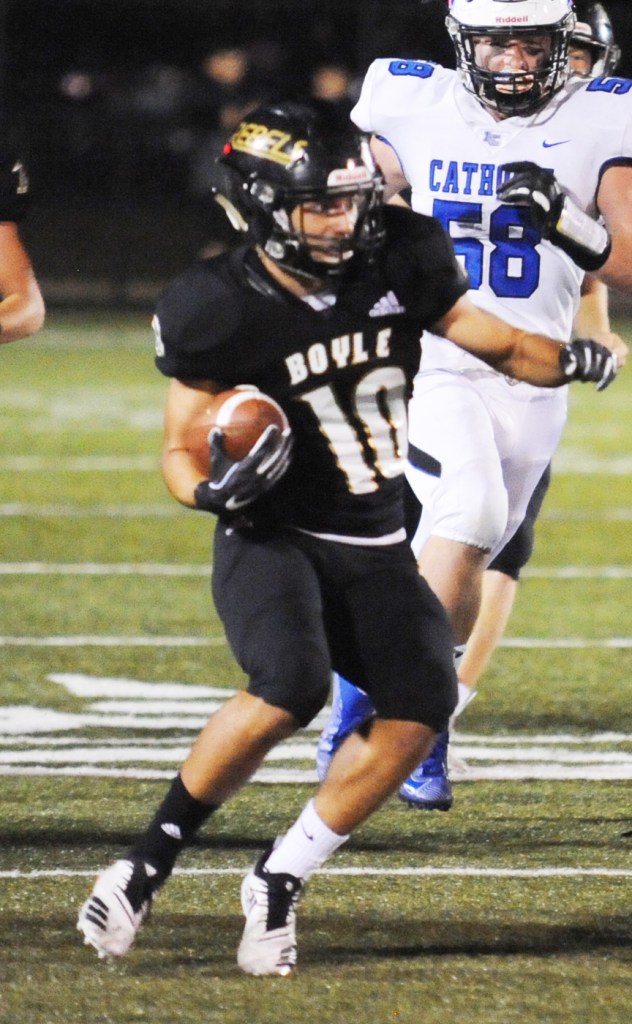 The Boyle County Rebels have had about as good a season as a coach could ask for. Possessing both the high scoring offense and the stingiest defense in 4A has led Chuck Smith’s team to a 7-0 record and the biggest scoring margin in the state.

But Smith isn’t ready to let up and rest on the success of the first seven games. And all he has to do is point to last season if he feels that his team is taking its foot off the gas.

“I think last year when we got to this part of the season, we kind of struggled a bit to find that motivation,” he said. “I hope our guys — and I’ve talked to them about learning from those mistakes that we made last year and not making them again this year.”

This week, the challenge is at Anderson County (4-3).

The Bearcats bring to the table a rushing attack that gained over 1,200 yards while only surrendering just under 790. That backfield is led by Zach Labhart who’s gained 698 yards and seven scores on 112 carries. Quarterback Jagger Gillis also has contributed seven rushing touchdowns this season.

Anderson likes to use Gillis’ running ability with a triple option attack. Discipline has been something coach Smith has been preaching to his defense all year, and it’s required to stop the option.

“I think that’s really important because when you play a team that runs the triple option like that, it’s all about discipline and taking care of your responsibilities,” Smith said. “They’ll do it out of multiple formations and give you different looks to try to confuse you. I think it’s really important that we’re being smart on defense and taking care of our responsibilities.”

On the offensive side of the ball, the Rebels are operating on all cylinders and it was fully on display in last week’s blowout victory of Lexington Catholic.

Quarterback Reed Lanter threw for almost 500 yards and five touchdowns. Three of those scores and 275 of those yards fell into the hands of Reese Smith. But beyond those big names, the Rebels are getting contributions from everyone in the huddle.

“Our offense was really on point this last game. We need to continue to do that to have the success that we want to have,” coach Smith said about the LexCath win. “Gray Rahbany has stuck out and made some big plays. Reilly Colwick has made big plays. Cameron Yates has had a great season so far and Cole Lanter has done a really nice job. And then of course Reese Smith who’s been having a phenomenal year. Our backfield — Will McDaniel has ran the ball really good and so has Andrew Sacco. Our offensive line has really come together and are getting better every single week.”

Sacco in particular stuck out last week. Every run he seemed to bounce off the first and second tackler, and always fell forward when he was tackled. “He’s a second and third effort type of guy and that’s what I like about him. He’s just 100 miles per hour all the time,” Smith said.

Currently, three 4A teams are undefeated — Franklin County and Johnson Central join Boyle in the ranks of the unbeaten. While obviously every team wants to win all of their games, Smith pointed out that changing in the playoff structure means every game is vital to his team.

“They need to understand that the structure of the playoff system is completely different than it was last year and in years past. If you want to play at home, you’ve got to have a high ranking. In order to get the ranking, you’ve got to be able to win ball games,” he said. “If you don’t — there are teams in 4A that are going to continue to win. Johnson Central and Franklin County are going to keep winning. So if we want to play at home, we need to do the same.”

The Rebels will try to continue winning ball games at Anderson County at 7:30 p.m.