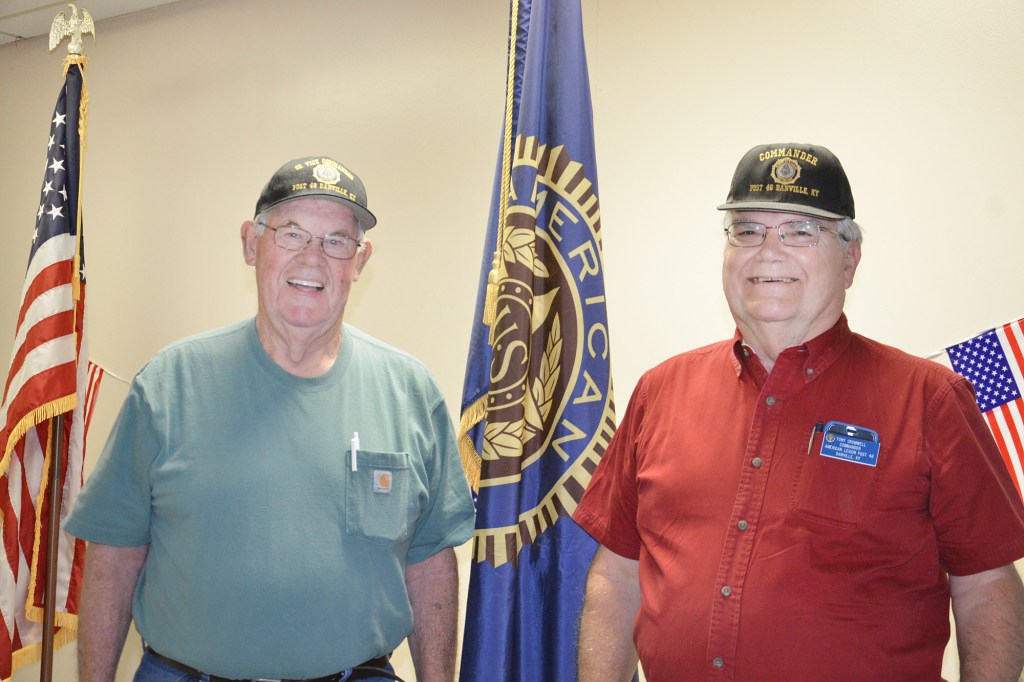 Photo by Robin Hart/robin.hart@amnews.com American Legion Post 46 in Boyle County is celebrating its 100th anniversary on Saturday, From left, member Earl Belcher, and Post 46 Commander Tony Cromwell will be at a booth at Kroger tomorrow, along with the post's ham radio club to share information about the organization from 9 a.m. to 4 p.m.

On Oct. 22, 1919, 15 World War I veterans in Boyle County became charter members of the American Legion Post 46. On Saturday, current Post 46 members will be publicly celebrating the organization’s 100th anniversary with a special display of mementos and informational pamphlets, and the post’s WRARC ham radio club will be broadcasting the event to the entire world at Danville’s Kroger from 9 a.m. to 4 p.m.

Post 46 Junior Vice Commander Gina Carney will be on hand to explain how she works with five school districts to find high school students to be accepted into the American Legion Kentucky Girls and Boys State leadership camps. She will also be available to talk with other female veterans about joining Post 46.

Today’s American Legion is much more than what some believe is just a social club for older veterans, said Post Commander Tony Cromwel.

The Legion financially supports local organizations such as the Salvation Army, Red Cross and Thomson-Hood Veterans Center, Cromwell said. They also donate to the fire department’s local toy drive during the holidays and buy calendars from the Boyle County Sheriff’s Office to distribute throughout the community.

“We donate heavily to Heritage Hospice because they sponsor the Veterans Day celebration in November. We try to donate as much as we can to them,” said Legion member Earl Belcher.

As members of Post 46 are aging, they are hoping to attract younger members to their ranks so it can continue being a productive asset to the community, Cromwell said. “The Legion has an image of older veterans, and there are a lot of World War II and Korean War veterans. Younger veterans don’t really identify with those folks,” he explained.

But the post is constantly trying to get out into the public and “tying with other activities, like the radio club, and serving the community to get the younger folks involved,” Cromwell said.

Even though the American Legion Post 46 has more than 300 members, including those in the other classes of memberships such as the Ladies Auxiliary, Sons of the American Legion and Associates, very few actually attend the monthly meetings, Cromwell said. And the Auxiliary and Sons squadrons are currently inactive because no one has stepped up into the leadership roles, Belcher said. “The younger group — they all have jobs and families and they find it hard to devote time toward helping the Legion.”

The associate members aren’t American Legion members, Cromwell said. They are members of the Post.

“We have a group of folks who believe in the Legion and what we do to help support the community. … They want to help and be a part of it, and they’re our biggest helpers. Without these folks we’d be in trouble.”

To raise money for the Post’s expenses and charitable donations, they don’t have big fund-raisers, Cromwell said. They are usually “in-house” events. One year the auxiliary auctioned off a motorcycle which allowed the post to buy a new heating system.

Other events they regularly have are Karaoke nights, chili cookoffs and raffles. “If somebody wants to part with a gun, we’ll raffle it off during meetings,” Cromwell said.

The most popular post events are the Sunday cornhole tournaments, Cromwell said. “The more activities we have, the more money we can make,” he added.

Cromwell said he wants Post 46 to “advance its standing in the community … and to support our veterans.”

For more information about Post 46, visit kypost46.org or email kypost46@gmail.com.

American Legion Post 46 and its ham radio club will be at Kroger in Danville from 9 a.m. to 4 p.m. on Saturday, Oct. 19, to publicly celebrate its 100th anniversary.

The radio club has a special 10-day call sign issued by the FCC in honor of the anniversary. WFL, Working For Legionnaires, will be used by radio operators to spread the word across the world.