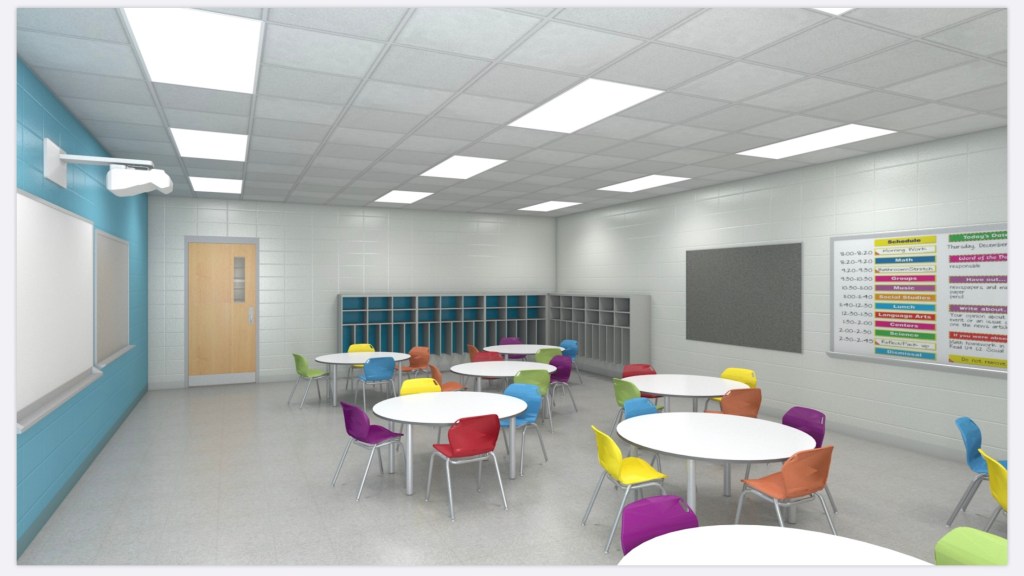 The final plans for the renovation of Boyle County Middle School to serve as the new Woodlawn Elementary were unanimously approved Thursday night by the board of education. The cost stands at about $3.4 million.

Boyle is in the process of completing a new middle school and access road, as well. 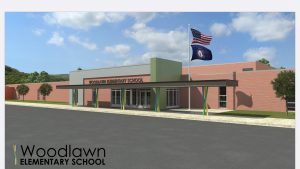 Bradley Beatty with Clotfelter Samokar architects walked Boyle County Board of Education through the finalized look of Woodlawn. He said the “bones of the building are good,” due to being well-maintained, and “the mechanicals are all still there. For me, it’s been fun — it’s about going in and making it an elementary school now. Adding the fun and the color …”

He said the project will only be adding about 350 square feet of new area to the building.

Up until now, the board had only seen renderings of the exterior facade, including changes to the front entrance, like a secure vestibule and a canopy near the bus area, which he says “gives it a landmark of its own — you’re arriving at Woodlawn.” 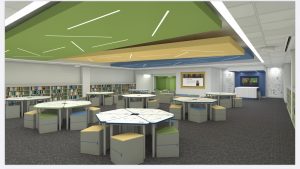 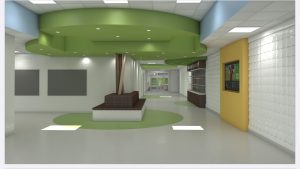 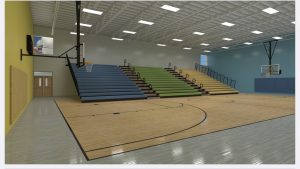 Due to the school’s request, a new, “single directional” parent pick-up line will be out front that runs around the building, crosses and goes back out, allowing the movement of buses from the middle school around to Woodlawn without crossing traffic.

The preschool playground will be outside those classroom areas, and the firm sought a waiver, with the board’s approval, from the Kentucky Department of Education (KDE) in order not to include a “direct connection” to the playground. “We’re utilizing the connection that is already existing, it just saves money” and didn’t make sense to create an additional door that would be another security breaching point, he said.

A large, paved area will also be included — something Beatty said the school asked for, to serve as a gathering space for parents during pick-up, but would also serve as a “learning space,” for teachers to have class outside.

A large playground will have a sloped sidewalk with a landing pad “for inclusion. That way if I’m a student confined to a wheelchair or on crutches, I’m not just taken to the playground and sat on the outside edges of it.”

On the inside, Beatty said with what little square footage that will be added, the plans are to “clean up what was a tight and underutilized area” near the office spaces and conference room.

In the main reception area, access to the nurse and principal’s office are “all within fingertips of reception.” Large, flatscreen televisions will be placed in various areas, used to display different school information and news.

Beatty said existing skylights, ceiling and roof structures were used to accent the public area outside the offices and in the public corridor. “We’ve included — I’ve been referring to it as my Mr. Roger’s bench, it’s the ‘come be my friend’ area …” which has tree-like feature and a bench wrapped around it, with enough room to seat an entire class.

About halfway through the design process, Beatty said those with the school who contributed ideas about necessary changes said there’s a big hallway — what they could do to make it more of a learning environment. The ability to add a sensory path has been included, which can include different activities for children to do on the walkways to the library or gymnasium, in order to “take learning outside the classroom.”

Beatty said the other major impact area of the redesign is the library, which is very small by today’s standards. In order to gain square footage, the design “ate up an existing corridor hallway, we’re going to push the wall out … and create two zones,” which will include a reading nook and a “makerspace station” to function as a technology area.

One of the alternate plans — options to include based on what the financial restrictions are after bids are received — is adding a restroom across from the cafeteria so kids can go directly there after the playground to wash up before hitting the cafeteria, and not have to cross down another hallway.

The gym floors will be redone, “taking the middle school out of it and bringing the Woodlawn feel into it,” Beatty said. The stage will again be able to be used, and more color will be added to the whole space, as well as another alternate available replace the bleachers for maximum seating capacity. An area can also be used for learning stations in the gym for inside play.

Beatty said there has been some fluctuation, “we’ve added some things in and taken some things out,” but maintains the probable cost will stay about the same at $3.4 million. However, now the alternates have increased, with eight total additional plans that may be chosen, at an estimate of $839,000 if everything is accepted. They include the new student restroom, added storage areas, a new building intercom and bell system, audio enhancement systems, an emergency power distribution system and a building-wide camera upgrade, for example.

Now that the board has approved the final design plans, the firm will submit them to KDE for approval within the next couple of weeks, so that “hopefully we’re back in November asking you to set a bid date; we’d be looking at doing that in early December.”

Superintendent Mike LaFavors complimented Beatty on his work, as well as those with Woodlawn who have supplied ideas and opinions. “Just super-creative and I like the feedback he’s gotten from the Woodlawn staff and how hard they’ve worked on this,” LaFavors said, and how happy he was to have so many teachers working on the project.

LaFavors says he’s not “terribly concerned about the estimate” price, and said that’s for three reasons. “First, he has given us flexibility by identifying eight alternates … if the bids come in higher than expected or outside the range of what we can invest … Second thing is that we did take a little bit of a hit on the bonding potential, but that should bounce back a year later, won’t help us here, but down the road. And then we’re sitting on over $8 million in the general fund.” He explained how the system has been planning for this “for years — the board voted in 2015 for the nickle tax, but I would even say prior to that, we’ve been planning for these projects … this road, Woodlawn, the middle school … I’m not terribly scared by that number. That number doesn’t intimidate me, so to speak, I guess.”

LaFavors discussed the monetary aspect more as David Morris gave the treasurer’s report, which included the interest on the construction account growing to $374,000. “In the beginning of it, we thought we’d be $200,000 or $215,000 in interest, so this is one of the advantages of taking a bit longer,” Morris said. He said the interest will probably grow to as much as $415,000 after about six more scheduled payouts.

Morris said this is important due to a drop in the bonding potential, based on the kindergarten rule. A new cutoff date began for the ‘17-’18 school year requiring children be 5 years old as of Aug. 1 to enroll in a Kentucky public school.

“You get $100 per pupil for capital outlay, which affects the equalization of nickels, about $30,000 less, which doesn’t sound like much, but when you bond that out over 20 years, it’s quite a bit,” Morris said.

“But we anticipate recovering that next year and having more bonding potential, due to the kindergarten rule that forced us to have lower amounts of students this year …” which in turn will equate to more students next year, he said.

However, Morris said the system is only sitting at $12,000 less than it was at this time last year.

As far as the bonding potential, LaFavors said “$3.9 million was the last number, the new number is $3.3 million, due to growth factor. But next year, we’ll be sitting on this large first grade, so we’ll get that money back.”

A timeline is still tentative, based on the bidding process, for when exactly the construction would begin.