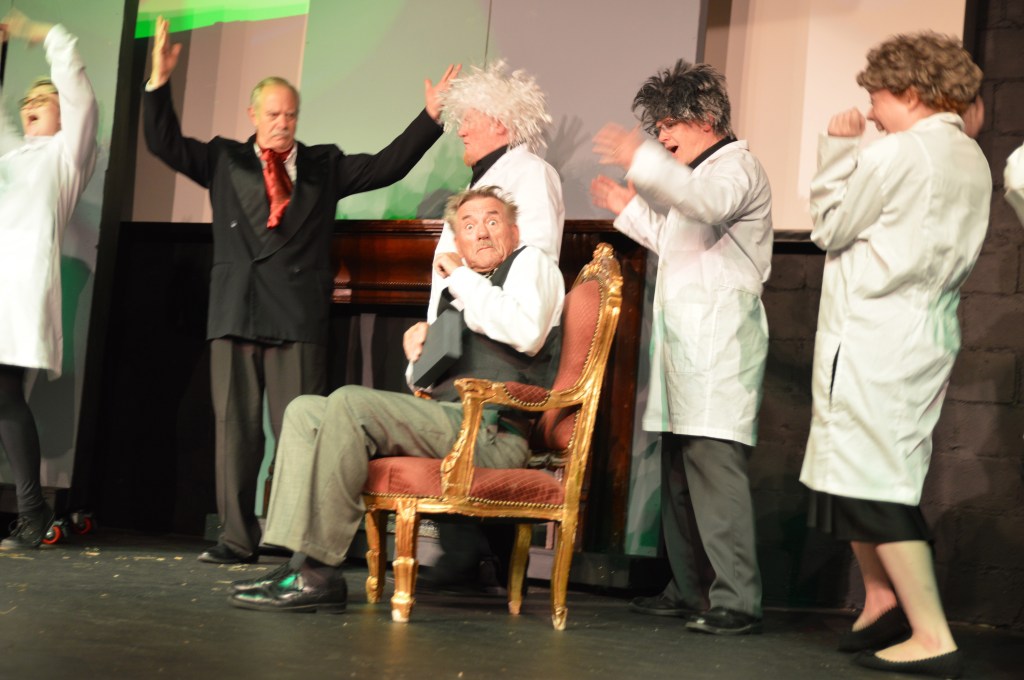 Although based on Mary Shelley’s novel, Karen Logue says the musical “Young Frankenstein” is really nothing like the scary ghost story the author wrote in the 1800s. It opens at West T. Hill Community Theatre on Oct. 24 and runs Thursday-Sunday for two weeks, just in time for Halloween, but playgoers should beware, Logue says: it will be nothing short of a scary-funny romp, and is probably best for “adults only.” 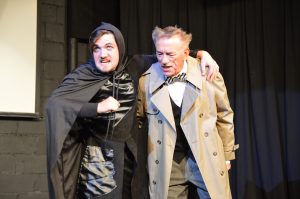 “Mel Brooks took it and made a lot of idiocy out of it,” she says, laughing in the lobby out front of WTH’s stage. And there is laughing everywhere among the 30 or so cast and crew; she says laughter has been an ongoing theme with this production, and it shows on and off stage.

“You know musicals, and people who are able to do them are usually really good. So there’s usually a diva or two in the mix,” she says, but not this time. Everyone shares the spotlight and genuinely supports one another.

“It’s been crazy. Just when you think you’ve seen the best piece and somebody has stolen the show, then somebody else steps up. It just keeps getting better, and it’s just the way it’s written — the genius of the script.”

Logue, who is the theatre’s managing director, loves musicals — not only because of the mere challenge of directing them, but they are always well received. She has the same feeling about this whacky, raunchy ride that is “Young Frankenstein,” filled with incredibly hilarious song lyrics. “And a lot — a LOT of innuendo,” she says.

That’s something Logue wants theatergoers to know — this piece is risque; she’s not quite sure if she’d call it PG-13, perhaps maybe even for 16 or older, she just knows it’s for adult minds.

“But it’s Mel Brooks, you know? I mean, I’m not going to apologize for that. He’s outrageous, and — he’s still alive!” 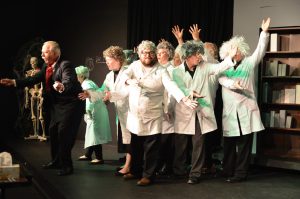 The ensemble cast dances and sings each scene into the next.

Not to mention, in today’s climate, it’s good to not take ourselves so seriously for a couple of hours, she says, and this musical does just that. “Oh, boy does it do it …” she says.

There’s busty Inga (played by Julie Taylor), who serves to tantalize Dr. Frankenstien in her well-fitting dirndl dress as she yodels wide-eyed through the song, “A Roll in the Hay;” Elizabeth Benning (Katie Followell), who performs a hilarious rendition of “Please Don’t Touch Me,” which should create tears of laughter as she goes down the list of naughty things Doc Frankenstein may “do” to her, but only in his mind …

Logue describes the musical like this: It’s basically the story of Dr. Frankenstein’s grandson coming back to the estate after he’s died, to check things out. Frederick Frankenstein is a pure scientist; he wants nothing to do with the macabre dealings his grandfather was involved in. But the people of the town and inside the castle try to convince him otherwise, including Igor — played by Elijah Brown, who pulls off a creepy yet massively funny portrayal of the trusty, humpbacked sidekick who can dance. They say it’s his genetic duty to create monsters.

A lot of work for this ‘wild ride’

Brooks’ movie was released in 1974, starring Gene Wilder, then the musical opened on Broadway in 2007 to “mixed reviews,” however the show went on a national tour in 2009, and a revised version opened in London in ‘17.

“It’s fast-paced; it’s laugh-out-loud funny, and you almost have to make yourself stop laughing, because you don’t want to miss anything,” Logue says.

She’s not joking. As Dale Kihlman, who plays Dr. Frederick Frankenstein, performs “The Brain,” one can only imagine what the song sheet looks like with such verbose lyrics. But Kihlman stays with the music, on beat, enunciating words — with his nervous, always-in-a-state-of-shock personna — that seem to effortlessly roll off his tongue in an amazing fast pace.

“Oh, he’s worked like a trojan, I tell you,” Logue says, shaking her head. Kihlman, who is a longtime actor, doesn’t have any serious musical background. 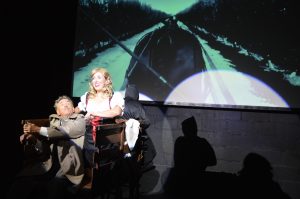 “He’s worked very, very hard. The tempos are quite difficult, especially doing it without a live orchestra,” which it was written to be accompanied by. An orchestra can stay more on beat with the actors, she says, or back up somewhat if need be.

“With the taped musical, it’s very difficult. They’ve gotta keep up or they’re gone, because we can’t go back. The booth also has a difficult job, too, because they’re doing light cues, music cues, sound cues, operating the projection screen …” Chuck Taylor is on lights while stage manager Luanne Littlefield will be running the show next to him, from the booth.

Logue says the ensemble cast — Larry Kendrick, Pete Kendrick, Cindy Hildebrandt, Lyndsi Hersch, Bruce Caudill, Tori Brown, Lori Patterson, D. Todd Littlefield and Sonya Steberl — is nothing short of wonderful. “They do an awful lot of connecting the scenes, and many of them also have other small roles here and there.” There’s lots of fun, choreographed scenes where the ensemble tries to eerily pull Dr. Frankenstein in to what they feel is his chosen calling.

The music director, Casey Tibbles, has done an amazing job, as well, Logue says. “She really knows music. And we’ve got other music people in this, teachers, other people who know their stuff. So that helps me a lot.”

She hopes people can step out of their hectic worlds for an evening, or a Sunday matinee, and step into the crazy, genius, insane world of Mel Brooks’. As long as some hilariously blatant sexual references don’t turn you off, “Then you’re in for a wild ride. And a lot of laughs. I really can’t wait.”