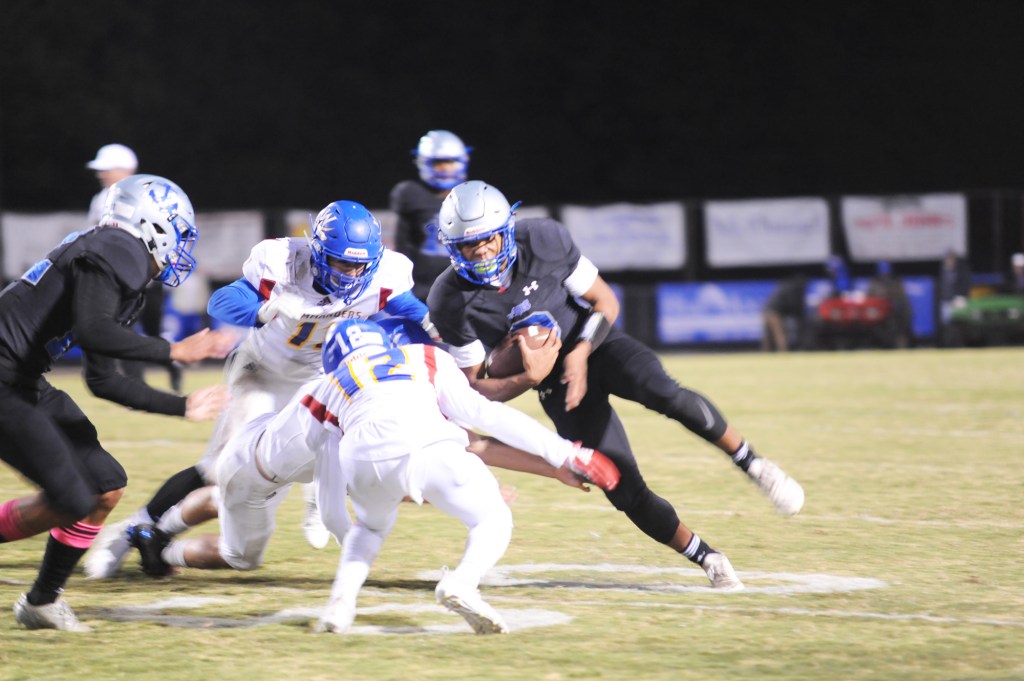 Danville needed a win Friday night in a big way. After dropping the district opener at Somerset last week, a loss to Washington County would sink the Ads chance of hosting a playoff game. And Clay Clevenger’s team came out and answered the call on senior night to keep the chance alive that it wouldn’t be the final home game for the seven seniors honored with a 34-18 win to improve to 3-5 on the year.

“It’s good, obviously for our seniors. We’ve got four that’s been with this football program all four years so it’s good for them to get the win,” Clevenger said.

The game started off with both teams unable to pick up a first down in their opening drives. On Washington County’s second drive, senior Darrian Bell made the first big play with an interception and a return to the Commanders’ 28 yard line. On the first play from scrimmage in the Ads’ second drive, Caleb Burns made the second big play of the game with a 28-yard untouched touchdown run. 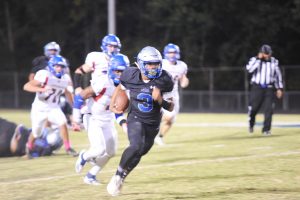 Burns breaks away from Washington County defenders as he did all night. (Photo Derek Brightwell)

Burns would go on to have a monster game, racking up 280 yards and two touchdowns on 26 carries. In the second half, in particular, Burns ran like a man possessed, breaking through tackles at will and eluding anyone he couldn’t run over.

“He ran hard and ran behind his pads. He’s really been coming on and running hard all season,” Clevenger said about his sophomore back. “I think our offensive line did a really great job. Especially early in the game they were blowing guys off. They kind of switched up and went to a funky front on us and shot some gaps. Caleb was able to make some guys miss.”

After Burns carried the load for another drive to get the Ads into the red zone, freshman quarterback Sage Dawson executed a play action fake and kept the ball to dart five yards for a score to put the Danville up 14-0.

Washington County would end the first quarter by building a solid drive, led by the athletic efforts of quarterback Jatavian Churchill. But after changing ends of the field, Danville was able to get two fourth down stops — one called off on a pass interference penalty — to get the ball back. 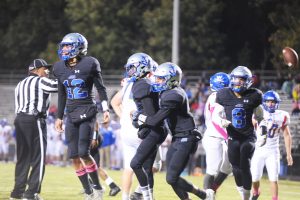 The ensuing Danville drive was stopped in the end zone when Javantae Wright picked off a pass. The Ads had a little bit of hope when Wright fumbled the ball during the return, but the Commanders fell on it and started their first scoring drive. That drive was capped off by a Mike Ellery TD run, but a failed 2-point conversion meant the score was 14-6. Still, Clevenger felt his team didn’t have the same energy it came out with.

“I thought we came out early and were playing pretty sharp. Then we got up 14-0 and we relaxed a little bit defensively. After that, it was kind of a back and forth,” he said. “They have some playmakers and they came out and made some plays. We had a big goal line stand there in the first half that ended up being really big for us. But we need to do better on third down. We need to get off the field.”

The Ads got the ball back with 1:22 left in the half and were able to score with only 30 seconds left when Dawson hit Corydon Crawford for a 28-yard touchdown pass. And on Washington’s next drive, Churchill looked to have connected on a deep ball to Ellery, but as Drysten Turner was bringing him to the ground, the ball slipped out of Ellery’s hands and into the arms of Turner. Danville couldn’t get on the board before the half ended, however.

The third quarter went by quick, as neither team was able to get on the board, but Danville did build an impressive drive to end the quarter and on the first play of the final period, Keelan Story scored from three yards out to push the lead to 28-6. 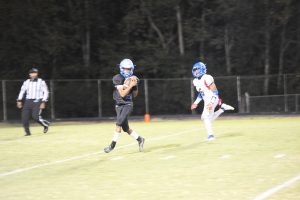 Churchill answered with his first rushing TD of the game to answer back, but another failed 2-point conversion meant it was 28-12. Special teams was a problem all game for the Commanders, who never attempted a traditional PAT and always went for onside kicks.

But the Commanders weren’t done, and put together an impressive drive that looked like it would stall after four consecutive fumbled snaps. The first one, Churchill was able to convert to a big passing play and the last one was good for a TD run — his second of the game.

“(He’s)a really good football player and he made a lot of good plays against us tonight,” Clevenger said. “We got to sure up things in the secondary. We weren’t really crisp back there. We’ve got to play the ball a little bit better. We’ll see where we’re at.

“We play a really good executing football team next week in LCA so we’ve got to be a little sharper in our defensive execution next week.”

That game against Lexington Christian Academy will be for the right to host a playoff game in the first round, and that’s something that Clevenger wants his team to understand this week of practice.

“We talked about just now when we got done. We have a chance to go — the season hasn’t quite gone like how we’re used to going here around Danville but for the most part we still hold a lot of our own destiny,” he said. “We haven’t played our best football yet so if we keep working and grinding — next week is going to be a really big game. Then we get an open week and a chance to get some guys back and make a little run here.”