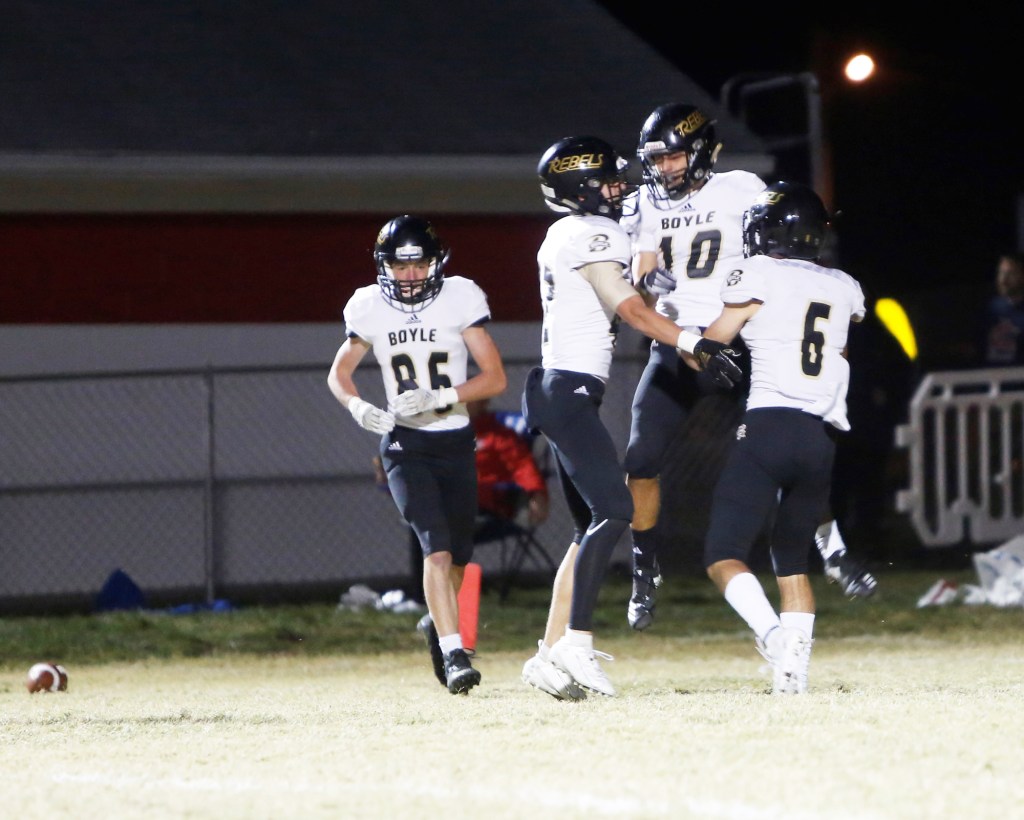 LAWRENCEBURG – It wasn’t Boyle County’s best, but it was more than good enough.

The Rebels were coming off a stretch of three games against marquee opponents that figured to be the centerpiece of their schedule, so it shouldn’t have been surprising that Anderson County didn’t have their full attention Friday night.

Even so, they had little trouble pushing past Anderson County in a 52-7 victory that marked the fifth time in eight games they have scored more than 50 points and the sixth time they have held an opponent to seven or less.

Reese Smith scored three touchdowns and Will McDaniel scored two for visiting Boyle (8-0, 2-0 District 4A-5), which pulled away with four second-quarter touchdowns. 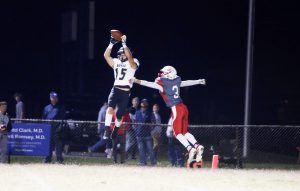 Reese Smith of Boyle County rises above Anderson County’s Sam Harrod on a 20-yard touchdown reception during the second quarter Friday. It was the first of three touchdowns for Smith. (Photo Mike Marsee)

“We did a good job of finding a way to get the points on the board and win the game,” Boyle coach Chuck Smith said.

After the Rebels had stormed past Louisville Christian, Highlands and Lexington Catholic by a combined score of 165-52 in its previous three games, it was easy to understand how they might not be as sharply focused this week.

Chuck Smith understood that, too, but he didn’t have to like it.

“It’s hard to get fired up for games back to back to back to back. But the great teams, they’ll figure out how to handle it … and they’ll approach the game as a business trip,” he said. “We did a good job of finding a way to get the points on the board and win the game.”

The Boyle coach said his players didn’t get appreciably better in practice this week, and he said it showed early in Friday’s game.

“From a coaching standpoint, what they’ve got to understand is we’re looking at a big picture here,” Chuck Smith said. “We’re trying to get better every week, and if you don’t get better, you’re really getting worse.”

Anderson (4-4, 0-2) actually led for 13 seconds in the first quarter after Zach Labhart broke through the center of the Boyle defense for a 70-yard touchdown run that put the Bearcats up 7-3.

Gray Rahbany provided a counterpunch when he returned the ensuing kickoff 79 yards for the touchdown that put the Rebels in front to stay, and Anderson never got within less than 25 yards of the end zone for the rest of the night.

Chuck Smith said there didn’t appear to be any one single play or event that untracked the Rebels.

“They remembered me telling them that this was probably going to happen because we hadn’t done a good job of preparing,” he said. “I don’t think it was any one thing out there on the field, but I’m glad whatever it was happened.” 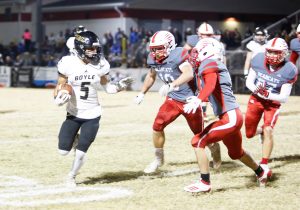 Cash Logan (5) of Boyle County attempts to keep Anderson County players at bay as he returns a punt during the second quarter Friday. (Photo Mike Marsee)

Boyle led 38-7 at halftime, and Landen Bartleson’s 1-yard touchdown run less than two minutes into the third quarter triggered the running clock for the sixth time in eight games.

The Rebels ran only 26 offensive plays but still outgained Anderson 296 yard to 169 with an average of 11.4 yards per play.

They scored once on special teams – Rahbany’s kickoff return – and once on defense when McDaniel returned an interception 76 yards to the end zone in the second quarter just minutes after he scored on a 45-yard run.

“Our kickoff coverage team has returned three kickoffs for touchdowns this year, and Gray’s had all three of them. That’s pretty awesome right there, and that’s really a big boost for your team,” Chuck Smith said. “And Will McDaniel, as much as anybody, kind of got this thing turned. He had that big run and then had a pick-six. He had a really nice game.”

Reese Smith caught touchdown passes of 20 and 56 yards from Reed Lanter in the second quarter, and he recovered a fumble in the end zone for a touchdown in the fourth.

Lanter completed 12 of 16 passes for 173 yards, and Reiley Colwick led Boyle’s receivers with four catches. McDaniel had a team-high 57 rushing yards on only three carries.

Jackson Smith opened the scoring for Boyle with a 36-yard field goal that capped the Rebels’ first drive. He is 4 for 4 on field goal attempts and 51 for 51 on extra-point kicks.

Wilson Kelly had four tackles for loss for the Boyle defense.

Anderson quarterback Jagger Gillis was 4 for 6 in the first half, but he finished 6 for 15 for 38 yards. Labhart rushed 13 times for 101 yards for the Bearcats.