Confederate statue due to be removed from local church lot 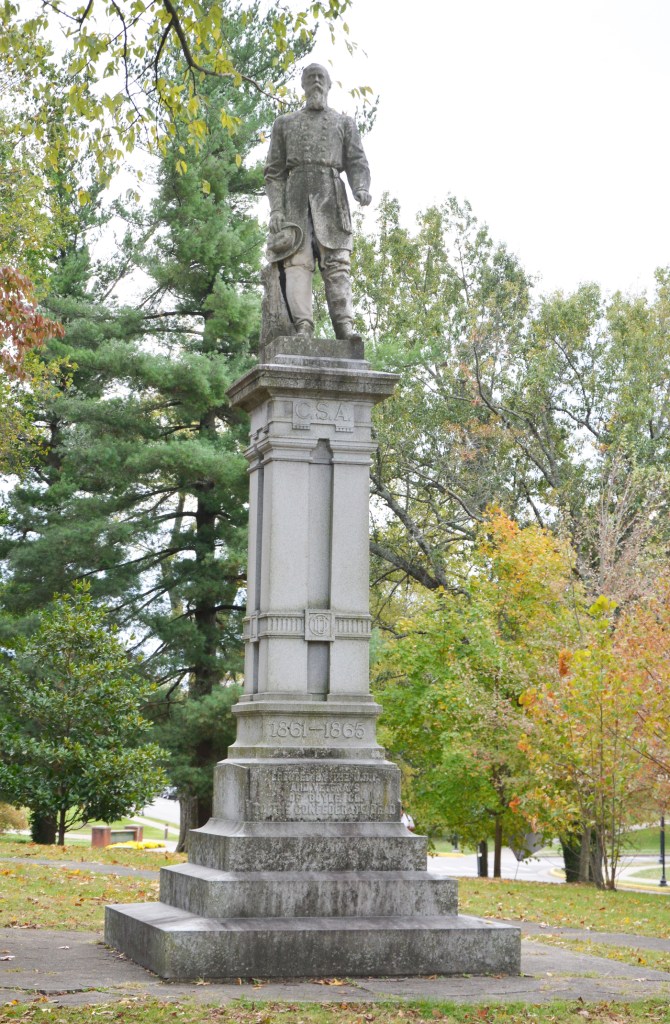 (Robin Hart photo) The monument located on The Presbyterian Church of Danville's lot is of Confederate Capt. Robert E. Logan.

The Presbyterian Church of Danville is planning to move a Confederate statue from its current location on church property along West Main Street to a lot in Bellevue Cemetery.

A news release from pastor Caroline Kelly about the plan states the church has “prayerfully considered” the Confederate monument for the past 18 months, and how it “affects the church’s ability to serve God and this community. This process included thinking about the church’s long history with the monument … and our theological obligations to God and community. As a result, the Session has voted to remove the monument.

“It is our belief and hope that our church and our community want to be welcoming to all people, and that the current location of the monument on the church’s property is contrary to our purposes as citizens and Christians.”

The release says there are “many reasons” for the decision, and listed the top three considerations:

The release states the current location on church property was “a compromise location that is no longer appropriate, as this land is now private property.”

The release says The United Daughters of the Confederacy and the Sons of Confederate Veterans groups that erected the statue in 1910 originally wanted it in Bellevue Cemetery.

“Our understanding is that McDowell Park, then owned by the City of Danville, was the compromise location. In 1881, the church deeded the property to the city and for most of the 20th Century, the property served as a public park.” But the property was deeded back to the church in 1993.

Letter to the city

A letter was sent to the City of Danville on behalf of the church asking for approval to move the Confederate statue to Bellevue. But City Attorney Stepehen Dexter strongly warned the commission against getting involved last week.

The church, 500 W. Main St., sent the letter to City Manager Ron Scott from pastor Kelly. At last week’s city commission meeting, Scott told commissioners the church requested that the “city accept their decision to move a statue of Confederate Capt. Robert E. Logan from church property to be located within proximity of the Confederate section of Bellevue Cemetery.”

“They are requesting approval to move the statue to the new location in Bellevue because they believe it’s more fitting for the statue, and to give it a greater ability to be saved from potential vandalism,” he said.

Scott said the letter does note that all expenses associated with the move of the statue will be paid for by the congregation of the church, “and no city taxpayer dollars will be involved in the move.”

Scott said the letter stated it would also “remove what they consider is an impediment to their work with all members of our community, because of the historical context in which that particular statue was erected.”

“I’m not really sure what that means,” said Joni House on Monday. House — a local historian — said Pastor Kelly contacted her for some input when she knew that relocating the statue was the aim of the church.

House said she assumes the church’s concerns could have to do with racial history in the U.S. — Jim Crow laws, racial segregation, or the Lost Cause, an ideology many say denies the role of slavery in the outbreak of the war.

“I do know Robert E. Logan was a member of Company A of the 6th Kentucky Cavalry, and his very first battle was in Perryville,” House said.

Scott told commissioners that the church said it had consulted a variety of local historians, preservationists and experts.

“While perhaps all of them prefer it remain in its current location, all of them agree that Bellevue Cemetery would be the best and most historically appropriate alternative. They have received support for this move from the local chapter of the NAACP, and they suggested the new location is the best choice for our community,” Scott said.

The church had previously spoken with House about the possibility of moving it to Perryville Battlefield State Historic Site.

“The problem with that is it’s not where the 6th Kentucky actually engaged — they were more toward Lebanon, out on U.S. 68,” she said.

Scott said the church is working on finalizing cost details and a schedule to move the monument, “assuming approval of the city to grant authority for the purchase of the appropriate site, which staff has identified with the church as being at a location in proximity to the Confederate section.”

He said the city commission needed to vote to approve it and City Attorney Dexter needed tp create a memorandum of agreement covering all elements of the move and any liability associated with it.

Commissioner Denise Terry asked if the Danville Cemetery Committee had been included in the conversation.

Scott said the committee has had “conversations” about the plan, but “I don’t know if they’ve taken a formal position on the request to relocate it … Although there are issues, practically speaking, of how to move a very heavy statue in the cemetery without it creating damage.”

Dexter had a different take on the issue.

“I’m not 100% positive the city needs to approve or disapprove of the location of anything, or be involved in this matter for more than just a selling of a lot,” he said.

Dexter said anyone can purchase a lot in Bellevue and place a monument there. If it’s within the policies and procedures of the city, “then no further action of this commission or staff is necessary. We can delve into it further … but the city doesn’t own that statute. … the city’s blessing or approval or disapproval is irrelevant.”

Scott said there could be “certain liability issues” involving the statue and the potential for damage caused when it is transported. Those issues “would probably be better clarified with an agreement,” he said.

“I don’t know that the city has a dog in this fight,” Dexter said. “… I would caution the city of even getting involved in a matter of this level.”

Dexter said he also doesn’t think the cemetery committee needs to be involved.

“We don’t regulate what kind of monuments are placed on graves. I mean, do we? There might be some type of restrictions … but I would be careful because it starts to look like a regulation of speech,” Dexter said.

Scott said based on Dexter’s clarification, “we could proceed without the city commission speaking on this issue, if that’s the course of action recommended.”

“I’m just saying let’s continue to vet it, but at this point I don’t know if it rises to the level of the board of commissioners getting involved,” Dexter said.

Mayor Mike Perros said his concern is damage to the roadway and to the entrance of the cemetery.

“We also have an 18-ton piece of stone — you can’t just sit that there, because once you do that, it becomes our obligation. So I think an appropriate foundation should be part of the requirement so that it doesn’t become a cost to the taxpayer later on.”

Dexter said he would be reviewing how Lexington handled the relocation of its Confederate statues, “just as a best practice model.”

House said when the pastor reached out to her, “I said look, as a historian — and I’m not representing anything or anyone else, just my opinion — it’s an irresponsible thing to do.”

She knows the statue is owned by the United Daughters of the Confederacy, who were apparently notified of the desire to move it.

“But you know, it’s such a controversial issue … and again, I’m speaking as a historian and not for any organization — and I think it’s a giant mistake to remove these statues,” House said.

In her opinion, a good alternative would be to contextualize the statue and talk about what was going on when it was put up. She referenced what the cities of Franklin, Tennessee, and Richmond, Virginia, have done, and said she hopes locally, people will follow their leads of using context with old monuments.

“Use it as a history lesson. We all have issues with what has went on in the past, but if we continue to sterilize history, how will we learn from the history lesson? And people are very proud of their ancestors’ battle histories, too.”

House said it’s no good to apply “20th-century politics with people who were living 158 years ago. How will they know what our life was like if we do that?”

House said she doesn’t think it’s good to “sanitize” what happened in history.

“Use it as a teaching tool,” she said. “… We can’t learn from anything if we just get rid of it.”

Online reports show Logan was actually from Lincoln County, but lived in Boyle after the war.

“He was also one of the Immortal 600 — they were the Confederate prisoners that the Union Army moved — very famous. He was one of those guys,” House said, referring to the 600 Confederate officers who refused to take an oath of allegiance to the United States under duress.

The Capt. Logan piece was one of 60 Civil War monuments in Kentucky placed on the National Register of Historic Places in 1997, as part of the Civil War Monuments of Kentucky Multiple Property Submission. According to online reports, it was dedicated in 1920 by the surviving veterans of the Confederacy of Boyle County and the United Daughters of the Confederacy. It is described as having a granite pedestal and marble statue.

Logan died 14 years before the construction of the monument.

Press release from The Presbyterian Church