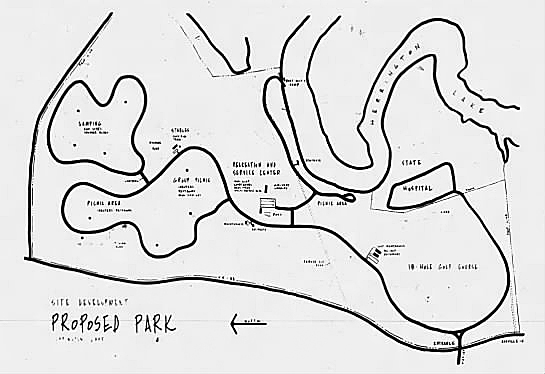 Bicentennial State Park, located on state-owned land adjoining Kentucky State Hospital, which is not Northpoint Training Center, was going to include camp sites for 500 cars, an 18-hole golf course and boat docks on Herrington Lake.

Governor Louie B. Nunn announced that Boyle and Mercer counties were going to be the site of a new, 1,000-acre state park on this day in 1971. The area, located next to the Kentucky State Hospital, which is now Northpoint Training Center, was going to be known as Kentucky BiCentennial Park, according to the front page story in the Advocate-Messenger on Oct. 22, 1971.

Nunn said the park would be complete in time for the state’s 200th anniversary celebration in 1974.

The state-owned land was going to include 500 campsites, an 18-hole golf course, a boat dock and ramp on Herrington Lake, picnic and playground areas, play fields, game courts, a grocery and laundry facilities.

Nunn said the park “will provide an extensive camping area for the visitors expected to swarm into this region during Kentucky’s 200th birthday festivities.” Because six state shrines were within a 25-mile radius of the planned park, “combined, they will make up one of the most important areas of historic interest during the celebration,” according to the article.

The governor’s stop in Danville was part of his multi-county Greyhound Bus tour which started in Harrodsburg and stopped in Danville, Somerset, Jamestown, Columbia and Brownsville, where he made other announcements and dedicated several new state buildings.

While in Danville, Nunn also announced plans to double the size of Constitution Square State Park by acquiring property from Danville Urban Renewal Agency for a cost of $102,000.

At Kentucky School for the Deaf, Nunn dedicated the new $1.5 million elementary school. He also announced plans for a new $1.3 million physical education building that would include a gym, a 25-meter swimming pool, locker rooms, wrestling room, therapy room and first-aid room. The article stated that the new facility would replace the old, obsolete gym that had been built in the early 1920s.

KSD was also going to get a new heating plant and change the system to oil and gas fired boilers in place of soft coal. According to the article, Nunn said the new plant would be more efficient and would remove one of the remaining sources of pollution in Danville.

On Nunn’s first stop in Harrodsburg, he announced that $150,000 had been set aside to be used for an expansion and improvements at Old Fort Harrods State Park.