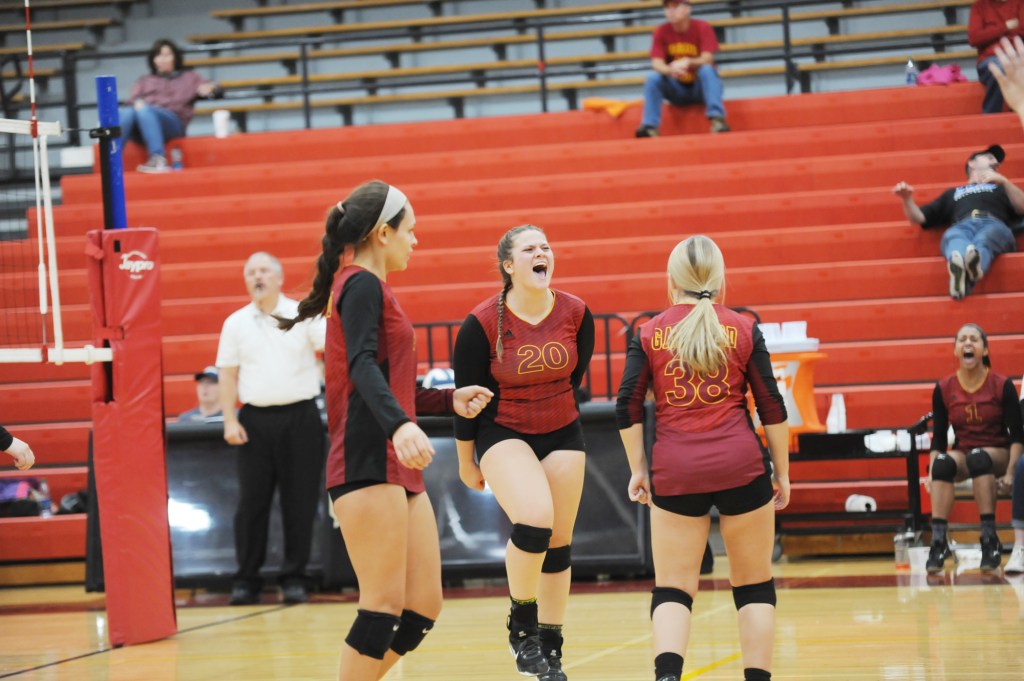 Back and forth is the name of the game of volleyball, and Monday night’s first round district tournament match between Danville Chistian Academy and Garrard County was as back and forth as it gets.

It took five sets, a lot of points and several extended volleys for the Lady Lions to win and move on to the second round of the district tournament.

“It means a lot. Our girls have had a rough season,” Garrard coach Hannah Johnson said. “To be able to come in and make it to the second round of district.

“Last time we played them — they beat us the first two and we beat them in the second two and then they beat us in the fifth,” DCA coach Jeannie Gayle Hurst said. “It was the same way. These two teams are just so competitive against each other. They have worked — both teams. Garrard County busted it too tonight. They were awesome. Trying to come back and not get down. Both teams deserved it.”

The Lady Warriors came out fast and took the first set 25-17. In that set, neither team had a rally of longer than three points and it set the tone for the whole match. The first set was highlighted by multiple long points that saw each team getting it over the net around five times before one team scored. That would be the trend for the whole match.

DCA took the second set much easier, winning 25-14, with the set turning on a seven point rally that the Lady Lions couldn’t climb back from. After the last point was scored, the Warriors fans in attendance could smell a win in Danville Christian’s first ever KHSAA tournament match.

But Hannah Johnson’s team wasn’t willing to let their district run end in a three set sweep. Again, no team could sustain an extended rally and 25 points was not enough to declare a winner of the set. In the end, the Lady Lions scored a 26-24 set to keep their season alive.

“I just told them to fight for it if they wanted it,” Johnson said she told her team after going down 2-0. “If they want to keep playing in district and keep playing on their home floor, they have to fight for it. I think they underestimated DCA. They’re a great team and they’ve got a lot of talented players.”

With a little momentum on their side, the Lady Lions controlled the fourth set, winning 25-18 to send the first round match to a decisive fifth set. By the end of the fourth, both teams appeared to be winded from the length of the match — which ran over two hours in length.

“It’s hard on them. We play all year three out of five when we can. We train them to be able to play five sets,” Johnson said. “But we haven’t gone to five sets a lot this year so it was definitely hard on them. It was a hard fight. A lot of my starters stay in most of the game. They don’t get a lot of time out to rest. We just have to keep our momentum up.”

Late in the match, DCA gained some momentum from a loud fanbase that came with them for their first district match. Even though Garrard was the host team, it sounded like a Lady Warriors home game for stretches of the match. But the Lady Lions didn’t falter and were able to pick up the win, even among the DCA chants.

“I’m extremely proud of them. It’s hard to play under that kind of pressure and to have an opposing team yelling and screaming and you not having anything,” Johnson said.

For DCA, even if the season is over, it was still a historic one for a team in its second year of existence and first year in the KHSAA. 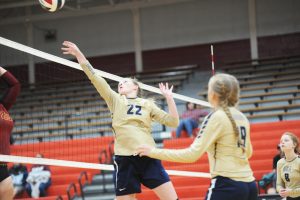 “I am so proud of my girls. They played — they’re just strong and courageous. That first team that has to step out. You take a few knocks,” Hurst said about her team’s season. But they are leaders and are blazing the trail for those who come behind and I just cannot tell you how proud I am of them. Words just can’t express how much I love them and how proud I am.

“I’m just so excited for the players and what they can do but for the school. It’s such an amazing school. To be able to have great athletes and great programs and a Christian atmosphere. It’s just amazing,” she added about the growth of the school and athletic programs. “I see nothing but great things for the volleyball program and all of our sports programs and DCA in general. As we grow — we just opened our new gym. Everything is just so exciting right now.”

Garrard County will face top seed Danville on Tuesday. Coach Johnson’s message to her team is a short one: “Just be ready for a fight.”