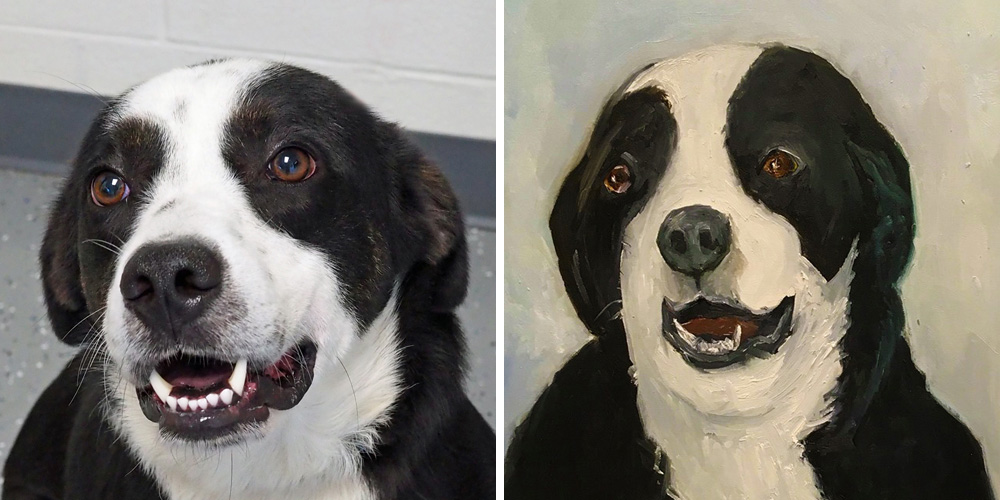 Rufus, a dog available for adoption at the Danville-Boyle County Humane Society, is the first lucky pet to come with a painting by well-known artist David Farmer. Farmer is painting a portrait of one adoptable pet every month for six months, and whoever adopts the pet gets the painting, too. (Photos submitted) 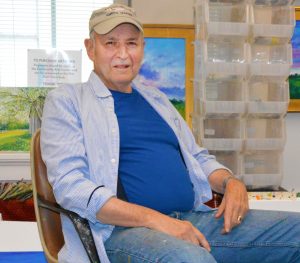 Bobbie Curd photo
Artist David Farmer came up with the idea to contribute a painting per month, for the next six months, to the Danville-Boyle County Humane Society. An animal lover, Farmer says he can’t adopt any, so he came up with a way to help with adoption rates. For each animal he paints, whoever adopts them gets the Farmer original oil painting as a gift.

A local artist who is an animal lover has decided since he can’t adopt a pet, he’ll take another avenue in order to hopefully get more adopted. David Farmer will be contributing a monthly pet portrait to the Danville-Boyle County Humane Society (DBCHS). Whoever adopts that animal will become the owner of the contributed painting.

“David wanted to use his resources and talent to help some special dogs and cats who have been at the shelter longer than others,” said Fizzy Ramsey, board president for DBCHS. She said Farmer told her he’s not in a position to adopt a pet at this time.

“So, rather than helping one dog, he hopes to help a dog or cat each month through additional attention and publicity,” she said.

“I just can’t adopt right now, so to help them, I thought this may be an added incentive,” Farmer said, from his artist-in-residence upstairs studio at Art Center of the Bluegrass. He said he’d been toiling over the idea for a while, and finally reached out to Ramsey to see what she thought about it.

Farmer will provide one 16×20 oil painting per month for the next six months to the shelter.

“These portraits run about $500, so that’s a $3,000 value given to DBCHS! When the selected dog or cat is adopted, the adopter will receive the David Farmer original as a gift,” Ramsey said.

She said Rufus is a perfect example. 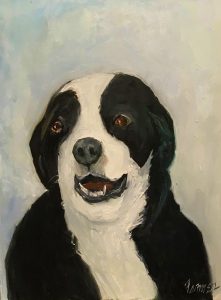 Submitted photo
Rufus is David Farmer’s first subject from the Danville-Boyle County Humane Society. Whoever adopts him will receive the Farmer oil painting as a gift. “It’s just a way to give back; I love animals,” Farmer says.

“He is a wonderful dog who wasn’t given the best opportunity in his youth.” Ramsey said Rufus was found abandoned in a home and brought to the shelter by animal control. He is fixed, microchipped, vaccinated and ready for adoption.

“He is full of energy. Rufus needs some additional leash training, but he will make a lovable and very loyal companion,” Ramsey said. She said he gets along with other dogs, “loves belly rubs and has an affinity for water and lively playgrounds. He’s just great.”

Farmer said if he was able, he’d have a house-full of adopted animals. “But since I can’t, I thought this may be one way that animals who have been there for a bit could get a leg up on finding a new family.”

He said he told the shelter, “I’d do a mutt a month, or a mammal a month, I should say — since cats are included too. They select them and send me the picture.”

Farmer and his wife previously adopted a dog from DBCHS, and had the pet for 12 years. “I love animals, but I’m not in the situation where I can have one.” He said he feels a lot of “compassion for the animal kingdom.”

And, he said, let’s just be honest — “Man has made a hell on earth for the animal kingdom. I know how ill-treated they can be (by humans).” He said he sees pictures all the time on social media, showing rescued animals, and what humans have done to them.

“Man will never create a heaven on earth, unfortunately.” But Farmer said the local shelter does the next best thing with its care and amenities.

“We are grateful for his willingness to bring his vision to life. We are ecstatic to see ‘adopt local’ meet ‘Art Local,’” she said, referencing the recently created arts slogan in use around Danville and Boyle County. It’s just great.”

“It’s just my love for the animals … A lot of other people are able to go out there, donate with their time and abilities, walking dogs or things like that,” Farmer said. “This is just my small way to help the problem.”