Admirals can’t climb out of first half hole 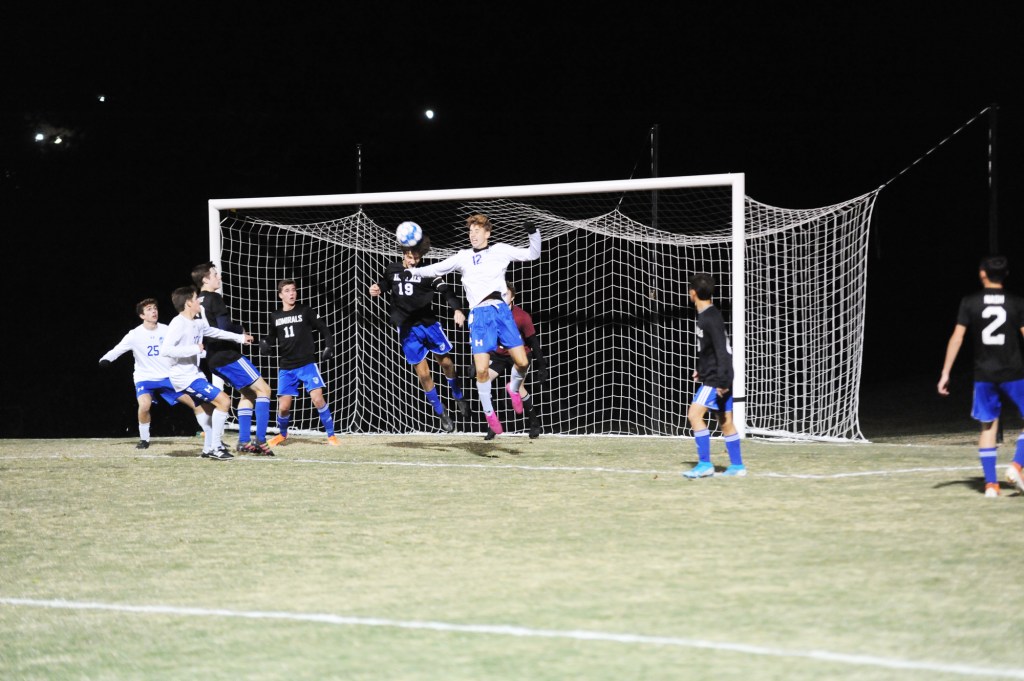 The Danville Admirals season has come to an end via a 6-3 loss at home against Highlands in the first round of the state tournament.

“I just said I loved them and I’m proud of them. They fought to the very end,” an emotional Brent Beauman said after the game. “(Highlands is) a really good team, but we played with them for a very long time. Of course I wish things would’ve gone different, but we didn’t quit. We didn’t start arguing and fighting. They just stuck together and went through it.”

In the first half, the Admirals fell behind early when Highlands senior Caymon Stevie put the ball in the back of the net after avoiding Danville defenders in the box in the third minute.

In the 11th minute, Briar Sanders punched a free kick into the box that found Seth Brunner’s head for the equalizer. But a minute later, keeper Keeton Burnside mishit the ball while trying to clear it and it went right to Stevie who put it in before Burnside could get back to put the Bluebirds back up.

Highlands extended the lead to two goals when Porter Hedenberg’s throw in found the back post and the foot of Max Farris who’s initial shot was saved, but he played the rebound for the goal.

Danville fought back to score again when Remi Forlevil took control of the ball and fought through a tough Highlands defense to fire a ball in from about 15 yards for a goal.

But Highlands would again score off of a bizarre play when Brunner was shielding Colin Pieper and Burnside was running up to grab the ball. Pieper was able to poke it free through Brunner’s legs and it slowly rolled into the open net.

“Several of the goals were just stuff I’ve never seen before,” Beauman said. “Just mistakes that were bad timing.”

Ethan Redmond was able to close the gap and give the Admirals some momentum going into the half. He took a long pass from Ryan Clarkson and sprinted with the ball from about midfield and sent a rocket into the net as the Danville student section erupted. And as the horn sounded, the Admirals went into the half down 4-3 after one of their worst halves of the year. 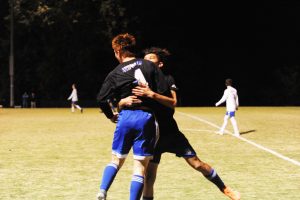 Ethan Redmond jumps into Ashton Nash’s arms after scoring a goal in the final minute of the first half. (Photo Derek Brightwell)

“That’s what I told them. We played one of — probably the worst half that first half with silly mistakes. And we were only down a goal,” Beauman said. “If we could only play our game and do our stuff there’s no telling what could happen in the second half. It just — sometimes it doesn’t bounce your way.”

But in the second half, a foul called on Brunner in the box that was debated on the field gave Highlands a penalty kick that Stevie put in for the hat trick and to extend the Bluebirds lead to 5-3. George Gates added an insurance sixth goal later in the half to seal the deal for Highlands.

After the game, Danville seniors held younger players who were in tears, and hugged coaches. All of them came up to Beauman to share words and give hugs to their coach. Beauman was visibly emotional after the game, and had nothing but praise for his team.

“I’ve known some of them since they were in kindergarten and elementary school,” he said. “I knew — even at that age — that when they got to high school they were going to be a special group and they turned out to be a real special group.

I told them they were with me through the hardest part of my life. The way the responded with Lucy and being a great team throughout all that,” he added, talking about his daughter’s battle with leukemia last year. “I’ll never forget them. Just a fantastic group of young men.”

He specifically talked about his senior class, who played their last game for him on Tuesday night.

“They’re just super high class and they love the game and each other. They love this team. It showed tonight.”

But looking forward, Danville got a lot of great play from freshman and sophomores as well as the junior and senior classes. That’s something that Beauman has always relied on and is optimistic about the benefits it will have for his program going forward.

“We had to and that’s going to be huge for them going forward. I’m sure schools that big don’t have freshmen and sophomores getting that much time,” he said, referencing a Highlands team that fielded 19 juniors and seniors. “That’s big for us and we’ve always relied on it and it’s done us well so far.”

The state tournament continues, with Highlands taking on Henry Clay on Thursday, Oct. 24.