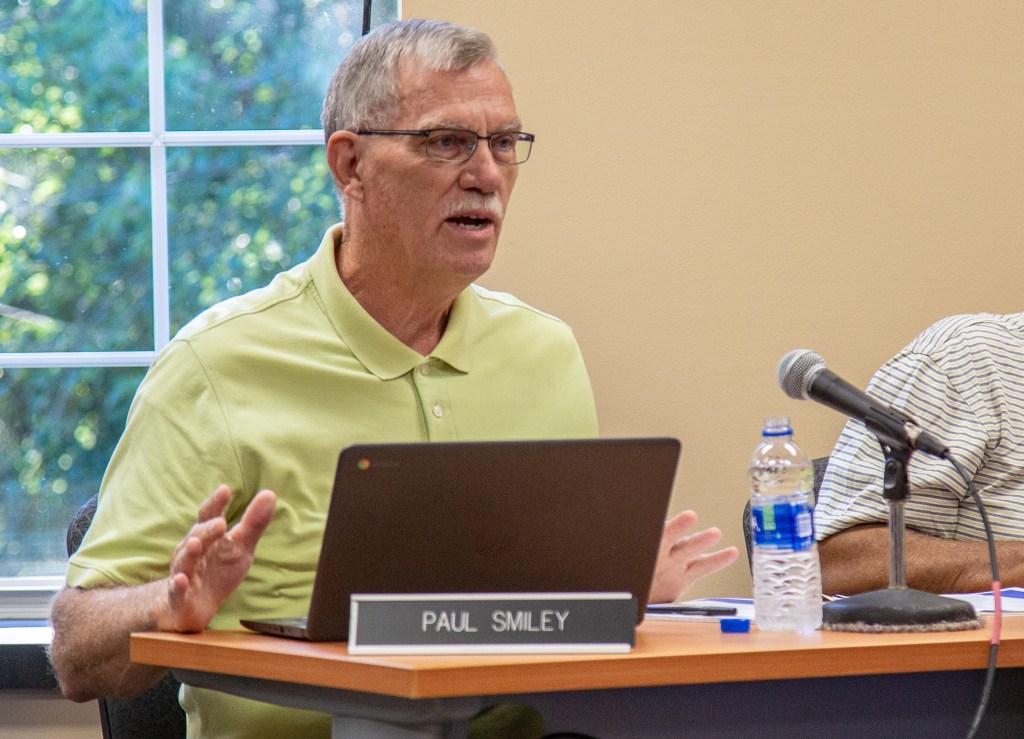 Paul Smiley speaks during a Danville Board of Education meeting in September. (File photo by Ben Kleppinger)

Danville school board member Paul Smiley expressed his “vote of confidence” in the district’s site-based councils, superintendent, teachers, principals, staff and students who are “giving their best effort for educational improvement.”

“The school board is ultimately responsible for all school business and education within the Danville schools,” Smiley said from a prepared statement during Monday night’s school board meeting. He was responding to last week’s comments by board Chair Steve Becker, who Smiley said made an emotional speech based on personal opinion, which did not reflect all of the board members’ way of thinking.

“I was concerned that people would think that he represented the whole board when he did not. I would like to clarify that Mr. Becker did not represent the school board with his comments. There was no discussion or information shared prior to his speech. It was entirely Mr. Becker’s information and opinion,” Smiley said.

During last week’s working session, Becker said the site-based councils were in charge of school test score improvements and not the school board. “We’ve got to have you guys get serious and realize we can’t stay on the same path,” Becker told site-based council members.

Smiley explained that “up north, when things might get a little tough — teachers are working hard and the staff are working hard — people in the community step forward and make comments they call ‘a vote of confidence.'”

He said speaking personally and on behalf of others in the community, he wanted to publicly give a vote of confidence to all of the site-based councils. “I believe they’re working hard and are moving forward. I think they’re going to continue to do a good job.”

He also said he had a vote of confidence for:

Smiley said Superintendent Tammy McDonald has only worked with the school system for about a year and had already made changes to improve academic performance.

“Do not consider the last 10 years (of state assessment scores) but look at the first year of our new superintendent. … She’s made changes, moved personnel; she’s got things in order.”

Smiley said, “Let’s not look at the other nine years. Let’s look at one year and give her time. I have a vote of confidence on the school board also working with this superintendent. … I believe that we will be successful.”

Smiley said he recalled that during a debate of school board candidates in 2016, he was impressed by council member Troy McCowan’s comments about the need to improve parent involvement with their children’s education.

He agrees and said, “A vote of confidence goes out to the involved Danville parents and I hope we get a lot more of them.”

Continuing to read from his statement, Smiley said the board’s recently adopted strategic plan will take time to demonstrate students’ academic improvement. “I have complete confidence in the leadership, teachers, parents —  if we all pull together, as Steve said at the end of his talk — that we will achieve and we will be successful.”

Council member Glenn Ball said he wanted to also compliment McDonald on quickly making academic changes when she came on board. Once she recognized possible causes of low state test scores, she “not only reacted but was proactive and turned around some systems.” “Accolades go out to her. A vote of confidence.”

Becker said, “I know I came across pretty passionate. Some people said I was a little harsh.” Then, he added, “If I came across that way, I do apologize. But I’m not going to apologize for the things that I said.”

He added that the board, site-based councils and teachers need to work together. He said the school board is hoping to start working with the site-based councils “in some type of structure. We’re not sure where that’s going. We want to work with the superintendent, principals and some of the council folks so we have more communication going on between the board of education and the site based councils. That will happen very quickly.”